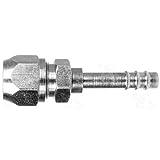 In March, the news broke that Volkswagen would unveil a production version of its T-Roc crossover concept. Now, just two months later, we get to see the thing on the road.

Since it’s still well ahead of the T-Roc’s alleged 2019 debut, Volkswagen’s video shows off a T-Roc bedecked in car camouflage, which makes it hard to figure out the car’s various angles. But, from what we can see, it looks pretty similar to the concept that debuted back in 2014.

While it’s unlikely that the T-Roc concept’s removable roof panels will head to production, the rest of its tech seems pretty safe to land at dealerships. It features a digital gauge cluster, something Volkswagen also offers on the refreshed 2018 Golf, and plenty of LED lighting. Whereas the concept was a two-door affair, this video clearly shows a ute with four doors.

Volkswagen promises the T-Roc’s production version will be unveiled “soon,” which means it could arrive as early as this summer. If VW chooses to hold off until an auto show, we’ll have to wait with bated breath until the season kicks off with the Frankfurt Motor Show in September.