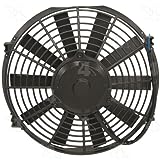 We’ve heard plenty from futurists, urbanists, techies, and environmentalists about the promise and perils of self-driving vehicles. But what about the folks in the trenches, the ones who will have to accommodate and manage those vehicles? What do people who plan and run urban transportation systems think?

Turns out they have a lot to say on the subject.

It’s fascinating and fairly short, worth reading in full. A few things jumped out at me.

Full automation is the only answer

Today vehicles are becoming incrementally more and more autonomous — they can stay between lanes, maintain safe distance from cars ahead, park themselves, even un-park themselves.

They are moving up through levels of autonomy, as defined by the National Highway Traffic Safety Administration:

Now (as I have written before) they are approaching a thorny dilemma. Human drivers are already crap at paying attention, even when they’re always needed. So how are we going to get them to pay attention when they’re only needed 75 percent of the time, or 25 percent, or 5 percent?

Anyone who has witnessed the behavior of human drivers knows it’s untenable. NACTO wants to keep such cars out of cities entirely:

Regulators and product designers should bar the use of partially automated vehicles (NHTSA Level 3) on any roadway without controlled access, like city streets. Such vehicles have been shown to encourage unsafe driving behavior, with drivers reading more, texting more, and generally being inattentive, while still operating under the expectation that the driver will take over if the vehicle encounters a dangerous situation.

More broadly, most of the problems facing autonomous vehicles, and the vast number of accidents they’re involved in, trace back to the continuing role played by unpredictable humans, either behind the wheel or piloting other vehicles. So NACTO wants humans taken out of the picture; it supports full automation, as soon as possible.

More than that, it wants those self-driving vehicles to be communally owned, part of shared fleets that offer mobility as a service to cities. It says that product designers, automakers, regulators, and city planners should “incentivize shared, automated, electric vehicles” (SAEVs).

NACTO envisions SAEVs that do not exceed 25 mph in an urban setting, moving slowly through spaces where they will mix more freely with bikes and pedestrians.

SAEVs won’t just change transportation. They will reshape cities and the way people relate to them.

“Theories of automation that focus simply on fitting more vehicles into an expressway lane every hour are beginning from the product of the economy rather than the motor of the economy,” NACTO warns. “Great cities generate traffic; traffic does not generate great cities.”

So focus on making great cities. That means making transportation and land use decisions with SAEVs in mind.

It means taking into account the decreased travel times that SAEVs will enable, which will in turn reduce demand for new roads; improving existing roads will take priority.

It means taking into account the radically reduced parking needs of a fleet of self-driving (and self-charging) vehicles, using the freed-up land to make cities more livable.

It means rethinking road design, taking advantage of the safety SAEVs offer to “rebalance the use of the right-of-way, with less space for cars and more space for people walking, cycling, using transit, and recreating.”

It means using SAEVs to serve rather than supplant public transit, “by providing first and last mile connections to major transit lines via shared, automated vehicles, and by providing cost-effective, on-demand transit in lieu of low-performing fixed routes.”

And it means involving city officials in the technological and regulatory planning process from the very beginning, so urban needs can guide development.

Data collection from traffic operation and accidents must be updated and better shared.

Traffic management “will remain a function managed or regulated by the public sector even in a future dominated by private mobility providers,” NACTO says. It recommends a “regulated utility model framework” — transportation planners would be charged with “reducing aggregate social and environmental costs and inequities.”

For that to happen, data gathered by SAEVs must be shared in an open platform, accessible to city planners and private entrepreneurs trying to solve the remaining challenges and improve performance.

SAEVs could enable a quantum leap in the intelligence and livability of land use and transportation systems, but only if they are linked, only if they communicate and share data. Those data standards and protocols should be established early.

Self-driving cars are what we make them

There’s been a lot of debate and angst lately about the effect self-driving cars will have on cities and transportation systems. Will they enable more sprawl? Clog the streets even further?

But as the NACTO principles remind us, we are not passive bystanders in this process. Policy will guide how these vehicles and systems develop. Policy can be shaped by engaged citizens.

The urban working class needs affordable housing, and it needs safe, accessible, reliable transportation, to maximize access to jobs. SAEVs could play a role in both. They could extend reliable mobility to populations that now lack it — not only low-income urban workers but the elderly, the disabled, and the very young. Mobility will unlock more of their productive potential and enhance their social connections.

Democrats, who increasingly represent urban demographics, need to put together a coherent agenda around this stuff — around smart, green, dense, livable cities, served by SAEVs. It’s a politically potent vision, if someone can figure out how to organize around it.