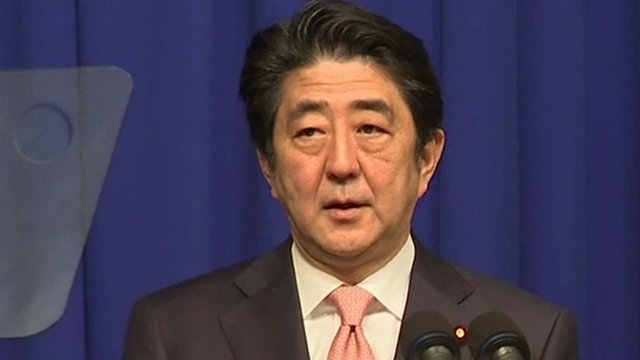 A video purportedly from the group shows a militant threatening to kill two hostages unless a ransom is paid.

In the video, which has not been independently verified, the militant also criticises Japan for pledging aid to countries fighting IS.

Mr Abe said the threat was unacceptable and vowed to save the hostages.

He added that their lives were his “top priority” and that Japan would not give in to terrorism.

Japan’s foreign ministry said it was working to verify the video.

The video named the two men as Kenji Goto, a well-known freelance journalist, and Haruna Yukawa, who reportedly went to Syria to set up a private military contracting company.

Mr Abe is currently in Jerusalem as part of a six-day tour of the Middle East.

However, he is expected to cancel the remainder of his trip and return to Japan to deal with the hostage crisis.

In a press conference in Jerusalem, Mr Abe said he was “indignant” and felt “strong resentment” at the threats, and demanded the immediate release of the hostages.

“Extremism and Islam are completely different things,” he said, adding: “The international community will not give in to any form of terrorism and we have to make sure that we work together.” 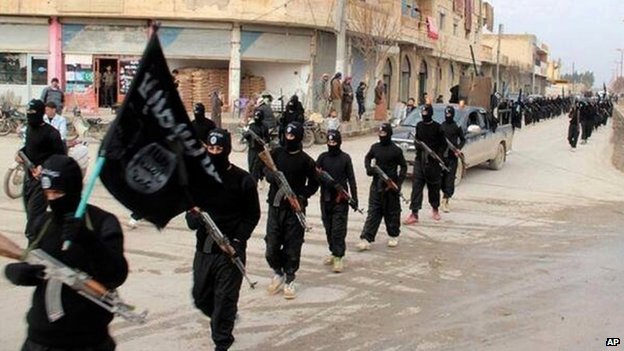 Mr Abe added that Japan’s pledges of non-military support to countries in the Middle East would continue.

Officials said that much of the $200m fund would be focused on helping refugees displaced from Syria and Iraq.

As he announced the aid, Mr Abe argued that the world would suffer “immeasurable” damage if terrorism spread in the region.

Japan relies on the Middle East for much of its crude oil imports.

Mr Abe has been pushing to give Japan a much more active role in international affairs, but many in Japan oppose that, and will claim this is exactly the result they feared, our correspondent adds.

The apparent IS video shows a masked man holding a knife and threatening two hostages.

Speaking in English, the militant says he will kill the two men unless a $200m ransom is paid within 72 hours. 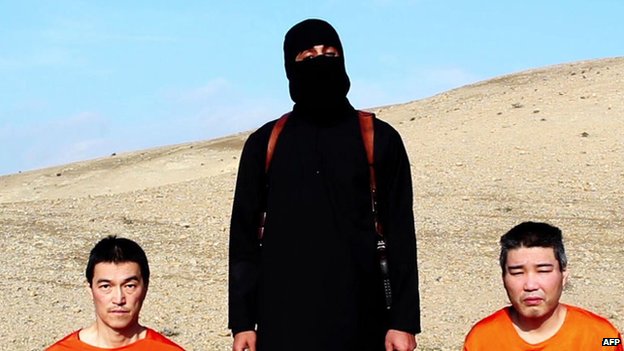 The purported IS video shows a masked man with two hostages

Hostages have become a key propaganda tool for Islamic State.

The militant group has seized large swathes of territory in eastern Syria and across northern and western Iraq.

Its brutal tactics – including mass killings and the beheadings of soldiers, journalists and other captives – have sparked international outrage and prompted military intervention by a US-led coalition.

Speaking earlier to journalists, Japan’s top government spokesman Yoshihide Suga said: “If true, the act of threat in exchange of people’s lives is unforgivable and we feel strong indignation.

“We will make our utmost effort to win their release as soon as possible.”

Yasuhide Nakayama, a deputy foreign minister, will fly to Jordan as part of efforts to resolve the crisis.

Who are Islamic State (IS)?