(CNN)Jordan on Wednesday indicated it is willing to release a longtime prisoner if ISIS releases one of its pilots — one of the latest developments surrounding the terror group’s apparent threat to kill the pilot and a Japanese hostage.

The announcement comes as an apparent ISIS deadline looms: A video file posted online Tuesday said that ISIS would kill al-Kassasbeh and Japanese hostage Kenji Goto within 24 hours if Jordan did not release al-Rishawi, an Iraqi woman who has been imprisoned in Jordan since 2005.

It wasn’t immediately clear if ISIS would accept Jordan’s offer. In two videos since last week, the terror group appeared to offer Goto’s freedom in exchange for al-Rishawi’s. It did not offer al-Kassasbeh’s freedom, but indicated in one instance that he and Goto would be killed if al-Rishawi were not freed.

With the fates of their children hanging in the balance, the families of Goto and al-Kassasbeh called on their governments Wednesday to do everything they can to save the hostages before time runs out.

Tuesday’s apparent ISIS video file showed a static image of Goto holding a picture that appears to be al-Kassasbeh, the pilot captured by ISIS last month after his jet crashed in Syria. 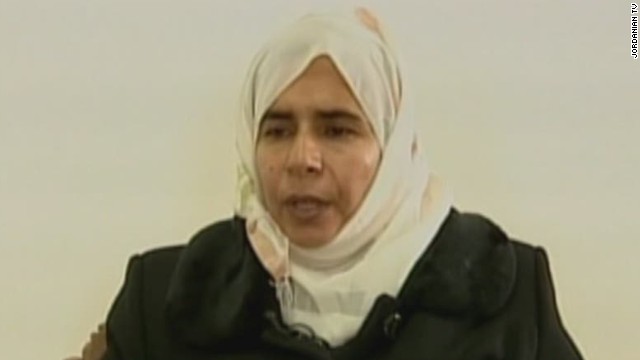 With the image, a voice purporting to be that of Goto repeats an earlier proposal that he will go free if Jordan releases al-Rishawi, who is on death row in Jordan for her role in deadly bombings in 2005.

But the latest message says the lives of both Goto and al-Kassasbeh are at stake if the swap doesn’t taken place before the deadline.

CNN couldn’t independently verify the authenticity of Tuesday’s message, which was posted to YouTube and distributed on social media by known ISIS supporters. The Japanese government said there was no evidence so far that it wasn’t Goto speaking in the video.

“Please save the life of Kenji,” Junko Ishido said. “I call on you to work with all your strength in negotiations with the Jordanian government, until the very end.”

Al-Kassasbeh’s father has called on Jordanian authorities to act, as well.

“I firmly ask whomever has sent Moaz to fight outside the borders of Jordan, on a mission unrelated to us, to make strong efforts to bring back Moaz,” Safi al-Kassasbeh said Tuesday.

“Moaz’s blood is precious, it’s precious and it represents the blood of all Jordanians,” he said.

It’s unclear exactly what steps Jordanian and Japanese officials are taking to free their citizens.

Abe on Wednesday called the latest message about Goto “despicable” and said Japan is requesting Jordan’s cooperation to secure his release.

Bassam al-Manaseer, chairman of the foreign affairs committee in the lower house of the Jordanian parliament, said Tuesday that Jordan is in indirect negotiations with ISIS to secure the release of Goto and al-Kassasbeh, Bloomberg News reported.

The talks are happening through religious and tribal leaders in Iraq, al-Manaseer told Bloomberg.

Japanese Deputy Foreign Minister Yasuhide Nakayama said Wednesday in Amman, the Jordanian capital, that he had no new information to report on the situation.

He declined to comment on the possibility of a prisoner swap, saying that officials were doing their best to try to bring Goto back alive.

“This is what we will work for persistently, and we will never give up,” he said.

Jordan is part of the U.S.-led coalition that is carrying out airstrikes against ISIS targets. Japan isn’t involved in military action but has pledged $200 million in humanitarian aid to countries affected by ISIS.

The militant group, which holds large areas of Iraq and Syria under its brutal rule, has a grim track record of ruthlessly killing hostages. Last year, it publicized its series of beheadings of three American and two British captives. 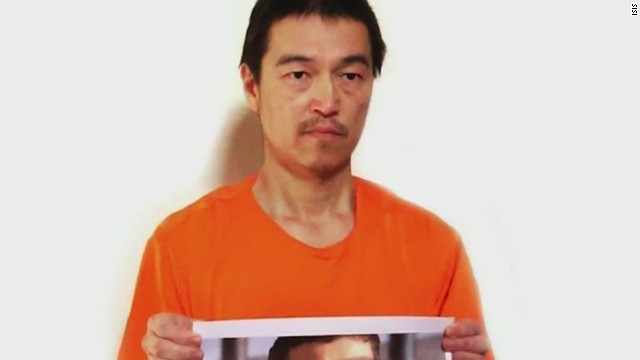 In a video file posted Saturday that’s believed to be from ISIS, Goto was shown holding a picture of what appeared to be the corpse of Haruna Yukawa, the other Japanese man ISIS was holding.

In the Saturday post, a voice thought to be Goto’s first set out the idea of exchanging him for al-Rishawi, but no clear deadline was mentioned.

An ISIS-affiliated Internet radio station also reported the killing of Yukawa and the proposed prisoner swap.

‘This is my last message’

The new post on Tuesday announced that time was suddenly in short supply for Goto and the Jordanian pilot. The Japanese hostage is shown handcuffed and dressed in orange.

“I’ve been told this is my last message, and I’ve also been told that the barrier obstructing my freedom is now just the Jordanian government delaying the handover of Sajida,” the voice says. “Tell the Japanese government to put all the political pressure on Jordan.”

“Her for me — a straight exchange,” the voice says, referring to al-Rishawi. “Any more delays by the Jordanian government will mean they are responsible for the death of their pilot, which will then be followed by mine.”

But the pilot’s father suggested his son’s case shouldn’t be mixed up with Goto’s.

Goto, an experienced war journalist, is believed to have entered ISIS-controlled territory in October to try to help Yukawa, who was reported to have been captured in August.

The two Japanese men are believed to have become friends after meeting in Syria earlier in 2014.

Yukawa, 42, has been described as a lost soul who went to the war-torn Middle Eastern country with dreams of building a private security business. He had previously suffered a series of setbacks, including the death of his wife and the loss of his home.

Goto, 47, is reported to have three children, two of them with his current wife.

ISIS says it captured al-Kassasbeh, the Jordanian pilot, after he ejected from his F-16 jet last month near Raqqa, the militant group’s de facto capital in Syria.