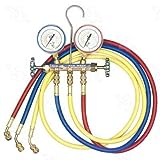 Tech companies and automakers are betting big on self-driving cars — investing in a dream of automated efficiency and safety.

But that dream faces a new threat: lasers.

Using lasers, a security researcher has discovered a way to trick self-driving cars into believing in things that aren’t there, the Guardian reported.

That doesn’t mean shining a laser pointer at a self-driving vehicle will make it shut down. But a laser system built with about $60 worth of off-the-shelf parts could be used to confuse the technology that self-driving cars use to detect obstacles, including bikers, buildings and other cars, according to a paper to be presented this fall at Black Hat Europe by researcher Jonathan Petit of Security Innovation, a cybersecurity firm.

Self-driving vehicles typically use a system known as Lidar to detect potential roadblocks. The systems are mounted on top of the cars and use lasers themselves, spinning in all directions to form a sort of radar that tells the car what’s nearby.

But sending false data to the system could confuse it, according to the researchers.

“If a self-driving car has poor inputs, it will make poor driving decisions,” Petit, a former research fellow in University College Cork’s Computer Security Group, told technology news outlet IEEE Spectrum. “I can spoof thousands of objects and basically carry out a denial-of-service attack on the tracking system so it’s not able to track real objects,” he said.

Petit tested his spoofing system on one version of the Lidar system that is on the market, but he argues that this type of vulnerability should be a wake-up call to makers of self-driving cars. Security flaws in the increasingly digitally connected vehicles on U.S. roads have made headlines in recent months, as researchers uncovered ways to hack cars and subvert their driving systems — resulting in major recalls. On Friday, Fiat Chrysler recalled nearly 8,000 vehicles over concerns that their media consoles left them vulnerable to wireless hacking.

Many experts say the risks posed by such vulnerabilities will only grow as self-driving tech takes more and more control out of drivers’ hands. Highway-worthy automated driving tech is still a work in progress — and even fixed-gear bikes appear to have confused some prototype vehicles.

But lasers, even a simple pointer, have long been considered a safety hazard for other forms of transportation. For instance, people can’t seem to stop pointing them at planes, which could temporarily blind pilots, despite ample warnings and legal sanctions.