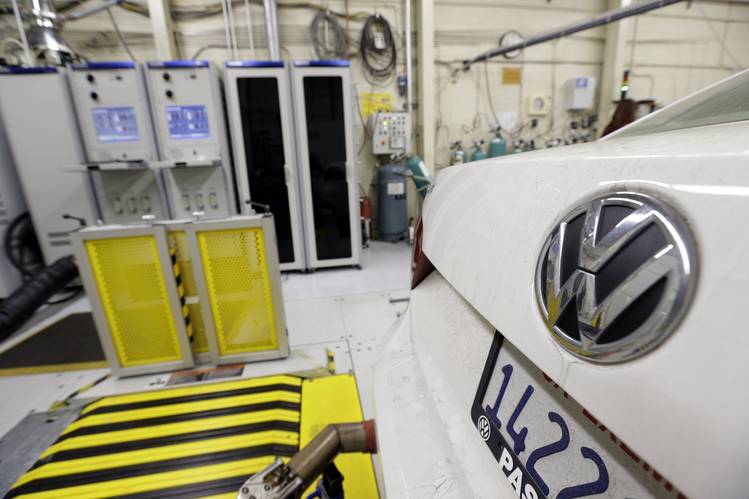 
is a step closer to resolving its emissions-related legal woes in the U.S., but in Europe its troubles may be just beginning.

Volkswagen last week said it was taking a €16.9 billion ($18.85 billion) charge against 2015 earnings, pushing the company to a record loss.

The lion’s share of the provision is to pay for all known costs associated with its emissions-cheating scandal, including a landmark deal in principle to give U.S. customers the option of selling their car back to Volkswagen or having it fixed.

“We haven’t reached the finish line, but we have paved the way to resolve our legal issues in the U.S.,” Volkswagen Chief Executive Matthias Müller, told employees in a letter sent to staff on Friday that was seen by The Wall Street Journal.

Not included in that accounting are potential costs from lawsuits in Europe. Volkswagen thus far is offering no compensation to car owners other than pledging to repair the vehicles.

Michael Hausfeld, a renowned class-action attorney in the U.S., launched a website on Sunday to sign up Volkswagen’s disgruntled European customers, investors and other parties damaged when U.S. authorities disclosed in September that the car maker rigged diesel engines to cheat on emissions tests.

Once registered with the law firm, plaintiffs could become part of a civil suit in Germany in an effort to win the same compensation for around 8.5 million Volkswagen customers in Europe as the nearly 500,000 customers in the U.S. affected by the scandal.

“Europeans are not second-class customers,” said Christopher Rother, a partner and director of Hausfeld’s Berlin office.

Mr. Müller on Friday said he couldn’t comment on any potential costs beyond what the company has calculated for 2015.

The car maker has argued in German courts, however, that it doesn’t believe the software changes to its diesel engines—considered an illegal defeat device in the U.S.—were illegal in Europe.

So far, no consumer lawsuits have been permitted to move forward in a European courtroom, but regulators and politicians from Brussels to Berlin are angry that Volkswagen is still resisting compensation for European customers.

“We have just seen that consumer rights, and the environment by the way, are being protected better and more efficiently in the U.S. than in Germany,” Jürgen Trittin, a former German environment minister, said after the U.S. deal was announced.

The British government also complained after Volkswagen announced its plan to compensate U.S. customers but was silent about customers in Europe.

“We expect VW to take every step necessary to protect its U.K. customers and address their concerns, and have sought assurances that VW are taking the necessary remedial action, including vehicle fixes and compensation where appropriate,” a spokeperson for the U.K. Department of Transportation said.

Volkswagen has presented a plan to the German motor vehicle agency, or KBA, for a technical fix for diesel-powered cars in Europe. But the Flensburg, Germany-based KBA hasn’t approved the fix because it appears to cause fuel consumption to worsen.