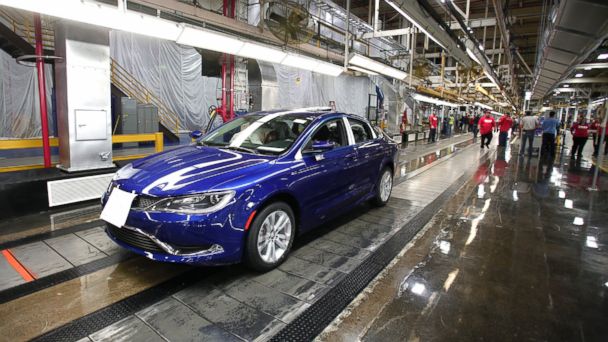 Consumer confidence is coming back and this month is expected to be the strongest May for auto sales since the recession began in 2007. According to Kelley Blue Book, Nissan and Chrysler are leading the sales surge with growth of more 12 percent compared to last year. “Both Nissan’s Rogue and Juke are benefitting from increasing popularity in small crossover vehicles, with their combined sales up 47 percent this year,” says Kelley. When the final numbers are in total U.S. auto sales in May are expected to rise nearly 7 percent. “Shoppers have been able to offset rising prices with low-interest financing and affordable lease options for even those with less-than-perfect credit,” says senior auto analyst Alec Gutierrez.

Several stronger-than-expected economic reports were a boost for Wall Street. The S&P 500 – the benchmark for many stock mutual funds – rose for the fourth straight day Tuesday, and ended at another high. International stock markets mostly rose today on upbeat data that reinforced confidence in the U.S. economic recovery. July crude oil futures are above $104 a barrel.

The Federal Trade Commission wants Congress to tighten up rules for data brokers and help consumers control the vast amounts of personal information about them that’s being collected. FTC Chairwoman Edith Ramirez says the amount of information being collected on consumers is “quite astonishing.” She says the FTC wants Congress to require more transparency from data brokers, to have them “open up and shed light on what they are doing.” She says the agency also wants consumers to have more control over how their personal information is used.

Retailers would have to notify customers of data breaches under a bill that passed California’s State Assembly. A recent report by the California attorney general’s office found 20 million Californians had information exposed in breaches during the last two years.

Google is building a car without a steering wheel. Sergey Brin, co-founder of the technology firm, told a tech conference that Google will make 100 prototype cars that drive themselves — and therefore do not need a wheel, brake and gas pedals. Instead, there are buttons for go and stop. A combination of sensors and computing power takes the driving from there. This prototype is the first Google will have built for itself.