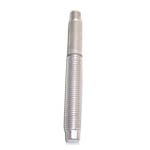 No Bombs Found on 2 Airplanes After Threats – NBCNews.com

No bombs were found on two airplanes forced to land in Atlanta after online threats prompted a security scare Saturday. Hartsfield-Jackson Atlanta International Airport announced the all-clear at 3:20 p.m., about 90 minutes after the jets landed there.

NORAD fighter jets escorted the two commercial planes to the airport, an airport spokesman said. The airlines received the bomb threats via Twitter.

Both Delta Flight 1156, arriving from Portland, Oregon, and Southwest Flight 2492, from Milwaukee, landed safely at the airport at 1:45 p.m. ET, airport spokesman Reese McCranie said in a statement. The planes were evacuated and are being inspected by bomb squads and canine units.

Atlanta FBI Special Agent Stephen Emmett said the flights were “safely on the ground” and explosive units were on the scene at the airport, continuing to sweep the aircraft and debrief the passengers.