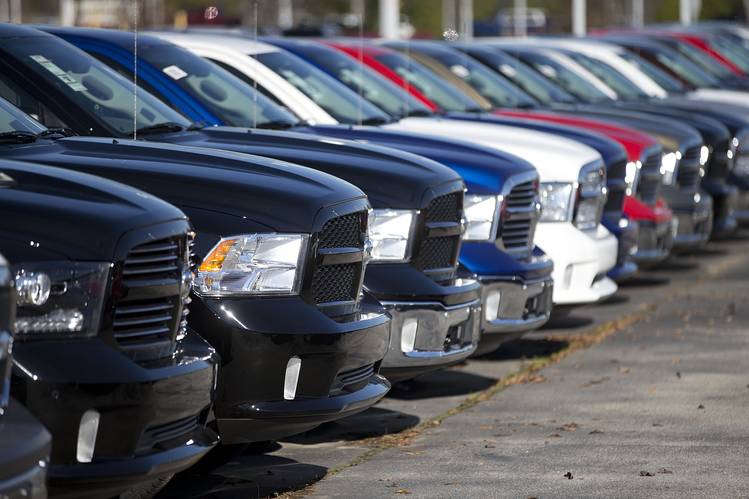 U.S. new-car sales in November continued to run at a blistering pace, putting the auto industry on track to challenge the 17.35 million sales peak reached in 2000.

A spate of Black Friday deals coupled with cheap gasoline and low financing costs helped auto makers overall deliver a 1.4% increase over the same month last year, offsetting what historically is a sluggish sales month. The tally brings the industry this year to 15.82 million vehicles through November.

The results continued an annual sales pace that is tracking to be among the best in U.S. history, and raised industry optimism for a new annual record, barring a string of bad weather or other unexpected woes. Ford Motor Co.
F


said on Tuesday it would spend $1.3 billion, about a fifth of its typical annual capital-expenditure budget, to upgrade a pickup truck plant in Kentucky.

“There is a lot of inventory and auto makers are going to come out with guns blazing,” said Ernie Boch Jr., chief executive of Boch Automotive, a Norwood, Mass., dealership. “Right now, I don’t see any signs of [demand] letting up.”

With gasoline prices nationwide hovering around $2 a gallon, sales of the heavier vehicles that deliver substantially higher profits to auto makers are driving the industry. Nearly 59% of November’s volume was classified as light trucks, according to researcher Autodata Corp., including smaller SUVs.

These light trucks represented three out of every four vehicles sold by Detroit auto makers last month, representing nearly the highest mix of pickup and SUV deliveries as a percentage of sales in history. More than 80% of Fiat Chrysler Automobiles
FCAU 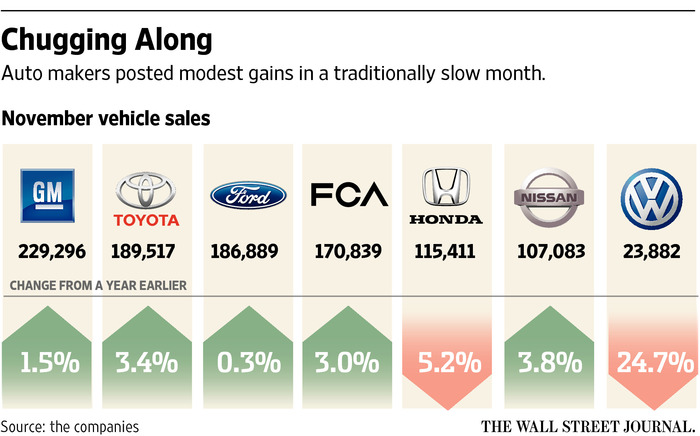 The trend is leading to production cutbacks at small car plants and accelerating a shift of small-car production to lower-wage countries including Mexico. However, it is lifting average transaction prices, allowing car makers and dealers to offer hefty discounts and cut-rate financing.

Ford’s newer trucks and SUVs helped lift its average transaction price to a $36,000, up 11% compared with a year ago and nearly $4,000 higher than the U.S. industry average, the company said. General Motors Co.
GM

“The taller these cars get, the more money the Detroit auto makers’ make,” said Mark Wakefield, head of consulting firm AlixPartners LLP’s automotive practice. “Only a few years ago regulators thought sales would be a 60-40 split in favor of cars and now we are seeing a reverse of that.”

Because more buyers opt for crossovers, which are more efficient than the hulking SUVs that once dominated the segment, average fuel economy of vehicles sold isn’t deteriorating as rapidly as it would have during another era.

IHS Automotive Analyst Tom Libby said hot sales of crossover SUVs such as the Jeep Cherokee bring higher profit and fuel-economy benefits and because owners tend to be more loyal. By offering smaller, car-based SUVs, auto makers are plugging holes in their lineups.

It isn’t just domestic car makers reaping the benefits of the shift. Half of the sales reported by Japan’s biggest car makers— Toyota Motor Corp.
TM


—were light trucks and SUVs.

‘There is concern that China, which is such a dominant part of global sales is downshifting.’

The trend is lining Detroit’s pockets. GM and Ford posted record operating profits in North America during the third quarter, and the companies said on Tuesday that industry sales are expected to further increase in 2016.

Investors, however, are reluctant to give domestic players much credit. Shares of Ford on Tuesday rose 1.6% to $14.56, down modestly from the start of the year; GM closed up slightly at $36.26 and are nearly flat compared with the beginning of the year.

“Sales and profitability don’t always run in lockstep and investors are worried the auto industry is reaching a peak in terms of profitability,” Mr. Wakefield said. “There is concern that China, which is such a dominant part of global auto sales, is downshifting.”

Industry sales hit 1.3 million vehicles in November, representing the third consecutive month that the seasonally adjusted annual rate of sales topped 18 million vehicles. The record for annual sales of 17.4 million, notched in 2000, could be topped if demand continues to strengthen in December.

Fiat Chrysler posted the strongest sales gain of the Detroit Three with a 3% increase. Jeep brand sales soared 20% with the Cherokee, Compass, Patriot and Wrangler each hitting November sales peaks.

GM’s sales rose 1.5% for the month to 229,296 light vehicles. Ford recorded a less than 1% sales increase. This week, Ford abandoned a no-haggle, insider-pricing offer that failed to catch on with buyers. The Dearborn, Mich., car maker replaced it with a new program offering through Jan. 4 no-interest vehicle financing for 60 months and a $1,000 purchase incentive.

Ford said its results were aided by a 16% increase in its F-series retail sales.


sales plunged 24.7% to 23,882 vehicles in the second full month after its emissions cheating scandal broke.

Toyota logged a 3.4% increase to 189,517 light vehicles, Nissan reported sales for the month increased 3.8%, as sales of crossovers, trucks and SUVs rose 15%, and Honda sales declined 5.2% from a year earlier.

—Anne Steele and Christina Rogers contributed to this article.

Write to Jeff Bennett at jeff.bennett@wsj.com and John D. Stoll at john.stoll@wsj.com