Washington (CNN)President Barack Obama made a feisty pitch for economic populism in his penultimate State of the Union Tuesday night, touting the improving economy on his watch and making the case that government has a role in ensuring equal opportunity for all.

Obama began his speech at 9:10 p.m. in front of a joint session of the House and Senate, declaring that “the shadow of crisis has passed, and the state of the union is strong.”

“At this moment — with a growing economy, shrinking deficits, bustling industry, and booming energy production — we have risen from recession freer to write our own future than any other nation on Earth,” he said.

“It’s now up to us to choose who we want to be over the next fifteen years, and for decades to come,” he said. “Will we accept an economy where only a few of us do spectacularly well? Or will we commit ourselves to an economy that generates rising incomes and chances for everyone who makes the effort?”

Obama argued that a raft of new policy proposals — which include an ambitious plan to raise taxes on wealthy Americans and financial institutions to pay for progressive priorities — favor the middle class, and that “middle-class economics works.”

And he laid down the gauntlet to Republicans: They’ll “continue to work, as long as politics don’t get in the way.”

It’s a defiant speech for the President, now freed from the shackles of vulnerable red-state Democrats up for re-election and looking to burnish his legacy in his final two years.

Instead of granting Republicans their wish for a realistic compromiser-in-chief chastened by a midterm election drubbing, Obama is attempting to set the terms of an economic debate that could continue into the 2016 race to replace him in the Oval Office.

He called for cooperation, reprising the theme that there isn’t a “red America” or “blue America” from the 2004 Democratic National Convention speech that shot Obama into stardom. And he flashed a renewed confidence, going off-script after touting the improving economy to say, “This is good news, people” — and followed it with a wink.

Later, when Obama said he had no campaigns left to run and some Republicans sarcastically clapped, the President shot back: “I know, ’cause I won both of them.” 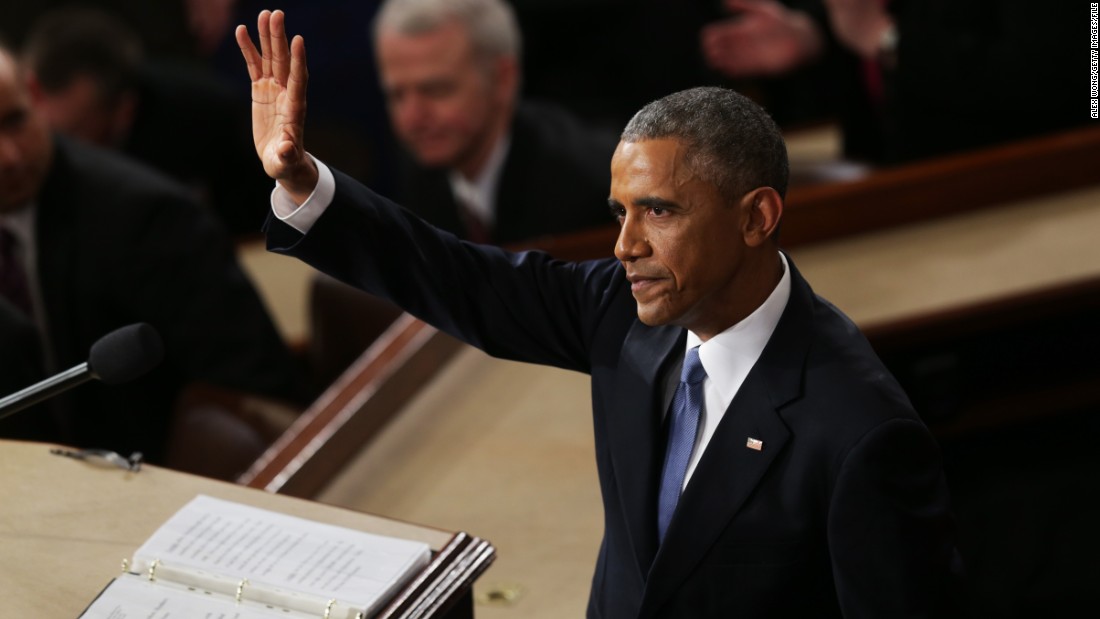 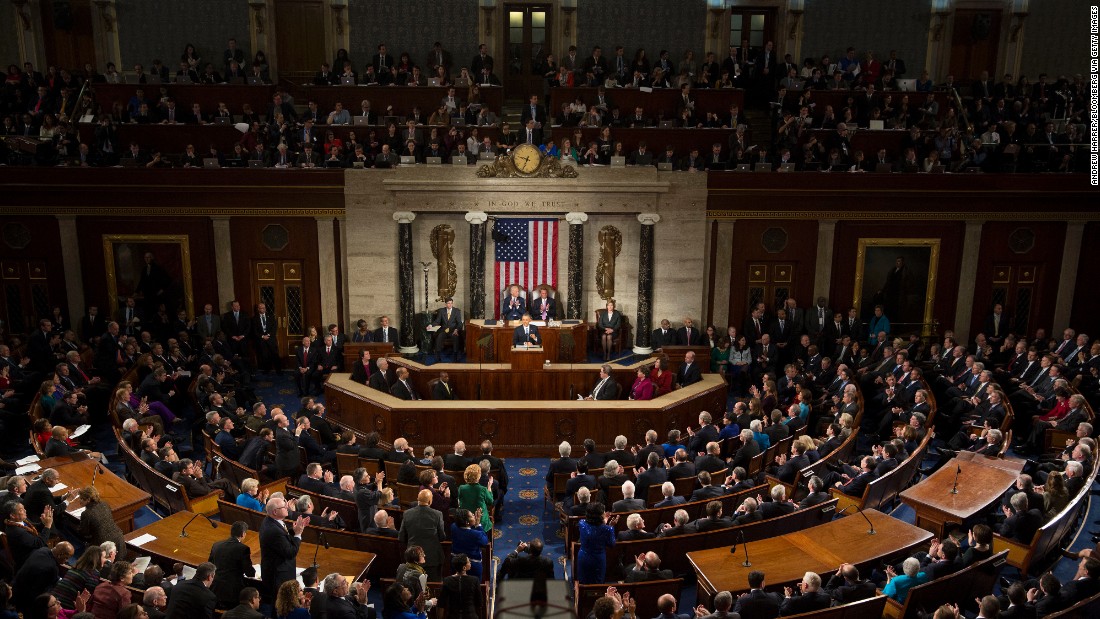 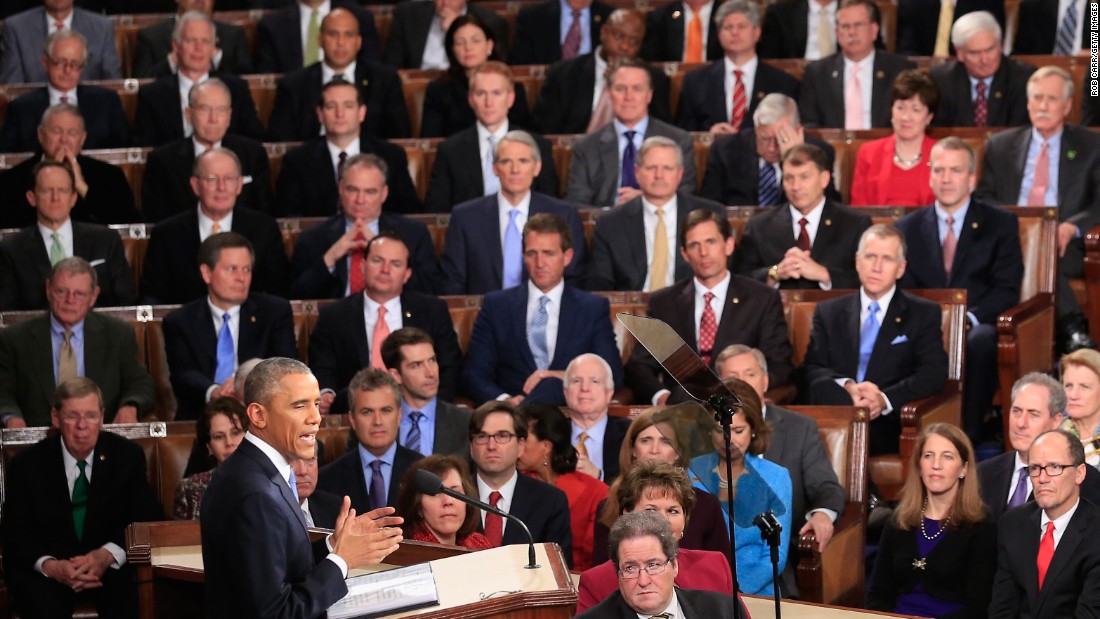 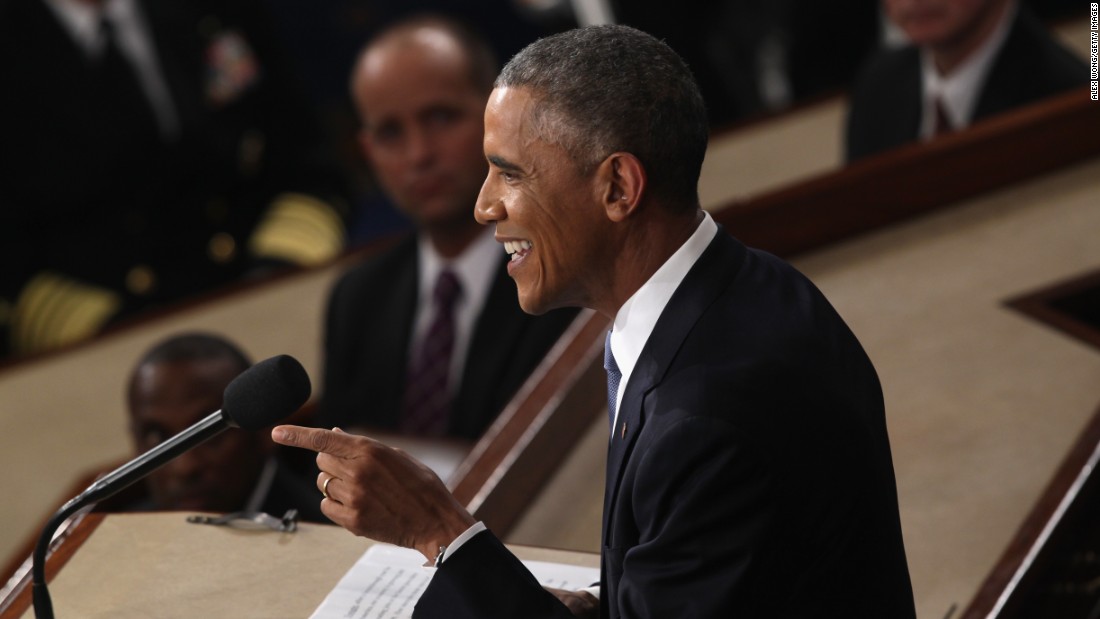 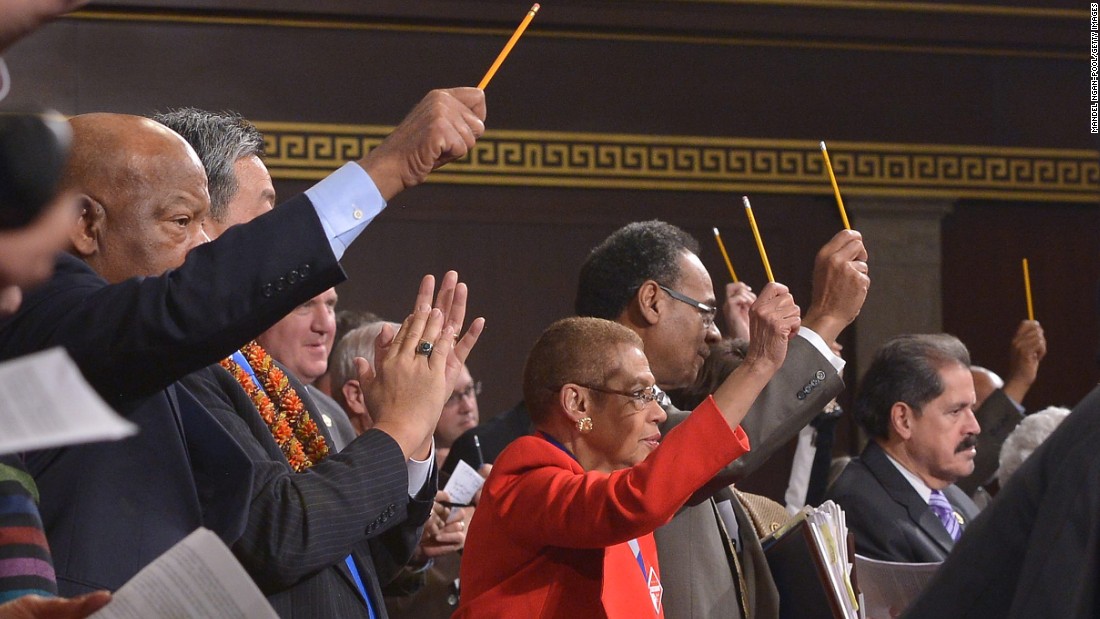 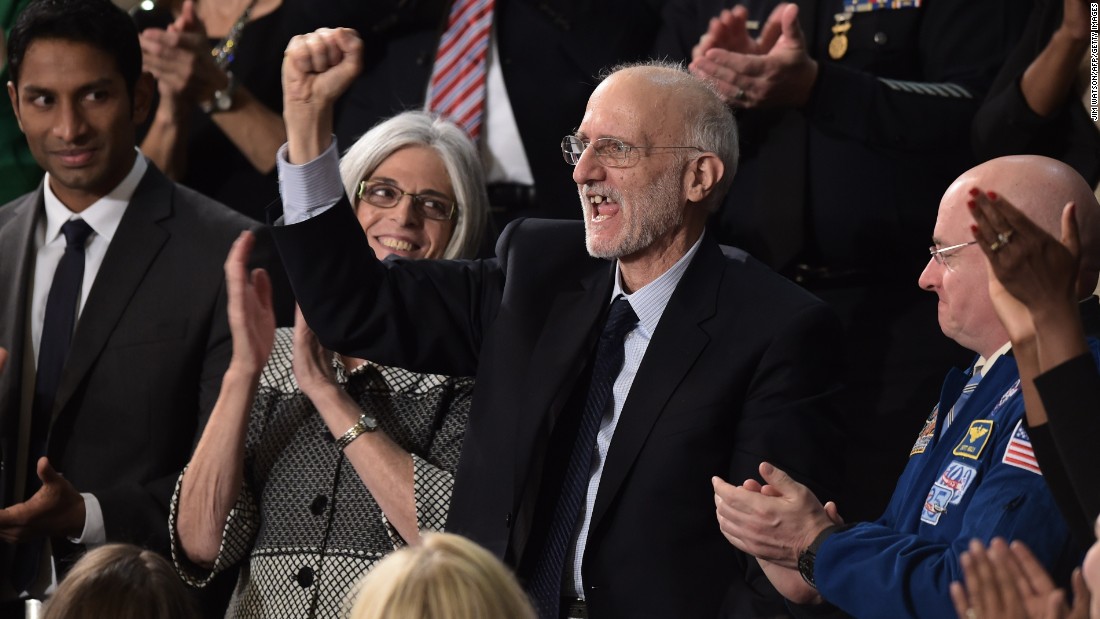 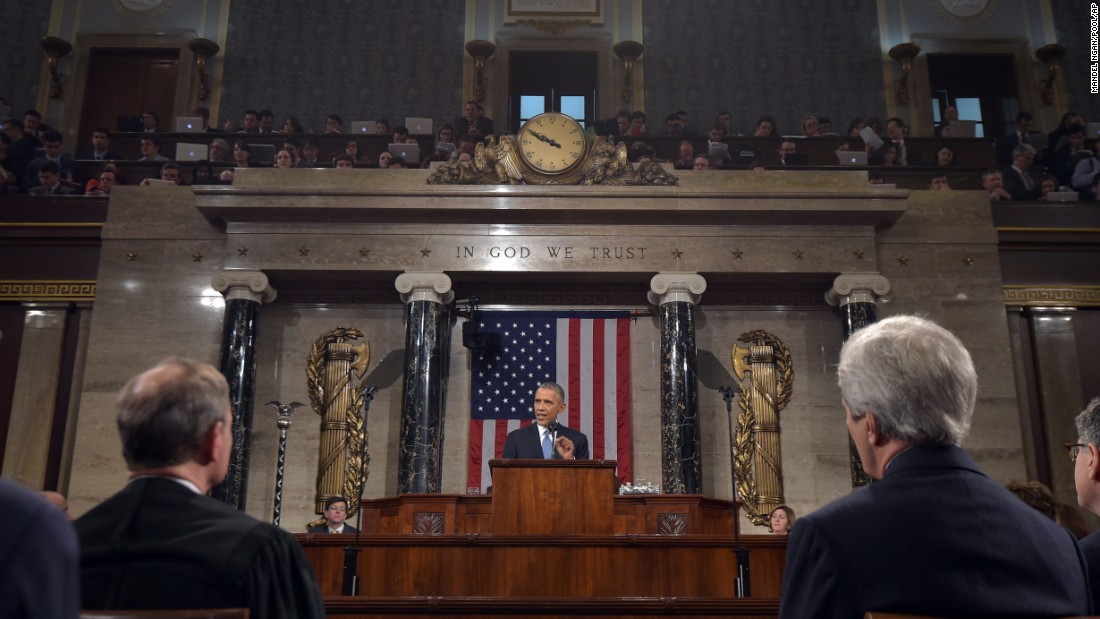 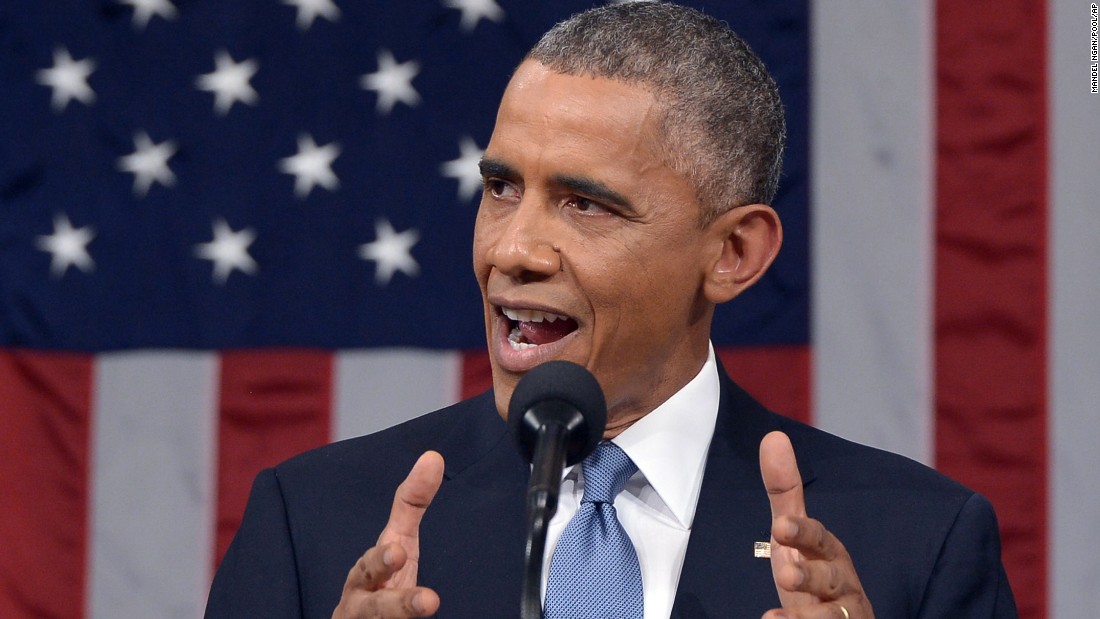 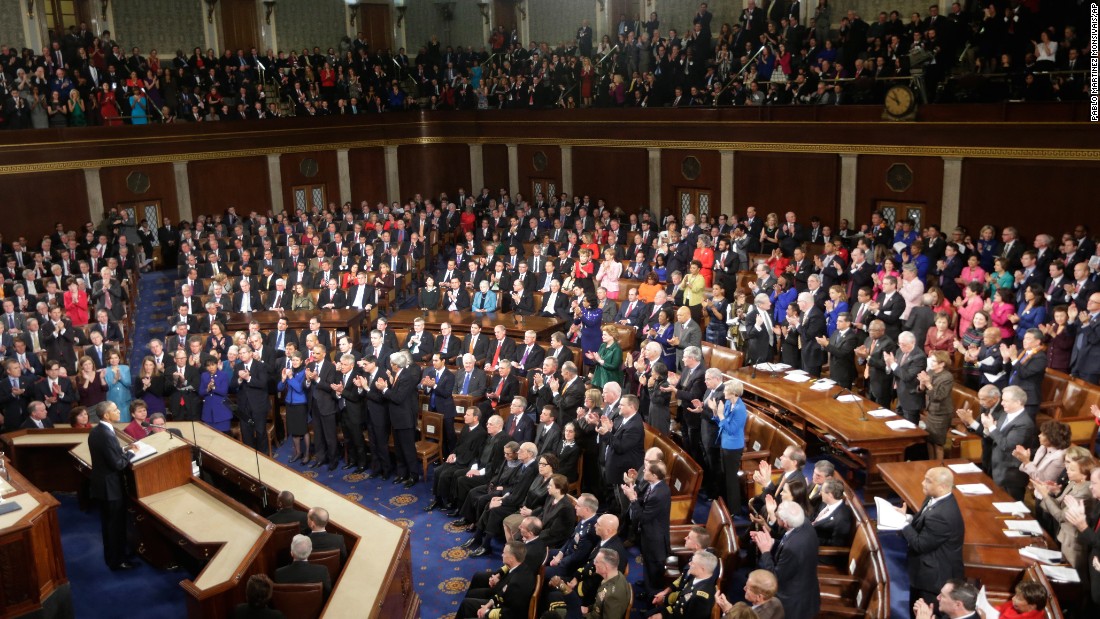 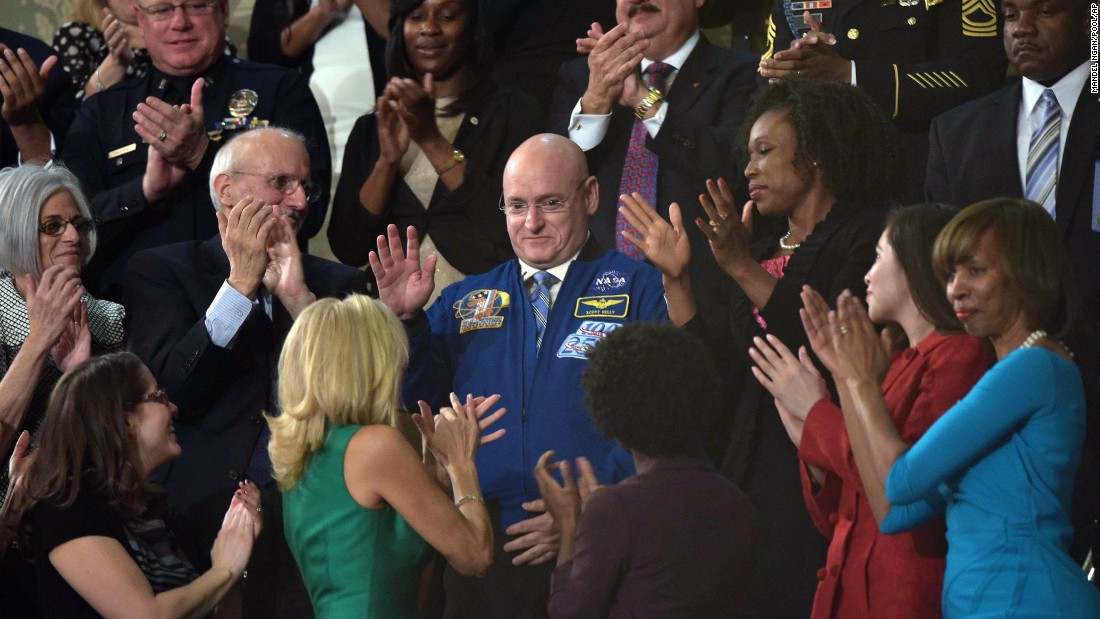 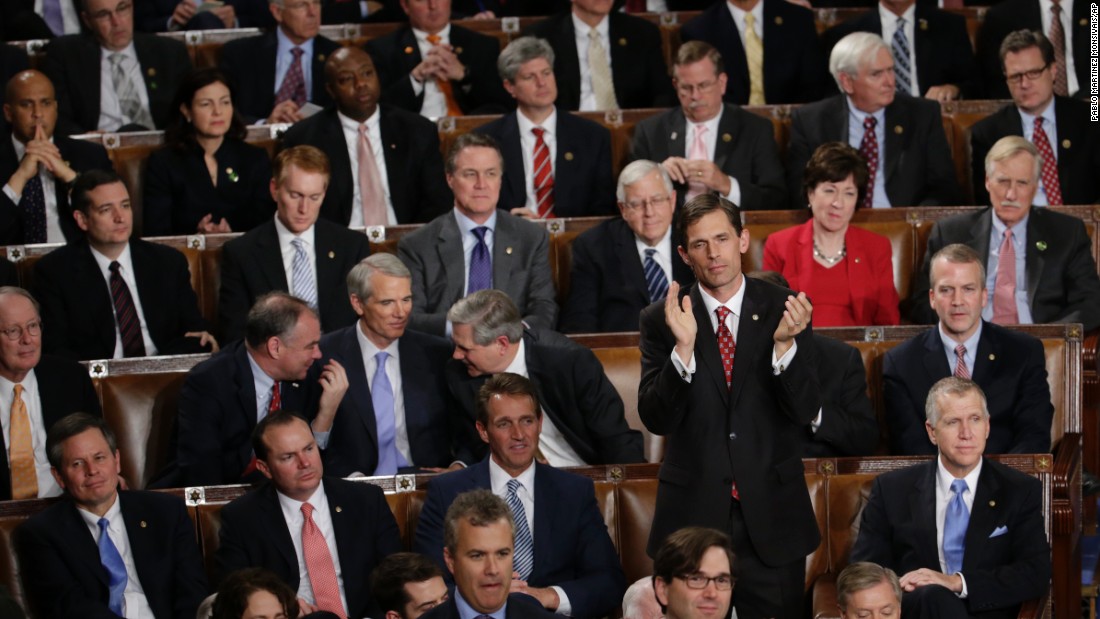 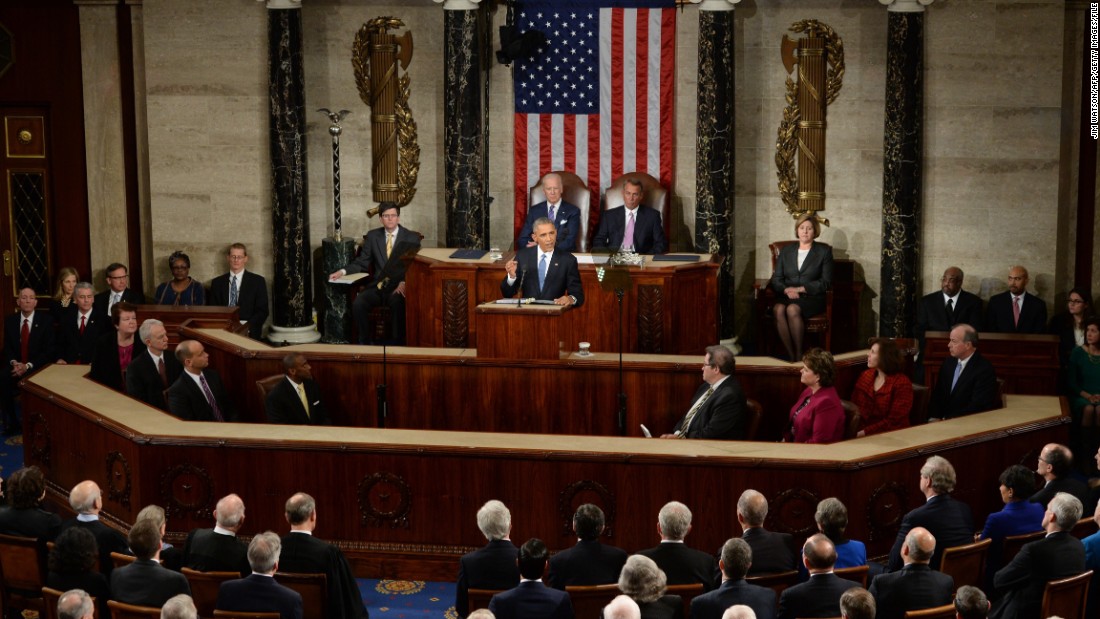 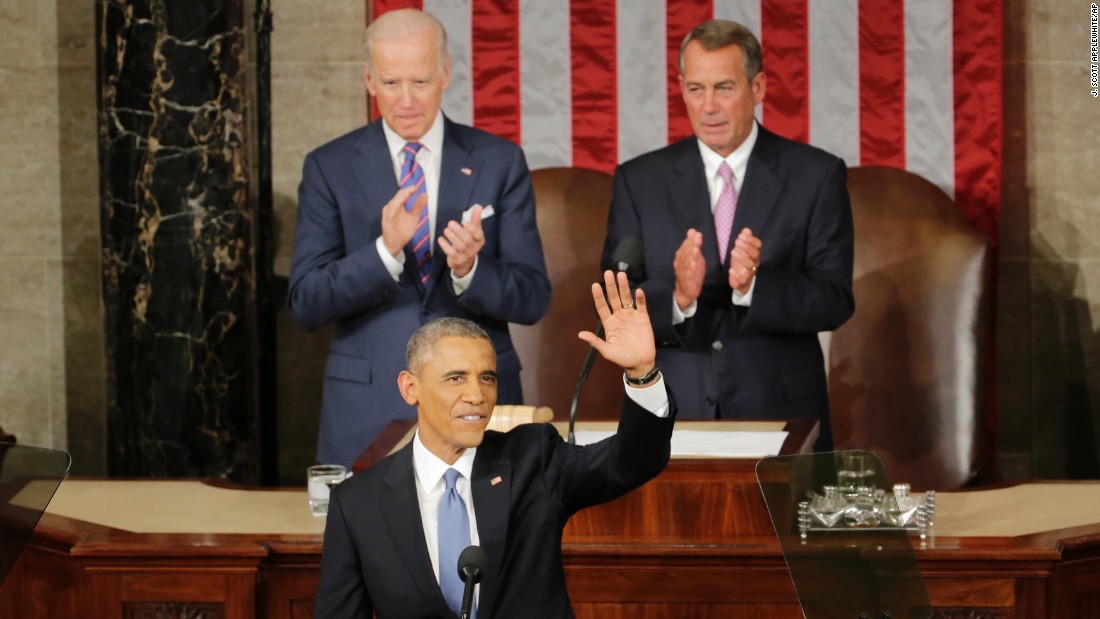 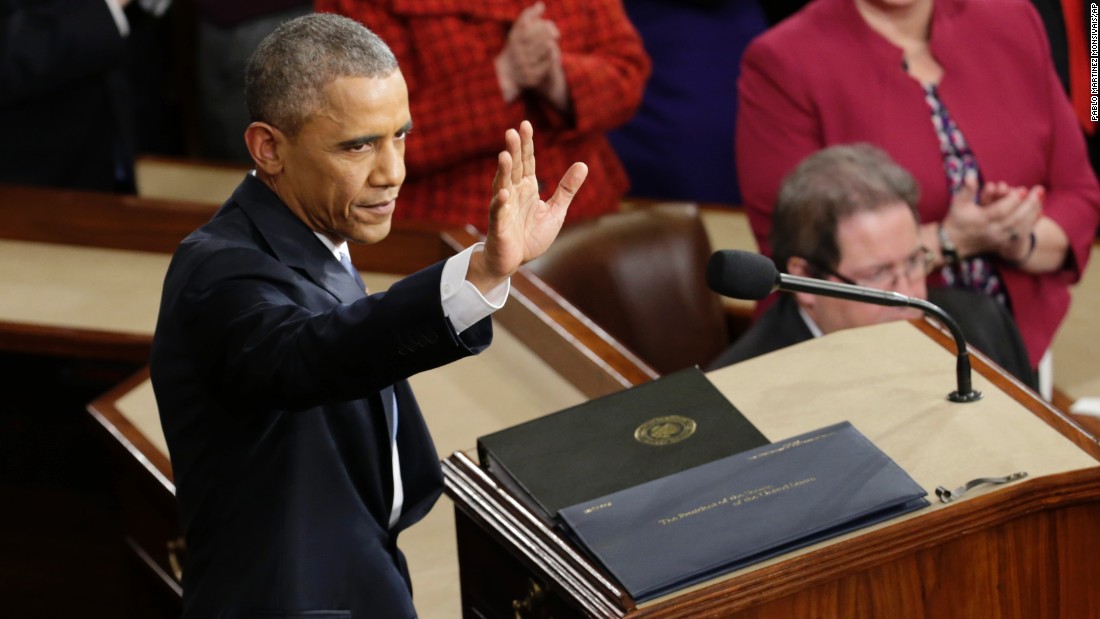 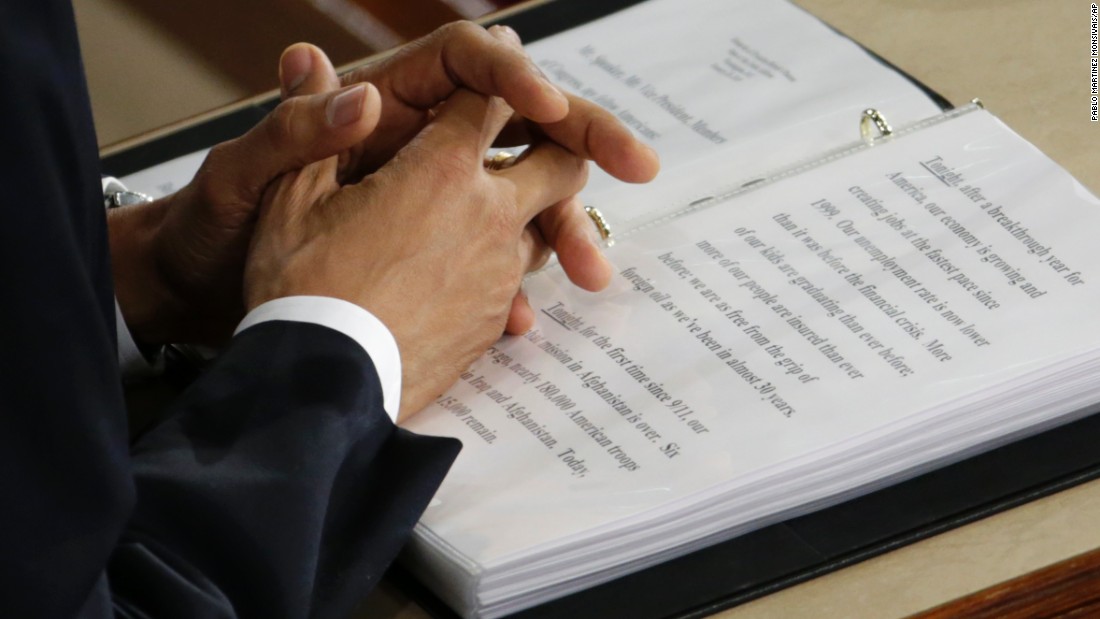 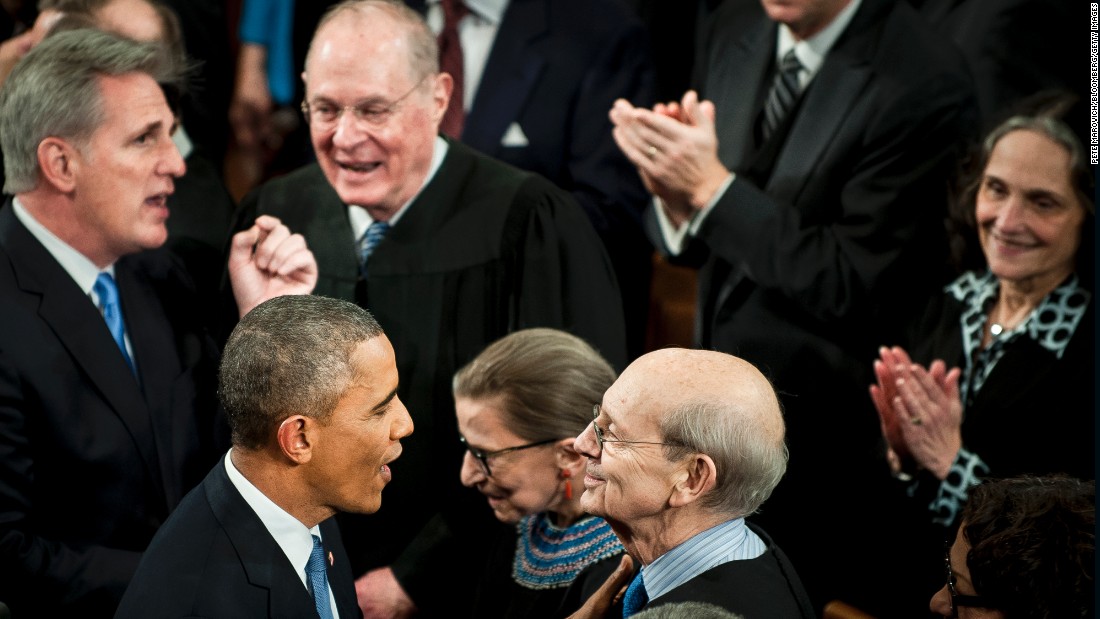 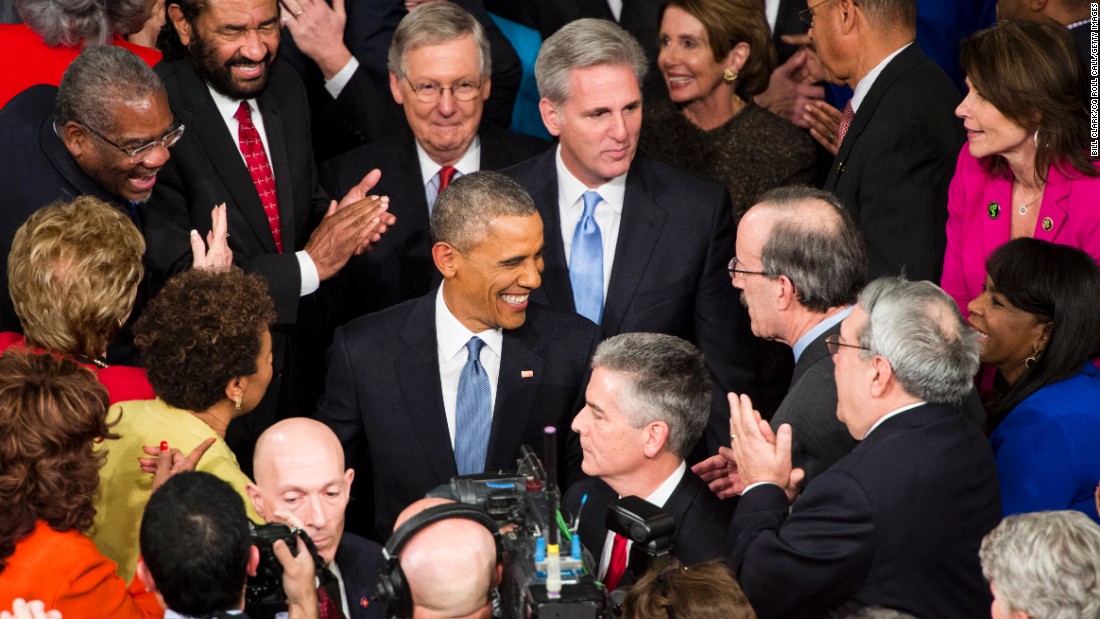 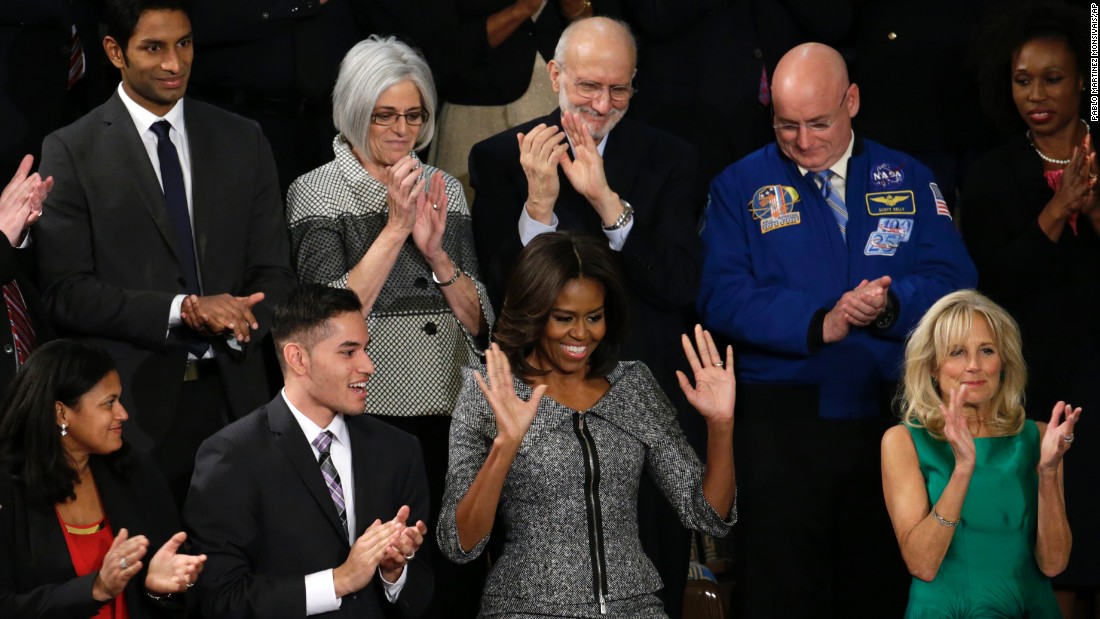 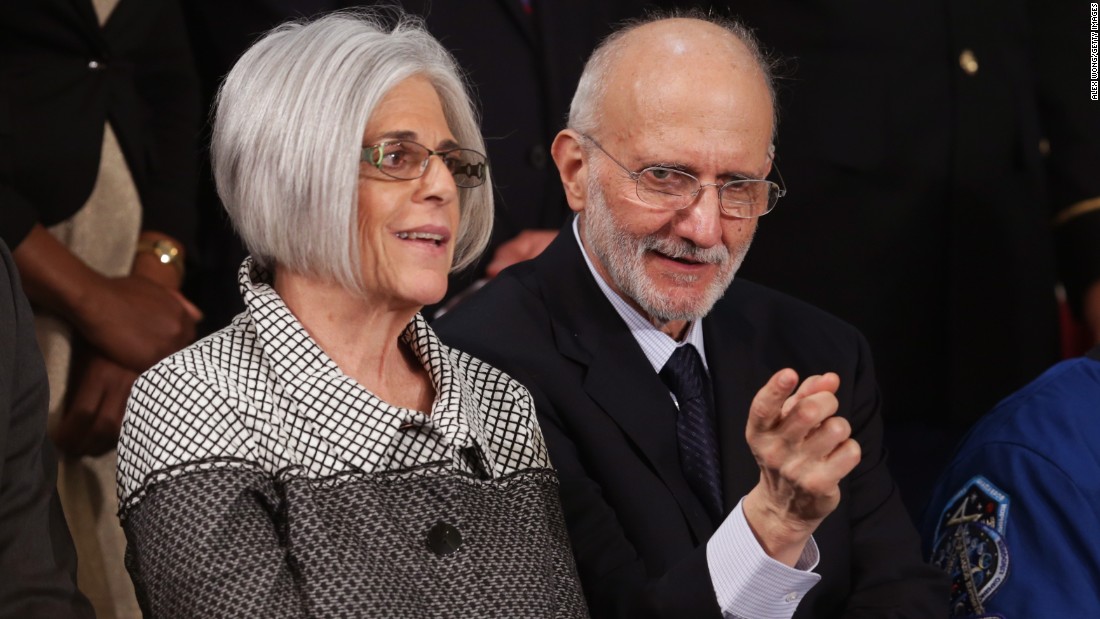 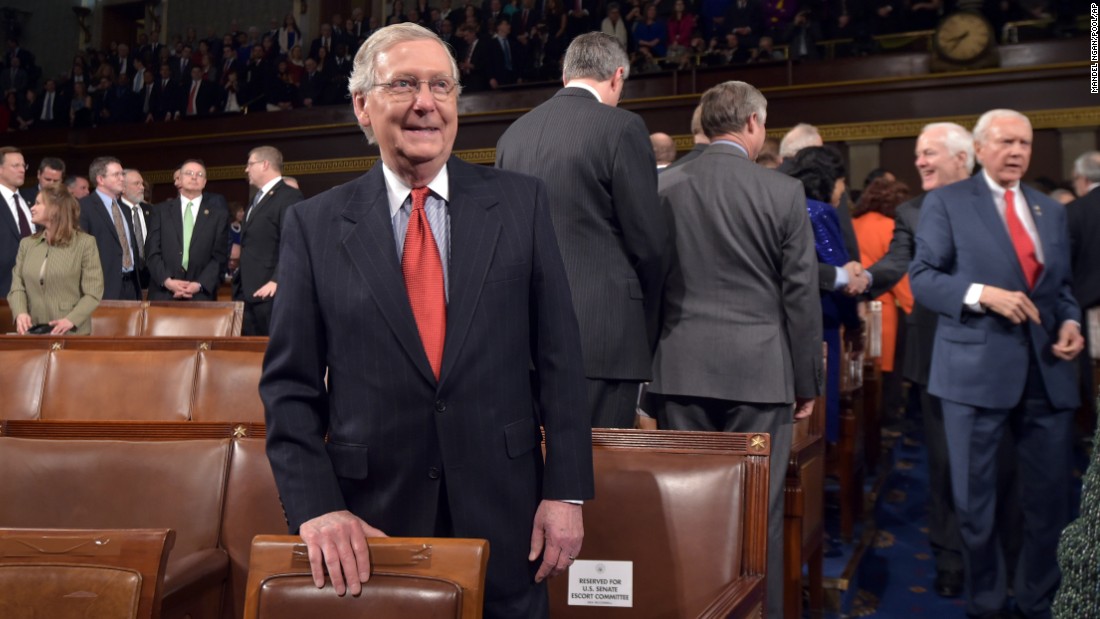 At the heart of his message is a Robin Hood-style plan to raise taxes on wealthy Americans’ investments and financial institutions and use that money to foot the bill for free community college tuition and new tax credits for child care and two-worker households.

That proposal stands next to no chance of clearing Congress. But — along with campaign-style events and interviews with YouTube stars touting his initiatives both before and after the speech — Democrats hope Obama’s decision to play up the parties’ philosophical differences will remind Republicans who now control both the House and the Senate of the political force they couldn’t overcome in 2008 and 2012.

Republicans, though, see a President in denial — one who hasn’t learned anything from the shellacking that cost his party the Senate in November; whose veto threats and tax-and-spend proposals are a lame duck flailing as his influence fades.

The President’s “proposals are so out of touch you have to ask if there is any point to the speech,” Republican National Committee Chairman Reince Priebus tweeted.

But she also said now that her party controls both the House and the Senate, changes are coming — and she hit Obama’s signature health care law while doing it.

“Americans have been hurting, but when we demanded solutions, too often Washington responded with the same stale mindset that led to failed policies like Obamacare,” Ernst said. “It’s a mindset that gave us political talking points, not serious solutions.”

Obama’s 2012 Republican opponent, Mitt Romney — who is considering a 2016 run for the White House — called the speech “disappointing.”

Romney said Obama “is more interested in politics than in leadership. More intent on winning elections than on winning progress, he ignores the fact that the country has elected a Congress that favors smaller government and lower taxes.”

But Hillary Clinton, the leading 2016 Democratic contender, praised Obama’s speech, tweeting that the President “pointed [the] way to an economy that works for all. Now we need to step up and deliver for the middle class.” 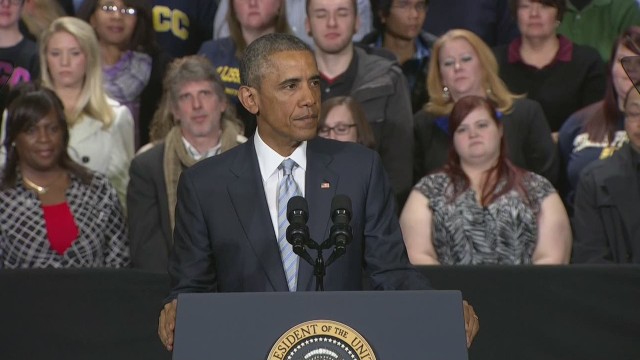 GOP’s rebuttal: ‘We heard the message you sent in November’

But the White House is wagering that — with free trade and cybersecurity, two potential areas for deals, as the major exceptions — there’s little to be gained in trying to bargain with a Congress already bent on forcing showdowns with Obama on immigration, the Keystone XL pipeline, Cuba, health care and more.

They see an opening: The economy has improved, the President’s approval rating now tops 50% for the first time in years, and, free of the constraints he felt ahead of the midterm elections, an emboldened Obama is unfurling a series of executive actions to check item after item off his long-stalled to-do list.

This could be his best shot at pivoting from an unending series of fiscal crises and legislative battles toward an economic debate that could set the tone for the last two years of his presidency — and for a 2016 race that had been about moving past him. 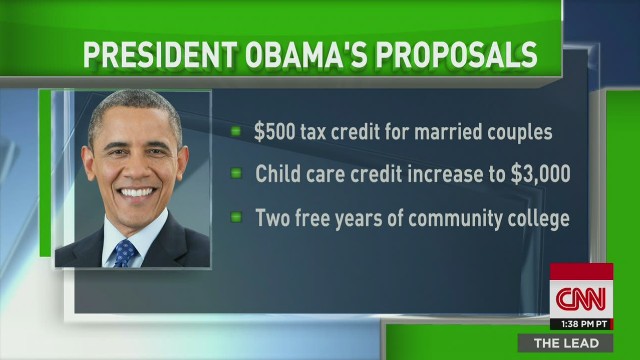 Taking top billing in Tuesday night’s speech is the tax-and-spend plan Obama has rolled out in recent days.

The benefits would largely go to students and young families: The child care tax credit would triple to $3,000; households in which both spouses work could qualify for a new $500 credit; and college students and those repaying loans could get breaks thanks to Obama’s plan to make two-year community college degrees free.

Footing the bill are tax hikes on the rich: a total of $320 billion over 10 years by targeting wealthy individuals and banks. Paying most of the price would be couples earning more than $500,000, who would see their capital gains rate jump from 23.8% to 28%. More inherited assets would be subject to capital gains taxes and top financial firms would face new fees.

Reality check on Obama’s State of the Union proposals 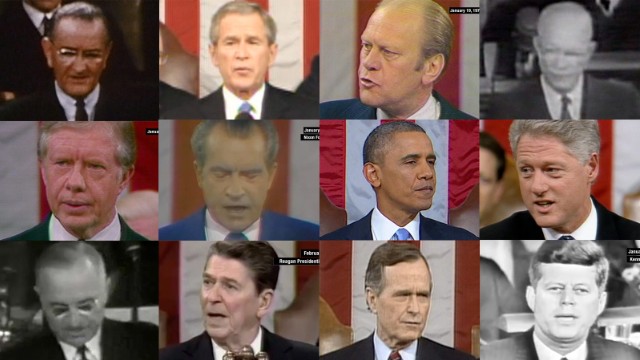 Obama is also making his own moves to give federal workers at least six weeks of paid maternity leave once their children are born — and he’s lobbying lawmakers to pass a bill allowing workers to earn up to seven paid sick days, and pushing local governments to set up their own sick leave programs.

Before the speech, Republican congressional leaders made clear that Obama’s proposals are dead on arrival.

“It all looks like the same old tax and spend that the president has been advocating for the last six years,” Senate Majority Leader Mitch McConnell (R-Kentucky) said.

“Hopefully that’s just rhetoric,” McConnell said. “He knows we’re not likely to pass these kinds of measures. And we’ll still look for things that we can actually agree on to try and make some progress here.”

Here are several other issues that have dominated the news in recent weeks, and how Obama addressed them in the prepared text of his speech:

FIGHTING ISIS: Obama said that “American leadership, including our military power” has played a key role in stopping ISIS, and called on Congress to authorize the use of military force against the group in Iraq and Syria. 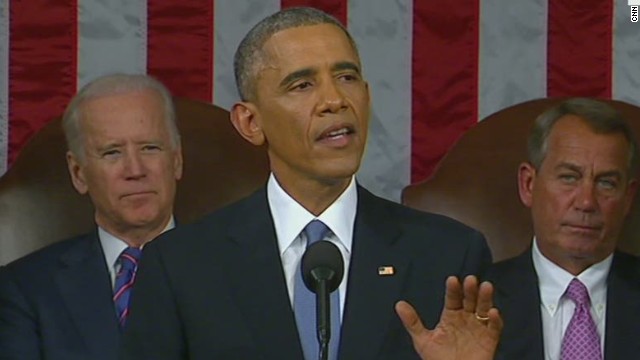 “Instead of getting dragged into another ground war in the Middle East, we are leading a broad coalition, including Arab nations, to degrade and ultimately destroy this terrorist group. … This effort will take time. It will require focus. But we will succeed,” he said. “And tonight, I call on this Congress to show the world that we are united in this mission by passing a resolution to authorize the use of force against ISIL.”

CYBERSECURITY: The President asked Congress to approve legislation that would allow government and businesses to work together more closely to thwart online attacks — a proposal that could win the support of the GOP-led Congress.

“No foreign nation, no hacker, should be able to shut down our networks, steal our trade secrets, or invade the privacy of American families, especially our kids,” Obama said. “We are making sure our government integrates intelligence to combat cyber threats, just as we have done to combat terrorism. And tonight, I urge this Congress to finally pass the legislation we need to better meet the evolving threat of cyber-attacks, combat identity theft, and protect our children’s information.”

CUBA: Perhaps the richest pageantry of the night is over Obama’s recent move to thaw the decades-old economic and diplomatic freeze with the small island country. Obama had invited Alan Gross, the U.S. contractor whose release from a Cuban prison he had secured in November. The President’s top critic, Sen. Marco Rubio (R-Fla.), had asked Cuban activist Rosa María Payá to come as his guest. She’s the daughter of Oswaldo Payá, a pro-democracy activist who was killed in a 2012 crash in which the car’s driver has said it was deliberately targeted by Cuban government officials. 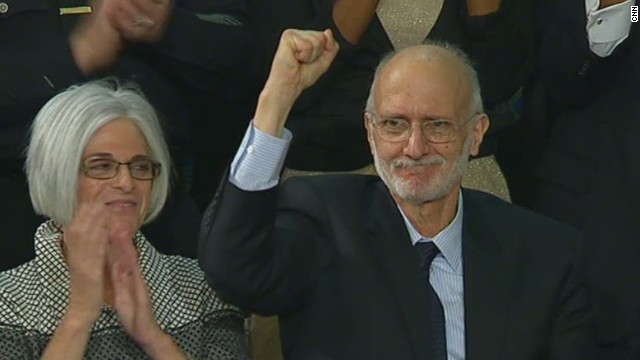 “When what you’re doing doesn’t work for fifty years, it’s time to try something new,” Obama said. “Our shift in Cuba policy has the potential to end a legacy of mistrust in our hemisphere; removes a phony excuse for restrictions in Cuba; stands up for democratic values; and extends the hand of friendship to the Cuban people. And this year, Congress should begin the work of ending the embargo.”

IRAN: The White House had extended the deadline for its negotiations with Iran to end the country’s nuclear program, but lawmakers have said they’ve run out of patience with the Iranian regime and want to impose new sanctions. Obama urged them to wait.

“There are no guarantees that negotiations will succeed, and I keep all options on the table to prevent a nuclear Iran. But new sanctions passed by this Congress, at this moment in time, will all but guarantee that diplomacy fails — alienating America from its allies; and ensuring that Iran starts up its nuclear program again,” he said. “It doesn’t make sense. That is why I will veto any new sanctions bill that threatens to undo this progress.”

FREE TRADE: Obama risked angering his own base by asking lawmakers to hand him authority to fast-track Pacific Rim and European Union trade deals through Congress with limited debate and no amendments — a power seen as crucial to finalizing those negotiations with foreign leaders. He posited the trade deals as an opportunity to combat China’s growing influence in Asia.

“Why would we let that happen? We should write those rules. We should level the playing field. That’s why I’m asking both parties to give me trade promotion authority to protect American workers, with strong new trade deals from Asia to Europe that aren’t just free, but fair,” he said.

And in a move to acknowledge liberal criticism, Obama said: “Look, I’m the first one to admit that past trade deals haven’t always lived up to the hype, and that’s why we’ve gone after countries that break the rules at our expense. But 95% of the world’s customers live outside our borders, and we can’t close ourselves off from those opportunities. More than half of manufacturing executives have said they’re actively looking at bringing jobs back from China. Let’s give them one more reason to get it done.”

INTERNET ACCESS: In an in-the-weeds regulatory proposal that could result in much-faster Internet access for many cities and states, Obama is calling on the Federal Communications Commission to override 19 states’ laws against municipalities setting up their own broadband infrastructure.

“I intend to protect a free and open Internet, extend its reach to every classroom, and every community, and help folks build the fastest networks, so that the next generation of digital innovators and entrepreneurs have the platform to keep reshaping our world,” Obama said.