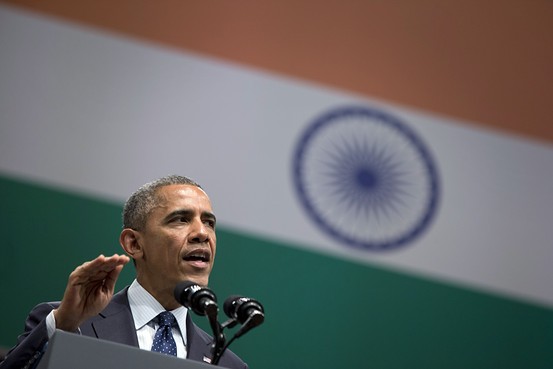 wrapping up a three-day visit to New Delhi, exhorted an audience of Indians to work to promote gender equality and overcome religious divisions.

After two days of effusive praise of Indian Prime Minister

and evocations of India’s potential, the president said, “India will succeed so long as it is not splintered along the lines of religious faith.”

“In India and America, our diversity is our strength,” Mr. Obama said. “We have to guard against dividing ourselves along sectarian lines.”

Mr. Modi is a politician with deep Hindu nationalist roots. His party, the Bharatiya Janata Party, faces criticism from its opponents for trying to advance a religious agenda and erode secularism in India, where over 80% of the population is Hindu and around 13% is Muslim.

“Every person has the right to practice their faith how they choose or to practice no faith at all and to do so free from persecution,” Mr. Obama added in his speech to around 2,000 invited guests including India’s Nobel Peace Laureate Kailash Satyarthi.

“Nowhere is this more important than in India,” the president said.

The president also urged India to treat its women better and to give them more opportunity. “When women are able to work, families are healthier,” he said.

Women everywhere should be able “to walk the street or ride the bus and be safe” and be “treated with respect.”

Since the fatal gang rape of an Indian student on a bus in Delhi in December 2012, India has been engaged in a nationwide bout of soul searching about violence against women. Even so, it is a problem that has persisted despite changes to the laws to protect women against sexual violence including stricter punishments for rape.

Write to Gordon Fairclough at gordon.fairclough@wsj.com