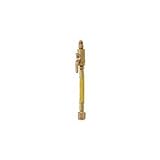 CHARLOTTESVILLE — There is no evidence to support claims in a Rolling Stone article that a University of Virginia student was gang raped at a campus fraternity in September 2012, police said, noting that a five-month investigation led detectives to discredit numerous claims about the alleged assault.

Police Chief Timothy J. Longo said Monday that the police department had multiple meetings with “Jackie” — the woman who said she was gang raped at a fraternity party — and that she declined to speak about the alleged incident or provide any information about it. Detectives determined that the fraternity did not host a party the night of the alleged attack, and police said they did not find anyone matching the description of the alleged attackers.

“We’re not able to conclude to any substantive degree that an incident occurred at the Phi Kappa Psi fraternity house or any other fraternity house, for that matter,” Longo said at a news conference. “That doesn’t mean something terrible didn’t happen to Jackie. . . . We’re just not able to gather sufficient facts to determine what that is.”

The investigation was spurred by allegations of a brutal fraternity house gang rape described in a 9,000-word magazine account that went viral online in November. The Rolling Stone report unraveled under scrutiny, as the accuser’s version of events was publicly challenged by her friends, members of the fraternity and sexual assault advocates on campus. After Washington Post reports revealed flaws in the account, Rolling Stone’s editors backed away from it.

Longo’s statement was the first official discrediting of the magazine’s account, but he said he would keep the investigation open for witnesses might want to come forward with information about an attack.

“Chief Longo’s report underscores what I have known since well before the publication of the Rolling Stone article: that we at the University are committed to ensuring the health and safety of all of our students,” U-Va. President Teresa Sullivan said in a statement.

The Rolling Stone article examined allegations of sexual assault at U-Va. and what it characterized as the administration’s apparent lackluster response. The article fueled a national debate about the prevalence of sexual violence on college campuses. The story focused on Jackie, a junior who told the pop culture magazine that she was attacked by seven men while two others watched during a party at the Phi Kappa Psi fraternity house in 2012 after she went on a date with one of the men.

[Timeline: Allegations of rape at U-Va.]

The magazine account roiled the college campus and set off protests, vandalism at the fraternity house and self-reflection. U-Va. administrators responded to the explosive article by suspending the university’s Greek system until early January and held a number of events aimed at promoting awareness on campus about sexual assault and student safety.

In a Monday statement, Phi Kappa Psi officials said that they cooperated with the police investigation and that the fraternity is exploring legal options against Rolling Stone.

“These false accusations have been extremely damaging to our entire organization, but we can only begin to imagine the setback this must have dealt to survivors of sexual assault,” Stephen Scipione, U-Va. chapter president, said in the statement. “We hope that Rolling Stone’s actions do not discourage any survivors from coming forward to seek the justice they deserve.” The campus of the University of Virginia is seen earlier this month in this file photo. (J. Lawler Duggan/For The Washington Post)

In interviews with The Post in November and December, Jackie said that she stood by the account she provided to Rolling Stone.

“I never asked for this” attention, she said in an interview. “What bothers me is that so many people act like it didn’t happen. It’s my life. I have had to live with the fact that it happened — every day for the last two years.”

Palma Pustilnik, a lawyer representing Jackie, declined to comment Monday. The Post generally does not identify victims of sexual assaults and has used Jackie’s real nickname at her request.

Jackie also told The Post numerous times that she never expected that a police investigation would result in charges in her case. Jackie said she knew there was little forensic evidence that could prove the 2012 allegations.

A Post investigation into the claims found significant inconsistencies in the account. Phi Kappa Psi fraternity members strongly rebutted the allegations, saying they did not have a party on the night in question and did not have a member fitting the description of the alleged attackers. One of her alleged assailants — who Jackie told friends she was on a date with that night — turned out not to be a U-Va. student, had not been in Charlottesville in years, attends another school in another state and said he barely knew Jackie. Also, Jackie’s friends told The Post that her version of events to the magazine did not match what they saw in the immediate aftermath of when she claims she was assaulted.

[Dubious statistic that one in five women sexually assaulted]

Police said that interviews with about 70 people and an investigation spanning hundreds of hours confirmed these same findings. They also said that an alleged physical assault Jackie reported in May 2014 — when she told police that four men followed her and threw a bottle at her face — had significant inconsistencies. It was at that time that police twice asked Jackie about the alleged sexual assault at the urging of the university, and Jackie declined to talk to police about it.

After the Rolling Stone article was published, Longo’s police force began investigating the claims at Sullivan’s behest. Longo said they were “horrific allegations,” and police immediately went to work. He said Jackie agreed to an interview with police after the school’s break over Thanksgiving, but on Dec. 2 went to the department with a lawyer and declined to give police a statement, answer any questions or give police access to her university records.

Detectives interviewed numerous Phi Kappa Psi members, including most of those who lived in the house in September 2012, the time of the alleged attack. Longo said police found photographs of the house on the night in question that show it empty, and they reviewed other records that indicate the house did not host a party that night.

The chief said police also interviewed Jackie’s friends who met with her the night that she said she left the fraternity bloody and shaken. But they told police what they had earlier told The Post: She was not physically injured and met them in a different location than was described in the Rolling Stone account.

Police also investigated the name for an alleged attacker — Haven Monahan — a name that Jackie gave her friends as the person she was going on a date with that night. That name did not match anyone at the fraternity or at the University of Virginia, and police were unable to determine whether such a person exists.

Late last year, The Post pursued information about that same name, which ultimately appeared to be a combination of names belonging to people Jackie interacted with while in high school in Northern Virginia. Both of those people — who attend different colleges and bear no resemblance to the description Jackie gave of her attacker — said in interviews that they knew of Jackie but did not know her well and did not have contact with her after she left for U-Va.

The Post also obtained a photograph that was purportedly of Monahan and determined that the photograph was that of a third person, a student who attended high school with Jackie. That other person is a student at a different college out of state and was competing in an athletic event on the date of the alleged attack. He said he had not been in Charlottesville for at least six years.

Longo said that police also interviewed a second U-Va. student that Jackie had identified as one of her attackers. In early December, The Post spoke to the student, a 2014 graduate and fraternity member who worked as a lifeguard at the school’s aquatic and fitness center. Longo said Monday that the former student had provided evidence, including financial and school records, which showed he had never had any interaction with Jackie.

Rolling Stone publisher Jann Wenner announced in December that Columbia University would examine the magazine’s reporting of the U-Va. story. Columbia Journalism School dean Stephen Coll told The Post that the school’s investigation will be published by Rolling Stone on April 8.