(CNN)Charlottesville Police said Monday that investigators found no ‘substantive basis’ to support a University of Virginia female student’s story that she was raped at the Phi Kappa Psi house, an account that Rolling Stone published last November.

“Jackie” told the magazine that in late September 2012, she was assaulted at the house, the article said. Police chief Tim Longo noted that just because police found no evidence to support her account, “That doesn’t mean that something terrible didn’t happen to Jackie” on the day in question.

Longo said he welcomed any information that might still be out there about the case.

The Rolling Stone story generated controversy from the moment it came out, first sparking a debate about the prevalence of rape on college campuses throughout the country. But then the controversy turned toward the story’s content when apparent contradictions and discrepancies in the article came to light.

Rolling Stone said it did not get the accounts of those accused in the piece, and apologized. Editors vowed to conduct their own probe which is expected to be published in early April. 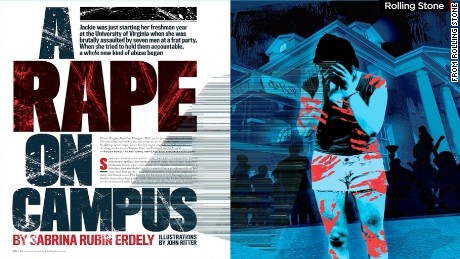 Longo said that “Jackie” did not give police a statement during their investigation.

Nine out of 11 people at the fraternity house at the time the sexual assault allegedly occurred talked to police, Longo said. None of them said they knew about a rape, he said, and investigators further determined that it was unlikely a party even happened at the fraternity house on the day in question as was alleged in the Rolling Stone story.

The Rolling Stone reporter, Sabrina Rubin Erdely, talked to police, authorities said, but there were some questions she declined to answer for journalistic reasons. It’s unclear what those questions were.

After the story’s publication, UVA suspended the fraternity’s activities, and outrage spread throughout campus as many struggled to comprehend the horrific experience that Jackie said she endured.

The article also suggested the school failed to respond to the alleged assault.

Rolling Stone editors said they chose not to contact the man who allegedly orchestrated the attack on Jackie, or any of the men she said participated in her alleged assault, “because the editors feared retaliation against her,” the magazine said, adding that it regretted that decision.

“In the face of new information, there now appear to be discrepancies in Jackie’s account, and we have come to the conclusion that our trust in her was misplaced,” Rolling Stone said in December.

Rolling Stone Managing Editor Will Dana later tweeted that “the truth would have been better served by getting the other side of the story.”

Rolling Stone issued an apology for discrepancies in its article and began to fact-check it. Steve Coll, dean of the Columbia University Graduate School of Journalism, has been leading the independent review, CNN senior media correspondent Brian Stelter reported Sunday. Stelter said there has been much speculation about Coll’s findings.

Columbia University’s review will be published in early April in the magazine.

CNN’s Brian Stelter and Michael Martinez contributed to this report.