Racing Into The Future With Phone-Controlled Robot Cars – Kotaku

When I was a kid I had a slot car racing set, but not many friends, so I used to play against myself with a controller in both hands. If only the robotic race cars of Anki Overdrive had been around back then.

Anki first rolled onto the consumer robotics scene back in 2013 with Anki Drive, and while I wrote about the set extensively, I never actually got a chance to play it. 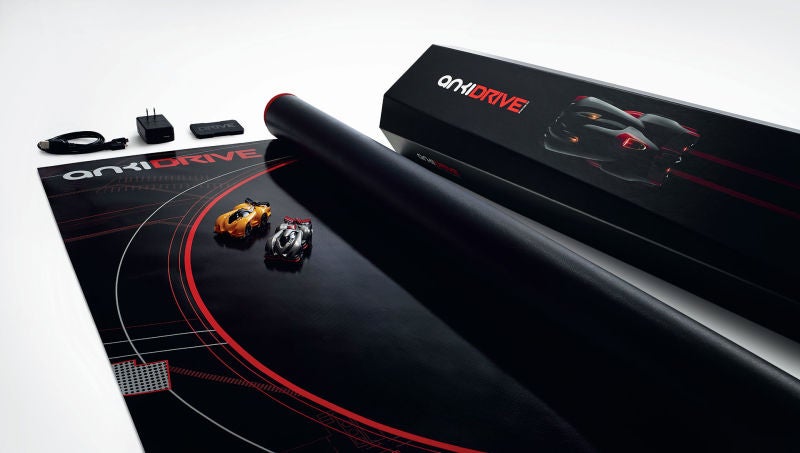 Now had I really wanted to play it I could have. The truth of the matter was racing cars—even extremely cool cars—around on a flat roll-out mat was not exciting enough for me to bother. I loved the idea of artificially intelligent vehicles that learn and upgrade via phone or tablet apps while you race, but I wanted more.

What I wanted was Anki Overdrive. Upgraded cars, modular track with eight track customization options out of the box—now this is exciting.

And so I was pleasantly surprised when a box containing the $149.99 Starter Kit, several expansion packs and two extra cars showed up at my house. A house with two messy children, a messy dog and two messy cats. A house with really bad carpet. And so I went to my mother’s place to shoot the video atop the article, figuring her floors were cleaner. Oh well.

Basic track assembly took maybe five minutes, snapping together magnetically with ease. Charging the two included cars maybe ten or so. All I needed to do was download the app—which allows for multiplayer race across both Android and iOS—and I was off to the races.

With no friends about to play with, I raced against the AI in a series of training battles, which explained how to adjust speed, fire weapons and add accessories to the vehicles via the mobile app—items and upgrades the cars themselves keep track of.

It’s a racing game, but it’s also a battle game. Each car is equipped with special weapons and powers aimed at giving them an edge over the competition. When weapons are fired via in-app buttons, lights flash on the vehicles. Cars getting hit flash lights and stall, while AI opponents make comments from your control device of choice.

The app itself is loaded with personality, much more than I’d seen from the original Anki Drive. A female voice walks you through the first few races before leaving you free to participate in any of the game’s four Open Play modes—Race, Battle, King of the Hill or Time Trial.

I spent over an hours playing with the cars and tracks. I added a jump, which most of the vehicles took to quickly. I got all four cars on the track at once, which probably would have gone better without the jump). Cars knocked from the track valiantly attempted to crawl back through my mother’s carpet—those brave, brave cars.

I’ve only spent a little time with Anki Overdrive, but I plan on spending a lot more. I’ve got plans for new track configurations. I ran to the store to pick up the two cars I was missing, Big Bang (who doesn’ like jumps) and Guardian.

I came home with a $10 Bank Turn Kit, because I wasn’t quite ready to spend $100 on a pair of high-tech robot cars. The enthusiasm is still there, but enthusiasm can’t buy me cars. Plus bank turns are pretty cool. Much nicer than floor mat turns.

Maybe once I get my boys playing Anki Overdrive. I’ve not had much luck getting them to work traditional game controllers yet but they love phones and tablets, and once they make the connection that what they do on the screen affects what’s happening on the track—that’s going to be magic, and neither of them are going to be that lonely little boy holding the two slot car controllers.