After a full day spent lying on her back on a muddy wooden plank, chipping with painstaking care at the underside of a stone block to free the time capsule hidden within, Museum of Fine Arts conservator Pam Hatchfield sat up in front of the State House to a round of applause, a green box held delicately in her hands.

“I feel happy and relieved. And excited. And really interested to see what’s in this box,” she said Thursday night, after posing for a selfie with the capsule for her mom. The extrication took more than seven hours and involved about a dozen workers.

The original contents of the time capsule were first placed in 1795 by Governor Samuel Adams, Paul Revere, and William Scollay in a ceremony that started in downtown Boston and proceeded to the State House, according to historical accounts. It was unearthed during emergency repairs to the foundation in 1855 and then buried again, and had not seen daylight until it emerged on Thursday.

“Hopefully there will be no damage and we will be able to observe the artifacts that trace us back to the history not only just of this building, but of our Commonwealth and our country,” said Secretary of State William Galvin, who was on hand for the capsule’s first appearance in more than 150 years.

The capsule is believed to include a collection of silver and copper coins dating from between 1652 and 1855; an engraved silver plate; newspapers; the seal of the Commonwealth; cards; and a title page from the Massachusetts Colony Records, according to Meghan Kelly, a spokeswoman for the Executive Office of Administration and Finance.

Hatchfield, who is head of Objects Conservation at the Museum of Fine Arts, said the corroded copper alloy box that holds the collection was undamaged by the removal process, and appeared to be in good shape. It was a little smaller than a cigar box and, she said, heavier than she expected.

The box was taken by State Police escort to the Museum of Fine Arts, where Hatchfield said it will be X-rayed to determine the contents. There was some concern, Galvin said, that there may be some damage to some of the coins, which may have been washed in acid before the box was reburied in 1855.

“It will be opened probably sometime next week,” said Galvin. The contents will be examined, he said, but the time capsule will not remain unburied. “Ultimately it will be put back in the box and ultimately back in the stone.”

Galvin said officials have not yet decided whether they will add any objects to the capsule before re-burying it. The capsule was discovered during the course of a water infiltration investigation at the State House, which identified the corner where it was hidden as an area of concern.

It is believed to be one of the oldest time capsules in the state, according to Kelly. In October, a century-old time capsule was opened after it was removed from its perch in the head of a golden lion statue that had sat atop the Old State House in downtown Boston. Its contents included sealed letters, photographs, and newspaper articles in near-perfect condition.

On Thursday, excavation of the State House time capsule began at about 9 a.m., with workers unwedging the stone block from the corner of the building and propping it up on blocks of wood so Hatchfield could slide underneath. The block was not flipped upside down, said Hatchfield, because she did not want to risk dislodging any of the contents.

From about 10:30 a.m. to 4:30 p.m., Hatchfield tapped away at the block, taking periodic breaks to warm up away from the whipping wind and snow. Workers brought her a space heater. The plaster that sealed the box in, she said, was much harder than she anticipated.

As she worked, tiny coins fell out of the plaster. During the 1855 reburial, public officials threw the coins in for good luck. Michael Comeau, executive director of the State Archives, said they appeared to be silver.

As the day wore on, Hatchfield used a small circular saw and a drill to try to free the capsule, and several times, she appeared to think she was close, only to have the box remain stuck. It was the most physically challenging conservation job she has ever done, she said.

“I have been privileged to spend all of my working life handling incredibly precious and important objects, and it is very exciting every single time,” said Hatchfield. “The sense of continuation of history that you get by entering a museum or historic site, but also by having it in your hands, is incredibly rewarding and enriching. And it gives meaning to a lot of people.” 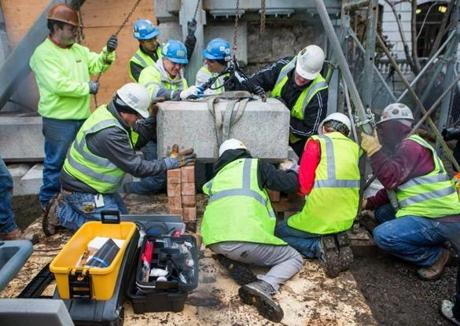 Aram Boghosian for The Boston Globe

A crew worked on the cornerstone. A time capsule was placed there in 1795, historical records indicate.

Joshua Miller and Frank Phillips of the Globe staff contributed to this report. Evan Allen can be reached at evan.allen@Globe.com.

Correction: An earlier version of this story misspelled the name of Pam Hatchfield.