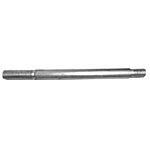 GLENDALE – Police say a 17-year-old boy has been arrested after reportedly crashing into seven cars at a Glendale apartment complex overnight.

Residents near 79th Avenue and Bell Road called police after seeing a vehicle speeding through the parking lot and again after hearing a crash.

Officers found the car, a red BMW, had hit multiple parked cars and a parking structure. Some of the vehicles had extensive damage, but fortunately, no one was injured.

The teen reportedly tried to contact his girlfriend at the complex, but when she wouldn’t open the door, he took off recklessly.

Police say it appears that he did not intentionally hit the cars.

The teen was taken into custody after attempting to leave the scene on foot and will be charged with hit-and-run and criminal damage.