Since the day that Lee Iacocca and Hal Sperlich rolled out the first Dodge Caravan more than three decades ago, the minivan form factor has remained the ultimate family hauler. With sliding doors, folding/removable seats and an ever-increasing number of cup-holders, minivans are supremely flexible, utilitarian and garageable. While Chrysler has formidable competitors today from Honda, Toyota and to a lesser degree Kia, it has just launched what may be the ultimate expression of the type in the form of the Pacifica Hybrid which I just spent a week with.

Chrysler has taken a very interesting approach to promoting the Pacifica Hybrid. They seem to have recognized that the potential market for an electrified minivan is not the same as the market for something like a Toyota Prius Prime or Chevrolet Volt. Despite what the branding implies, this Pacifica is actually a plug-in hybrid like those well known green cars. 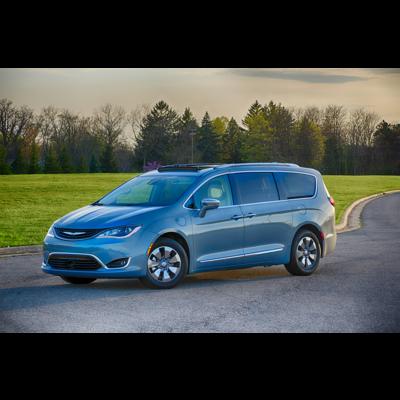 However, while most plug-in hybrids offer drivers ability to select different drive modes like the ability to go EV only or save the battery charge until later, Chrysler does none of this. Climb behind the wheel of this minivan and you’ll be hard-pressed to distinguish it from the conventional drive version. Their is some additional information available about energy flow in one of infotainment screens and the fuel efficiency displays in the cluster provide indications of battery state of charge and whether the engine is running.

The only direct functional control the driver has is the ability to switch the rotary shifter from Drive to Low to get extra regenerative braking, but this really isn’t much different from doing the same in the non-hybrid to get a lower gear in the transmission.

The core idea here is that busy parents that are hauling multiple kids around don’t have time for this nonsense. They just want to get in and drive and not worry about getting all the settings right for maximum efficiency. Thus, the only thing the Pacifica hybrid driver needs to do is plug the van in when they come home at night and unplug it in the morning. No muss, no fuss.

So what do drivers get for this low-effort electrification? Surprisingly, a lot.

After plugging in the Pacifica to a 110-volt outlet in my garage overnight to give the 16-kWh battery a full charge, I did a couple of laps of my usual EV urban test loop.I started off with the shifter set to L. Like most electrified models, low gets you significantly more regenerative braking. In this case, while monitoring the hybrid information display that shows power input/output from the motors, lifting off the accelerator in D gets you about 10-kW of charging power and deceleration typical of a conventional automatic transmission. Switching to L bumps that up to anywhere from 25 to 40 kW depending on fast you are going and it feels like you’ve done a downshift or two. It’s not as aggressive as the BMW i3 or Chevrolet Bolt, but I’ve come to prefer more aggressive regenerative braking no matter how much I can get.

When I set out, the battery was at 100% and showed an estimated range of 40 miles. I drove in a reasonably sedate manner, not hyper-miling but not driving like a @Dodge Demon either. At the end of the loop, I had 60% charge and 24 miles of range left. For lap 2, I used D and got only slightly worse results with seven miles left on the range estimate and 19% in the battery. The fuel economy estimate was 68.3 mpg which I’m assuming is MPGe since the engine was off the whole time.