This year’s New York International Auto Show (NYIAS) is currently underway at the Jacob H. Javits Center in Manhattan, and in recent years New York has become an increasingly important event for the auto industry. NYIAS is almost at the point of rivaling Detroit as the premiere US show. We spent a couple of days pounding the floors to find out what’s new and interesting, and we’ve already reported on some of the more significant debuts—like Mazda’s MX-5 RF and Porsche’s 718 Boxster. There are simply too many noteworthy vehicles and technologies on display these days to give the fuller review treatment to all, so what follows is our “best of the rest,” in alphabetical order, because we don’t want to play favorites.

A is for Acura, and that means the Acura NSX GT3. This is a racing version of the company’s new hybrid supercar, built on the same production line in Marysville, Ohio. It’s shorn of the road car’s hybrid system, however. We hope to see some of these competing in the IMSA WeatherTech Sportscar Championship next year.

BMW usually brings something interesting along from the vault, and this year was no exception. Atop its stand was a gorgeous M1 sports car from the 1970s.

Last year, Fiat revealed its 124 Spider, a two-seat roadster that shares a platform with the Mazda MX-5. Our pick of the range is the 124 Spider Elaborazione Abarth—which keeps the same 160hp (120kW), turbocharged 1.4L MultiAir engine but adds sportier suspension, a limited-slip differential, and some styling tweaks. You can get the Abarth, with either a six-speed manual or an automatic, later this year. Expect to pay under $30,000.

Ford’s Focus RS continues to taunt us at auto shows. It’s the third-generation Focus RS but the first one destined for these shores. It has 350hp (260kW) under the hood and all-wheel drive, and the clever electronic rear differential has a “drift mode” for when you need to express your inner hooligan. It can be yours for a shade under $36,000.

General Motors is up next. The Chevrolet Bolt electric vehicle was on display, finally giving us a chance to check out the production interior of this mass-market, long-range EV. The 640hp (447kW) Camaro ZL1 also made an appearance, winning the hearts of most of the people we spoke to. GM stablemate Cadillac also had some performance versions on offer—the ATS-V and CTS-V. We particularly liked the naked carbon fiber vents and splitters. 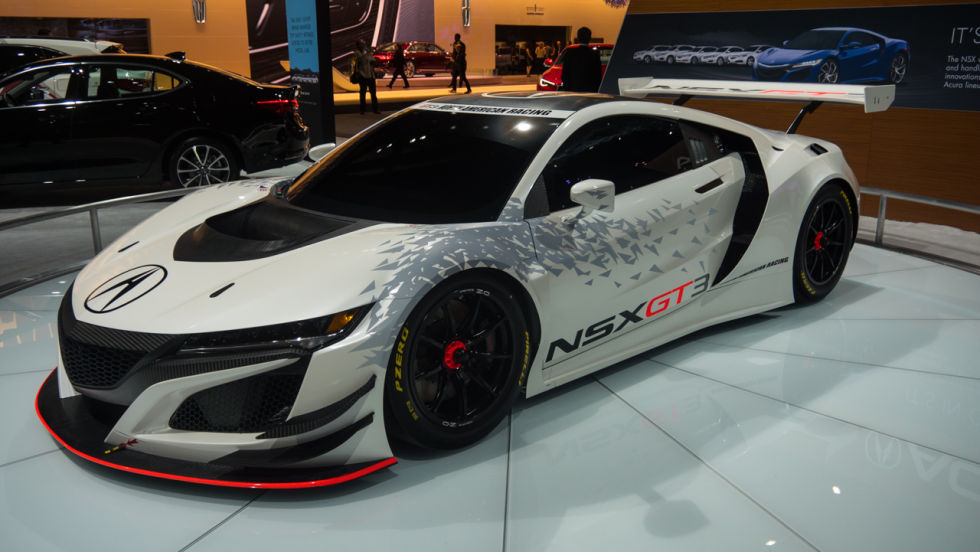 Acura’s new NSX race car. It loses the hybrid system from the road car, but gains a gigantic rear wing.

Honda left the cool concept cars in the warehouse this time. Its Civic was proudly wearing a 2016 North American Car of the Year award, after receiving the most votes from a panel of 53 US and Canadian auto journalists. The Civic hatchback prototype also looked most fetching in its matte-gray paint.

Hyundai has decided to split its Genesis luxury cars off into their own brand. Although we’ve yet to drive the G90, the interior is almost in the same league as Audi—mighty praise indeed. Pricing is yet to be announced. Fellow Korean brand Kia had a number of hybrids and EVs on its stand, including the Optima plugin hybrid—a mere $26,000.

On the other hand, “mere” isn’t a word you can use to describe anything from Koenigseggs, the Swedish hypercar firm. There was not one but two ‘eggs at NYIAS. The One:1—named because it has 1MW (1341hp) of power and weighs just 1,341kg, giving it a power-to-weight ratio of 1:1. Should you decide that 1341hp just won’t cut it, you’re in luck. The Regera is a hybrid hypercar (that does away with the transmission) packing a 1500hp (1119kW) punch. That should teach those pesky McLaren P1, Ferrari LaFerrari, and Porsche 918 owners!

We’re not sure who decided that Land Rover’s Evoque SUV needed a convertible version. But it has happened, and it was there.

Of more interest was Lexus‘ new flagship coupe. Yes, the V8 LC500 was pretty, but we’re more interested in its twin—the LC500h. The “h” obviously stands for hybrid, and this car’s hybrid drivetrain is very clever indeed. There’s a 3.5L V6 and two electric motors, as well as two transmissions (see the photo in the gallery for details). The only thing we’re not quite sold on is Lexus’ new “cheesegrater-hourglass” grille. The car goes on sale next year, but expect the price to be in excess of $100,000.

Subaru chose New York as the world premiere for its new Impreza. Still, with each successive generation we can’t help feeling the car gets further and further away from the models that won us (and you, if you played Gran Turismo) over in the 1990s and early 2000s. Subaru has yet to announce pricing, but we do know the new car will be built here in the US.

Toyota had a platoon of new Priuses on display. There were several of the fourth-generation hybrid, but also the new Prius Prime. This plugin hybrid version promises to be even more economical—Toyota has yet to obtain an official EPA economy rating, but it estimates the Prius Prime will match or beat 120MPGe thanks to a larger 8.8kWh battery and more efficient electric motor-generator. Sales start in late fall, and while pricing was unavailable, we expect it to be competitive with the Chevrolet Volt.

Last but not least is Volvo. We’re currently in the process of testing its XC90 SUV for a review, and if those vehicles are anything to go by, the new S90 sedan should also be a winner.

If you’re local to the Big Apple, the auto show runs until April 3. If you can’t make it out this year, we’ve got a handful of individual car profiles for you to peruse as you plan for 2017.