The Fight to Wrap Cheapo Cars in Luxurious Silence – WIRED

Luxury cars offer all sorts of perks to generate oohs and aahs: gesture controls, massage seats, self-driving capabilities. But you’re unlikely to appreciate one key feature until it’s gone: silence. High-end offerings from the likes of Mercedes-Benz and Lexus specialize in making their occupants feel cozy and insulated, even as massive engines propel them to Autobahn speeds.

In your cheapo car, meanwhile, blowing wind, humming tires, high-revving engines, and a hundred random vibrations conspire to make conversation a chore, exhaust the driver, and strain audio systems cranked up to mask the racket. That’s because the standard silencers—sound-absorbing insulation, pricey engineering, aerodynamic tricks, and sheer weight (heavier cars tend to be quieter)—are hard to move down market.

But in recent years, automakers catering to the road-going hoi polloi have found new ways to lower the volume, particularly for hybrid and electric vehicles that don’t have the benefit of an engine to mask other vehicle noises. The result: Economy cars now carry things like side mirrors that maneuver airflow away from your windows, suspensions that dial out road noise, expanding tape that plugs gaps, and frames to maneuver sound away from the car’s occupants—all developed with the help of mannequins with mics in their ears and giant spherical cameras that can “see” sound.

Turning Down the Volume

“[Noise, vibration, and harshness] performance immediately and directly influences our customers’ perception of vehicle quality and value,” says Honda engineer Andrea Martin, who tackled the problem for the 2018 Odyssey minivan. “But it’s even more fundamental. Low and mid frequency noise levels can dramatically contribute to driver fatigue, and higher frequency noise levels can also inhibit the ability to hear conversations in the vehicle.” You know what’s worse than a complaining kid? A kid shouting his complaints so he can be heard over that dang tire hum.

So Honda’s engineers started by adapting the platform from the Ridgeline pickup, with its improved rear suspension design that mitigates sound and vibration at the source. They launched what Martin calls a “comprehensive sealing strategy,” deploying paint sealers, insulating spray foam, and tape that expands when heated, so it fills gaps between the welded bits.

The team used acoustic glass and insulation, as well—two familiar tactics for premium cars that are now affordable enough for higher-volume products. Also trickling down: advanced engineering simulation technologies to design body structures where sound and vibration paths are reduced or eliminated. “These are all low-cost or cost-neutral opportunities that can be applied across an entire lineup,” Martin says.

In its battle against noise, Volkswagen relies on prevention. “The general approach is not to reduce noise by additional insulation, but rather avoid the creation of any disturbing noise in the first place through smart engineering,” says engineering rep Christian Buhlmann. For instance, the automaker replaced the flat firewall separating the engine compartment from the cabin in the new Golf Mk 7 with a waffle-shaped one that absorbs vibrations.

The Germans designed the sideview mirrors to channel wind away from the windows. The underfloor panels direct airflow beneath the car straight from front to rear, eliminating the noisy turbulence that free-flowing air generates. This sort of panel, usually reserved for high-end sports cars, also reduces vehicle drag, a boon for efficiency.

Before they can get to the shushing, of course, engineers must sort out what’s squawking. Nissan deployed a variety of laboratory and test-track strategies to pinpoint and measure sound coming from its new Titan pickup truck. They relied on “acoustic cameras” that create color-coded images highlighting the noisiest areas of a cabin, dozens of microphones surrounding vehicle exteriors to assess frame and powertrain noise, and real-world testing across a variety of road surfaces. (Tire design also contributes mightily to cabin acoustics, so the manufacturers work closely with tire makers to perfect the rubber compounds and tread design for each car.)

Nissan, which also folded in Bose acoustic noise canceling technology to the cabins of its Maxima, Murano, 370Z models, used that data to determine where to add insulation and body-sealing, as well as to design new hydraulic body mounts. That alone dropped low-frequency vibration by a full 10 decibels. 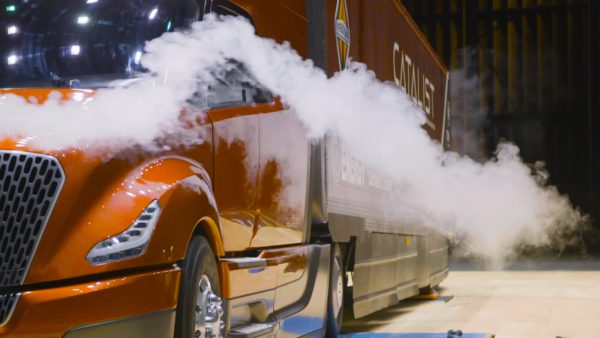 Inside the World’s Largest Wind Tunnel

For its bid to quash noise in its new CX-5 crossover, Mazda deployed dozens of sensors—even sticking some in the in the “ears” of mannequins sitting in the vehicle. They did real world testing, too, with regular humans. “We found, for instance, that at highway speeds the aerodynamic forces actually pulled the doors away from the car, letting in wind noise,” said Dave Coleman, Mazda’s chief of vehicle dynamics engineering. “So we created a deeper door seal to prevent that.”

Coleman’s team next added dampers on each strut to cancel out their acoustical footprint, inserted a sound blocker between the back seat and the cargo cover, tucked the windshield wipers beneath the hood to take them out of the slipstream, and added fabric to the bare metal surfaces inside the car, so they don’t reflect noise up from the below. “Those metal surfaces essentially turn into loudspeakers,” Coleman says.

Even the sound that does make it through is now routed rearward instead of toward the front of the car, thanks to tweaks in the metal frame specifically for this purpose. All of this comes in addition to the easy stuff—acoustic glass, tighter window channels, and more insulation behind door panels and in the pillars.

The effort pays off: The CX-5 isn’t just quieter than its competitors, it feels a hair above its class. Though things like the doors and seats don’t have the heft of those in fancier cars, the interior delivers the same blissful quietude you get in, say, an Audi Q7 or a Mercedes S-Class. Conversation is easy, music is no longer a battle tactic. It’s a perk you can neither see nor hear, but one you’ll appreciate, no matter how much you paid for your car.