Most visitors to Wolfsburg, Germany, will see the fantastic car museum at the Autostadt, but relatively few will take the two-minute drive to one of the country’s hidden gems, the Volkswagen AutoMuseum. From the outside, the Stiftung AutoMuseum Volkswagen may not look like much, especially compared to the glitz and glamour of the Autostadt, but if you’re a die-hard Volkswagen fan, the museum is a must-see—and at €6 ($7) for admission, it’s ridiculously cheap. During a recent trip to Wolfsburg, Automobile took a tour of the Volkswagen AutoMuseum. We can’t show you everything we saw—and we wouldn’t want to spoil the surprises—but here are some of the cooler vehicles you’ll find there. 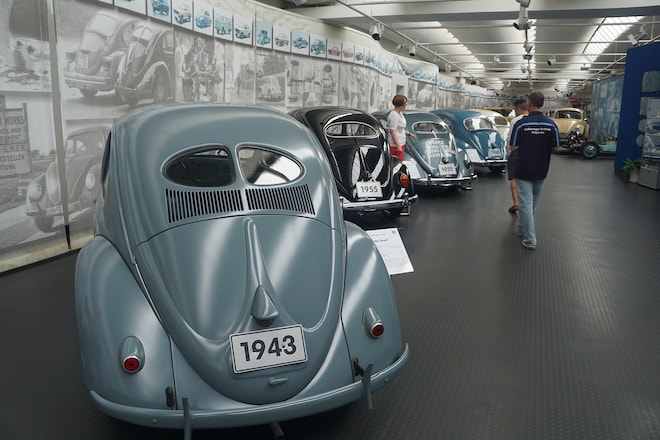 No surprise that the museum has a decent-sized collection of Beetles, which are known as Käfers in Germany. This 1943 Brezel Käfer—“Pretzel Beetle,” nicknamed for the shape of its split rear window—is the oldest in the museum, and a rare example of a wartime-era KdF-Wagen. 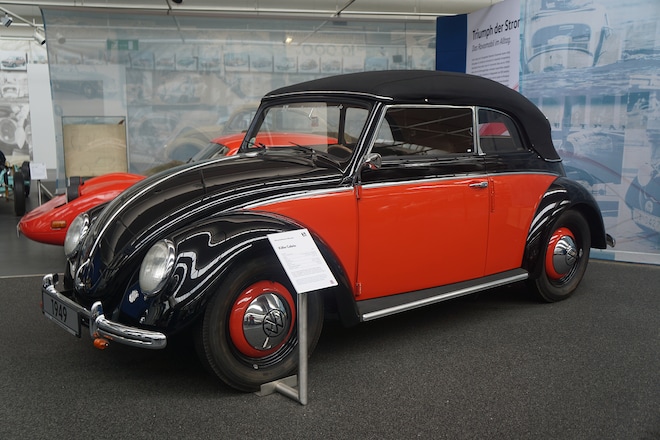 This Karmann-built 1949 cabriolet is an early example of the drop-top Volkswagen Beetle. Along with a handful of convertibles, the AutoMuseum has several beautiful examples of coach-built cars based on the Beetle platform. 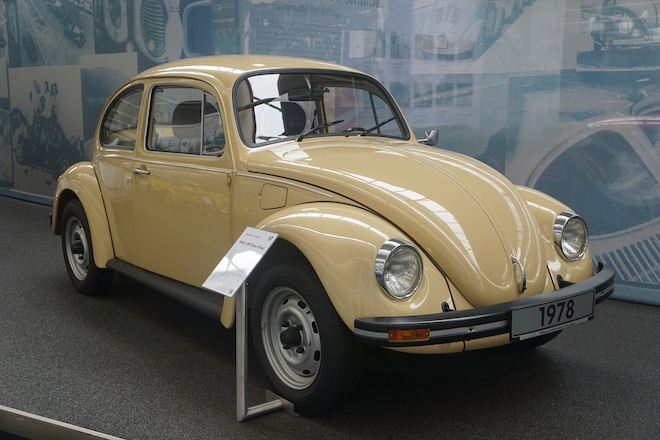 This was the very last Volkswagen Beetle to be built in Germany, rolling off the assembly line on January 19th, 1978. The AutoMuseum is also home to the 20 millionth Volkswagen Beetle, a limited-edition 1981 Silver Bug built in Mexico. 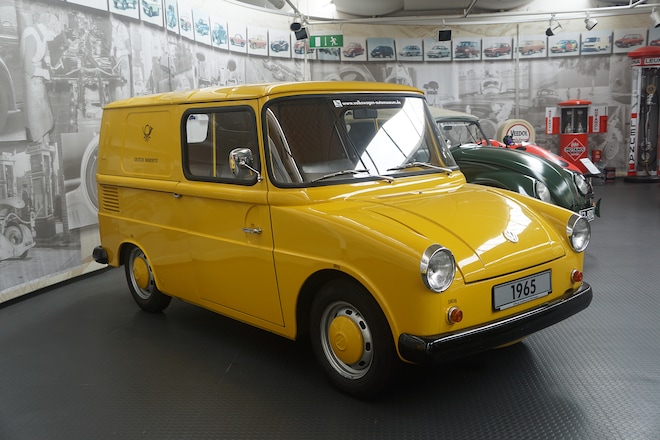 The Type 147 Kleinlieferwagon (small van) was commissioned by the German postal service, though the Swiss post office bought some as well. The 147 used the wider platform of the Type 14 (Karmann-Ghia) with the powertrain from the Beetle. Other parts were sourced from the Type 2 Transporter and Type 3 Fastback. Volkswagen built 6,139 examples between 1964 and 1972. Though they were prone to rust, the AutoMuseum’s example is in perfect shape. 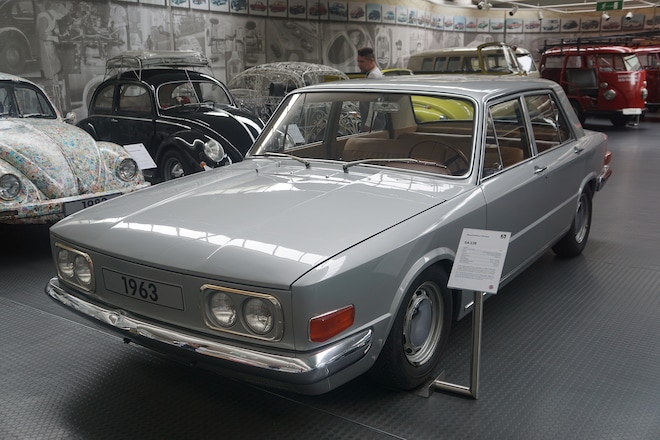 The AutoMuseum is home to several VW prototypes, most labeled EA for entwicklungsauftrag, which means development contract. The 1963 EA128 was Volkswagen’s vision for a large luxury car. Its three-place front bench allows it to seat six, albeit somewhat intimately. Six is also the cylinder count—the EA128’s 2.0 liter air-cooled horizontally-opposed engine was borrowed from the Porsche 911, which also made its debut in 1963. 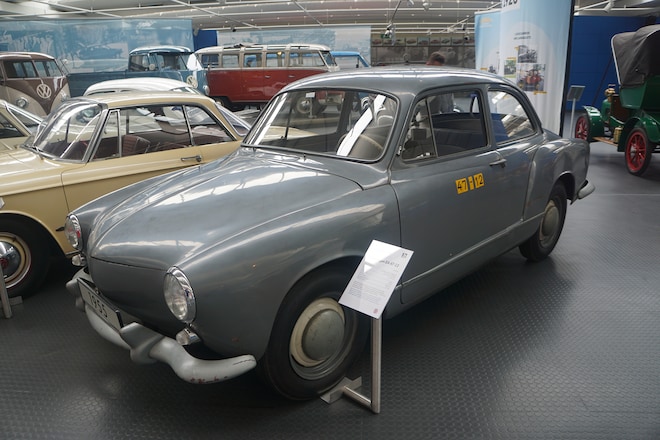 Throughout the 1950s, Volkswagen was looking to move away from the Beetle. The EA47-12 was the twelfth of 15 prototypes produced by Turin coachbuilder Ghia. This prototype featured a transverse-link front axle, torsion-bar rear suspension, and a fully-synchronized transmission. The AutoMuseum has EA47-12 displayed with its collection of Karmann-Ghias, which would adopt many of the prototype’s design cues. 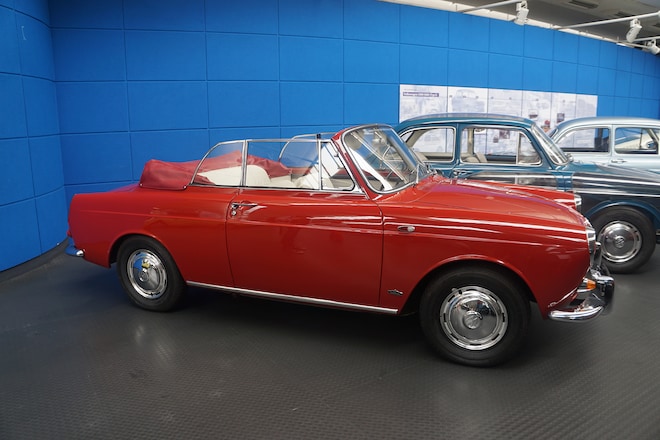 Volkswagen produced 16 hand-built prototypes of a Type 3 cabriolet, and the AutoMuseum has one of the two survivors. The car was unveiled at the 1961 Frankfurt Auto Show but was never put into production. The folding convertible top featured a glass rear window. 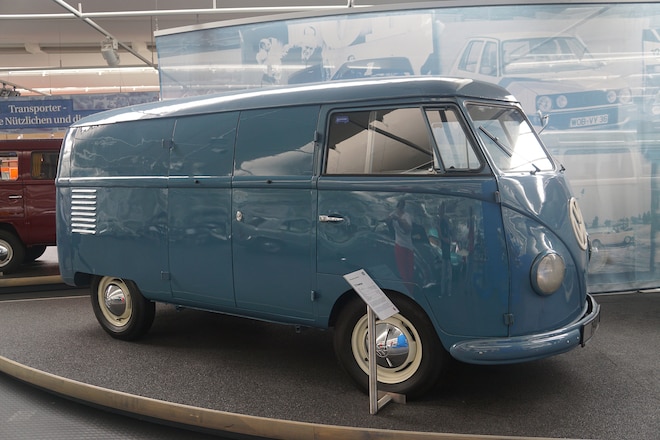 Perhaps the most famous prototype in the AutoMuseum is the T1, prototype for the Type 2 Transporter. Dutch Volkswagen importer Ben Pon is credited with the idea for, and first sketch of, a Volkswagen-based van, and this is the prototype that was revealed to the press on November 11th, 1949. 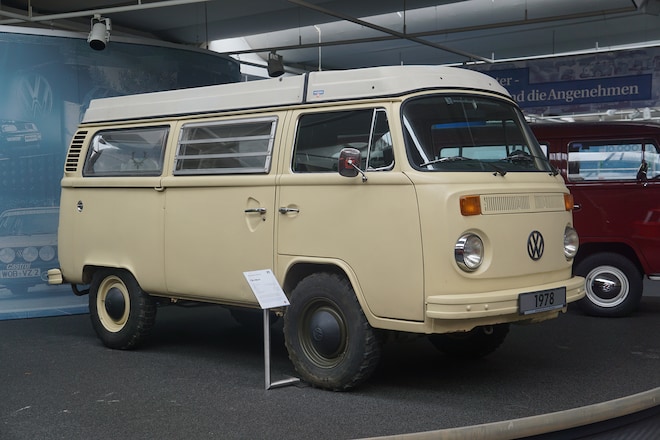 Volkswagen’s four-wheel-drive Vanagon Syncro is legendary for both its obscurity and its incredible off-road ability. Five prototypes were built from second-generation Transporters in 1978, and this is the only survivor—and if that wasn’t enough, it’s also a Westfalia camper. Volkswagen would not put the four-wheel-drive Transporter into production until the all-new T3 model arrived in 1979. 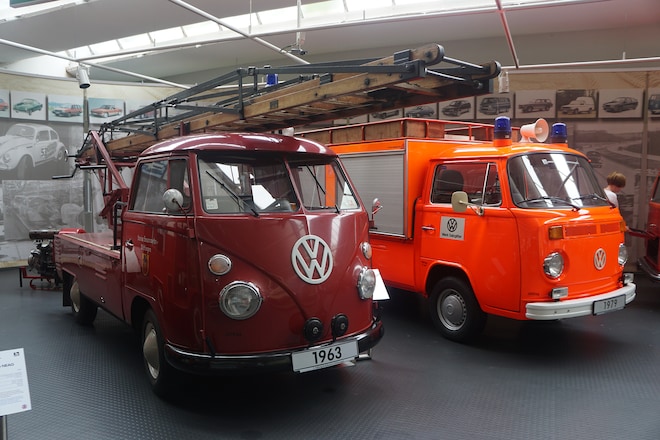 The idea of relying on a Volkswagen van for emergency assistance seems a bit dicey (we’d be worried about the house burning to the ground before the firefighters got to the scene), but the custom-made ladder truck on the left really did serve with the Wittengen fire department from 1963 until the 1980s. 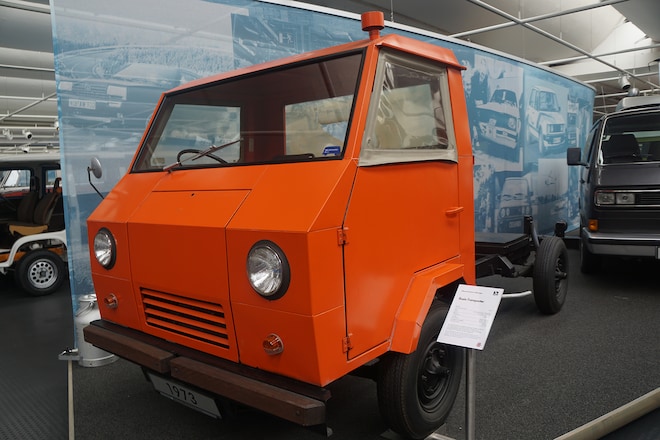 This is the prototype for the Basis-Transporter, a bare-bones utility vehicle designed for developing markets. It used the Beetle powertrain, but the engine and transmission were located under the cab and drove the front wheels. Volkswagen produced knock-down kits in Germany and built completed vehicles in Mexico between 1975 and 1979, but the design was not a success, and only 6,200 were built. 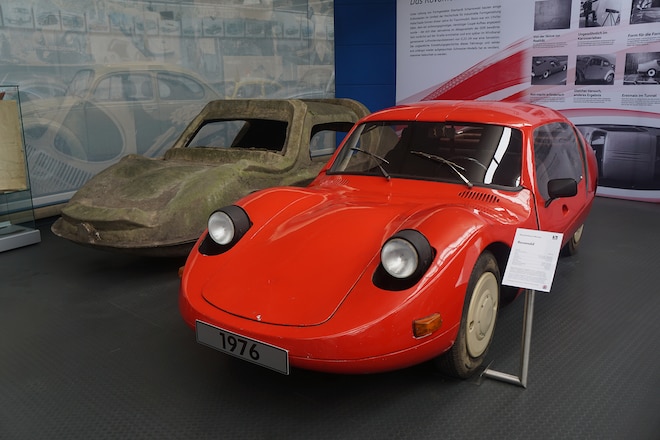 The AutoMuseum is home to several Volkswagen-based oddities including this East German creation, the 1976 Rovomobil. Based on a Volkswagen chassis, it has a fiberglass body with a drag coefficient of just 0.23, an impressive number even by today’s standards. The Rovomobil was never put into production and only two examples are known to exist. The AutoMuseum has the original car as well as the mold for the body. 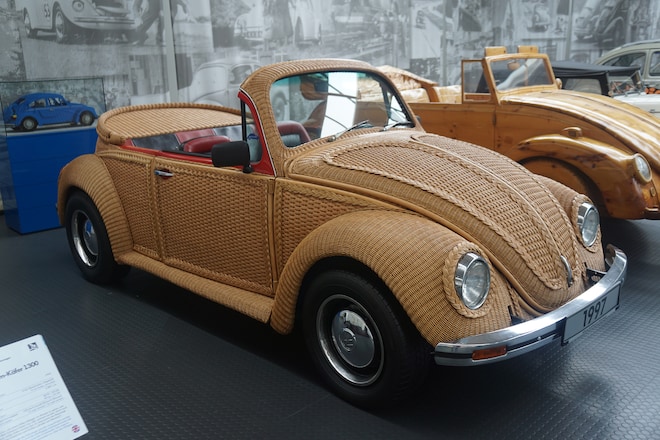 What’s that? You say your life won’t be complete until you see a Beetle Cabrio covered in wicker? Good news—the AutoMuseum has you covered! This wicker Beetle was built by German basketmaker Thomas Heinrich, and it is parked with other Type 1-based oddities, including a wooden Beetle, a Gazelle, and a Mexican wedding Beetle with a see-through body made from wrought iron. 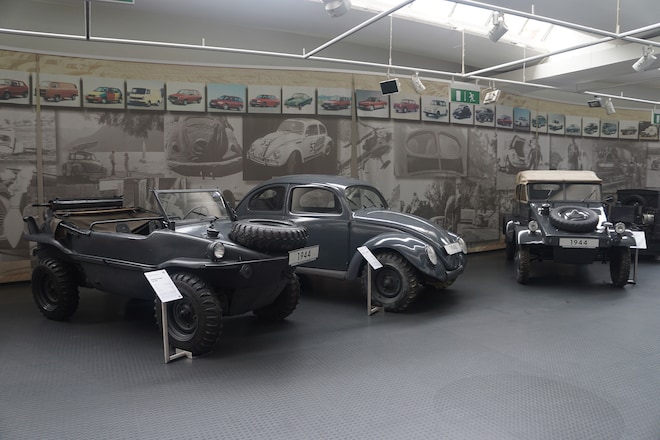 The AutoMuseum doesn’t gloss over Volkswagen’s World War II roots. The collection includes an amphibious Type 186 Shwimmwagen (left) and a Type 82 Kübelwagon (right). Between them is a Type 87 Kommanderswagon, a four-wheel-drive version of the Beetle. Though most were built during the war, the museum’s Kommanderswagon is one of two assembled in 1946. 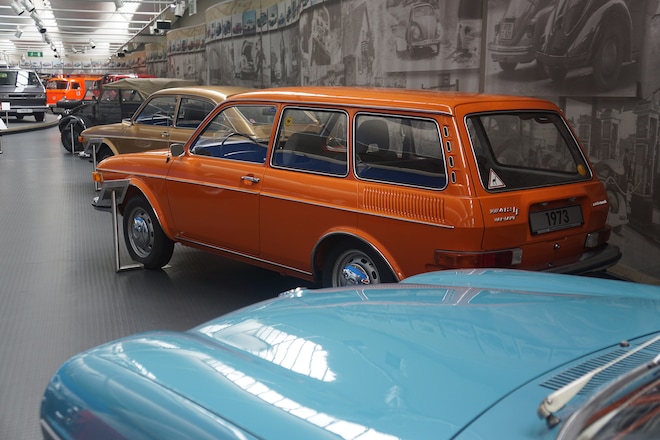 Even the unloved cars get a little love at the AutoMuseum, which features this pristine example of the 412 Variant, an updated version of the Type 4 (411) introduced in 1972. The photo was taken over the hood of the 1966 EA142, a prototype of the Type 4 that was developed just as the Type 3 Fastback and Squareback were going on sale in the United States. 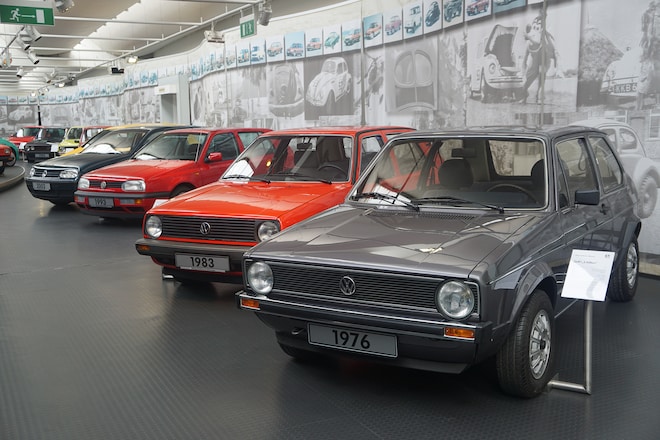 Lest you think only air-cooled Volkswagens are represented, there are also plenty of modern vehicles. Here we see a neat line-up of the first through fourth generation Golfs, with GTIs parked just beyond them. 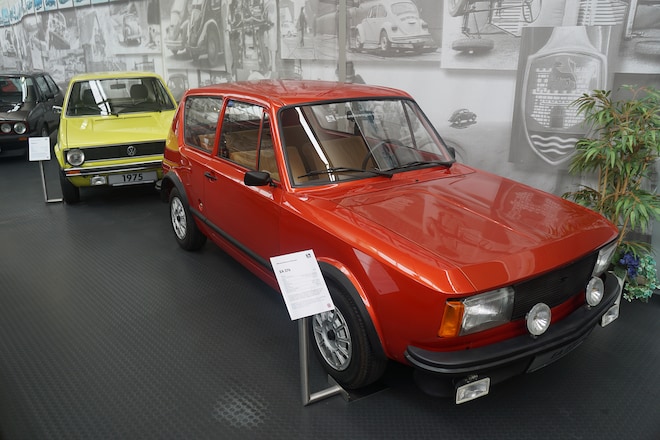 The EA276 of 1969 was an early prototype for what would eventually become the Volkswagen Golf. This prototype presaged the general shape and front-wheel-drive layout of the Golf, but its engine was the air-cooled boxer four from the Beetle. Volkswagen would later adapt the concept of a front-mounted air-cooled engine in the Brazilian-market Gol (yep, that’s how it’s spelled) of 1980. 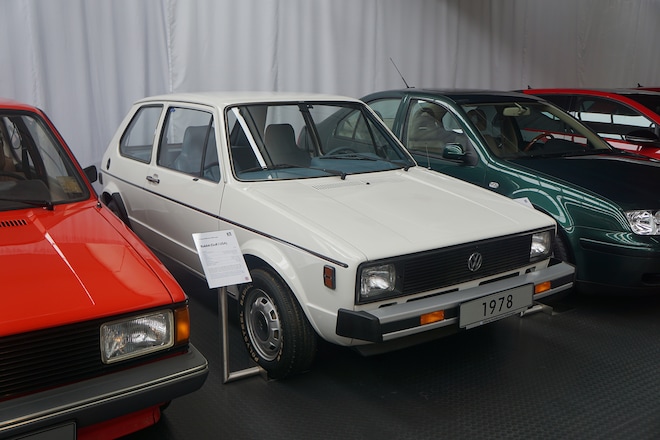 The AutoMuseum has a US-spec 1978 Volkswagen Rabbit on display, in all its square-headlight and stick-on- wood-interior-trim glory. 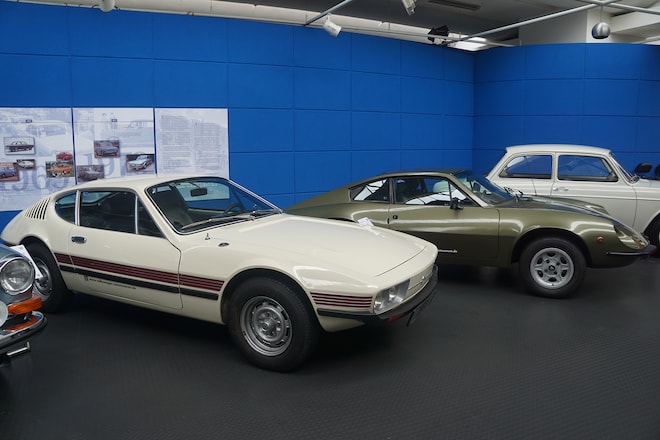 Volkswagen do Brasil PS2 and Puma

Volkswagen of Brazil is almost a world unto itself. Thanks to high import tariffs, Brazil is home to several home-grown Volkswagen models not sold (and rarely seen) elsewhere in the world. The white car is a Volkswagen SP2 (pronounced “Espeedios”), and it featured a 1.7 liter air-cooled Boxer out back. Next to it is its chief rival, the Puma GT, which used the 1500-cc drivetrain from the Volkswagen Karmann-Ghia. 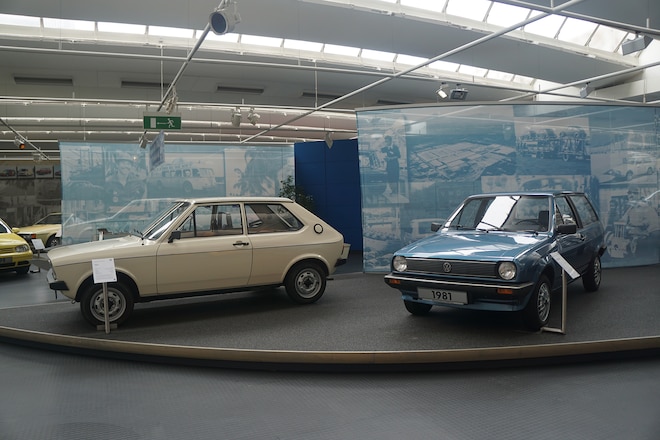 One of VW’s more popular European models, virtually unknown in the States, is the subcompact Polo. The AutoMuseum has several pristine examples. That’s a first-generation 1976 Polo on the left and a 1981 second-gen car on the right. The Passat/Santana and Sirocco are also well represented, and the museum is home to several of Volkswagen later-model prototypes and concept cars. 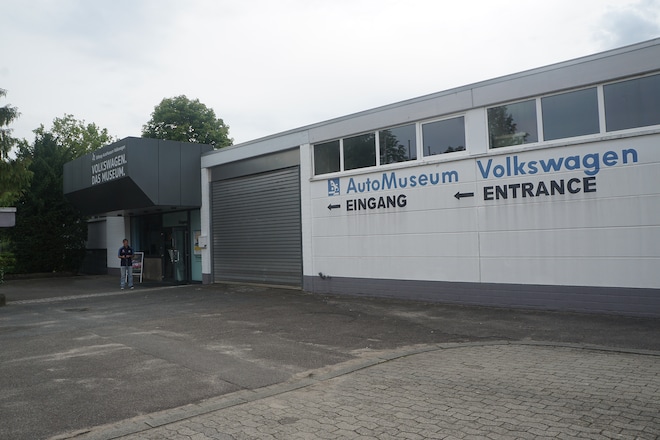 The Volkswagen Automuseum (known in German as the Stiftung AutoMuseum) is located at Dieselstraβe 35 in Wolfsburg, within walking distance from the Autostadt. The museum is open Tuesday through Sunday from 10:00am until 5:00pm, and is closed between Christmas Eve and New Year’s Day. Admission is €6 with discounts for families and groups. Group tours cost €40. Most of the signs are in German, but the guides speak English, so a tour is a wise investment. For more information, visit AutoMuseum.