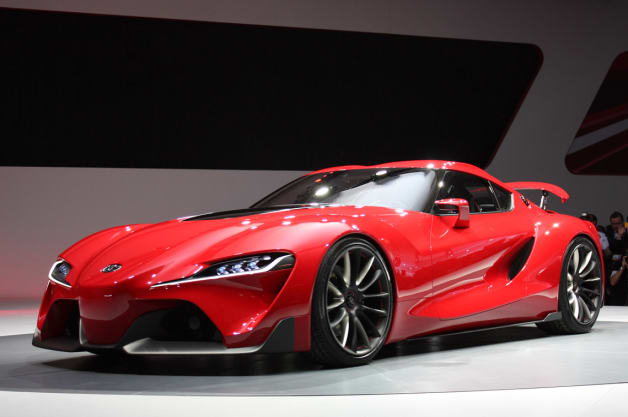 Sales of salt are skyrocketing following the latest rumor of the planned joint-venture sports car from Toyota and BMW. The whisperings indicate that project will spawn both a replacement for the BMW Z4 and a long-awaited Toyota Supra successor based on the FT-1 Concept shown above. Word is that the new cars will feature front-engine, all-wheel-drive layouts with plug-in hybrid technology. This news would appear to run somewhat counter to earlier reports that BMW and Toyota are teaming for a six-figure hybrid supercar.

According to Autocar, the project will benefit from the experience Toyota gained with the TS030, its hybridized Le Mans prototype. The evidence for this is, of all things, a Toyota Yaris – in particular, the Yaris Hybrid R that was shown at the 2013 Frankfurt Motor Show last September. That car used a 300-horsepower, 1.6-liter gas engine, while a pair of 60-horsepower electric motors provided all-wheel-drive push (an additional motor also sent additional juice to the front axle). The 414-system-horsepower drivetrain used supercapacitors in place of the traditional lithium-ion batteries of traditional hybrids.

For the production sports cars, Autocar claims that the Yaris Hybrid R’s setup will serve as the basis for the new powertrain, although it won’t be a direct carryover. Instead, a 2.0-liter BMW engine will be paired with Toyota-designed, BMW-built motors.

While Toyota will be responsible for making the new car go, BMW will handle the car’s structure and body. Carbon-fiber reinforced plastic, high-strength steel and aluminum will all play major roles in the construction, according to AC, with a low curb weight being a high priority.

This all sounds rather far-fetched to us, largely because of the existence of the BMW i8. That car already generates 362 system horsepower and 420 pound-feet of torque from a plug-in drivetrain, and it also benefits from extensive use of CFRP and aluminum. Finally, the i8 retails for six figures. Building the Z4 replacement that Autocar describes and keeping it around the current car’s price simply doesn’t seem possible. Besides that, the idea of an all-wheel-drive Z4 kind of runs counter to what the Z4 is, an old-school, cab-backwards rear-drive roadster.

Then again, this crazy industry has surprised us before. What do you think? Does any of Autocar‘s theory on the BMW-Toyota partnership make sense to you? What sort of car do you expect from the two companies? What would you hope to see in a Z4 replacement? Have your say in Comments.