The latest brake defect is found in some models of Toyota’s Crown Majesta, as well as the Noah and Voxy models produced between June 2007 and 2012.

Toyota told the BBC it was not aware of any crashes, injuries or fatalities caused by this defect.

The firm has refused to comment on how much the latest recall will cost it.

In an email to the BBC, the carmaker offered a breakdown of its recall into three separate issues.

Toyota said approximately 802,000 vehicles globally had a faulty brake system, which could crack and result in the brake fluid leaking.

This recall affects the Crown Majesta, Crown, Noah and Voxy models produced between June 2007 and June 2012.

Toyota will replace a rubber seal ring in the brake master cylinder to prevent brake fluid from leaking. If brake fluid has already leaked, the brake booster will be replaced.

In another set of recalls announced at the same time, Toyota said 759,000 vehicles globally had a faulty fuel delivery pipe system which could result in a leak and increased the risk of the vehicle catching fire.

This fuel delivery pipe problem affects about 423,000 vehicles in the US, 240,000 cars in Japan and nearly 70,000 vehicles in Europe and the Middle East combined, including 9,637 UK-registered cars. 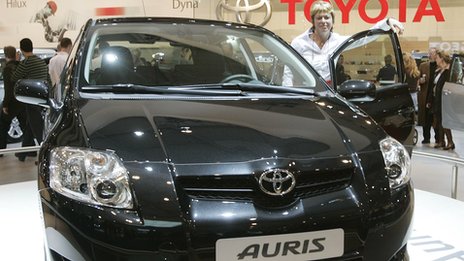 Toyota also disclosed that approximately 190,000 vehicles had faulty fuel suction plates in them, which could lead to a fuel leak and increase the risk of the cars catching fire.

This recall affects only vehicles in Japan, specifically the Corolla Rumion and Auris models manufactured between October 2006 and October 2014.

Last month, Toyota recalled 690,000 Tacoma pickup trucks in the US because of a potential vulnerability in the vehicles’ suspension systems.

Earlier this year in April, Toyota issued a recall of 6.4 million cars worldwide because of several issues, including problems with the airbag cable and windscreen wiper motors not working properly.

The latest recalls came to light after the close of trade on the Tokyo Stock Exchange. Before the news, Toyota shares closed up by 0.2% at 5,990 yen (£35) apiece.