U.S. Rep. Michael Grimm of New York City plan to plead guilty to the Federal Tax Evasion charge instead of going to trial next month. A hearing is scheduled for Tuesday in the federal court of Brooklyn. The Republican from State Island is believed to enter a plea in a case stemming from an investigation of his campaign financing.

Representative Michael G. Grimm, a Republican did not have any problem and was easily re-elected for a third term in Congress last month. Michael was re-elected in spite of a pending federal indictment.

Michael is a former Marine and also an agent with the Federal Bureau of Investigation. He ran for the office with his image as a law and order corruption fighter and is listed to appear in the Federal Court in Brooklyn on Tuesday for a plea hearing. The trial is scheduled to start on February 2nd.

Federal prosecutors and Lawyers for Michael have maintained a silence on the pending plea deal. However Associated Press quoting reliable sources said that the Republican from State Island planned to plead guilty to a single count of helping in filing false tax returns as a chance to avoid prison if pronounced guilty. 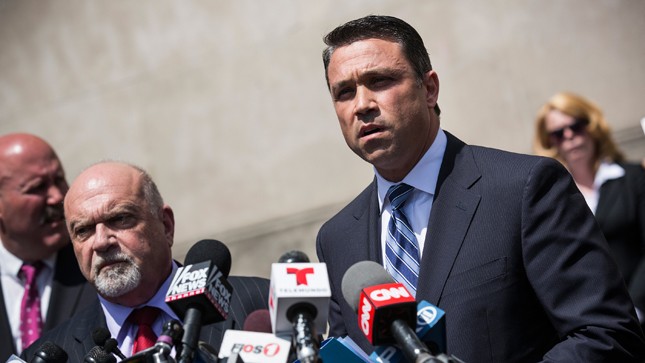 Grimm is charged with tax fraud which began in 2007, when he retired from the FBI and started investing in a Manhattan eatery known as Healthalicious. Grimm is charged with underreporting more than $1 million in wages and receipts to dodge payroll, income and sales taxes, in part by paying immigrant workers, some of them in the country illegally, in cash.

Grimm is free today on a $400,000 bond and won his re-election while fighting the charges. It is not clear if he will be allowed to keep his seat if pronounced guilty. Grimm was asked at an October debate if he would resign if found guilty this is what he had to say-

“Certainly, if I was not able to serve, then of course I would step aside and there would be a special election.”