(CNN)The governor of Virginia has ordered an investigation after a black student at the University of Virginia was injured during an arrest early Wednesday.

The university’s Black Student Alliance distributed a photograph, showing what it said was Martese Johnson, 20, during his arrest. Blood splatters his shirt and covers his face.

Video from the incident shows Johnson pinned to the ground, screaming: “I go to UVA! … You f****** racists! What the f***? How did this happen?”

An officer can be heard telling the student to stop fighting.

On Wednesday night, hundreds of students rallied in support of Johnson. And Johnson himself took the microphone.

“Regardless of your personal opinions and the way you feel about subjects … please respect everyone here,” he said. “We are one community. We deserve to respect each other, especially in times like this.”

“Today, we are reminded of the gruesome reality that we are not immune to injustice; as University students, we are not impervious to the brutality that has reeled on news cycles around the country,” the group said.

“We have marched and shouted that we are Trayvon Martin and Michael Brown, but the proximity of this morning’s brutality to a member of our community has deepened that wound. It is no longer happening only on national television — it is a reality here and now at the University of Virginia that we must face as a collective,” it said.

People are also speaking out on Twitter where #JusticeForMartese was trending Wednesday evening. The student’s name had 16,000 mentions on Twitter in the past 24 hours.

According to the Virginia Department of Alcoholic Beverage Control (ABC), uniformed ABC special agents arrested Johnson after he was refused entry to a licensed establishment and questioned.

He was charged with public intoxication and obstruction of justice, ABC said in a statement, adding that Johnson was treated for his injuries at a local hospital and released.

In a separate statement, Virginia Gov. Terry McAuliffe said that he has asked the Secretary of Public Safety to open an independent Virginia State Police investigation into the use of force.

The special agents involved in the incident will be restricted to administrative duties, pending the results of the investigation.

Johnson is a third-year student double majoring in Italian and media studies. He has no criminal record, according to his attorney, and holds a variety of leadership positions on campus. 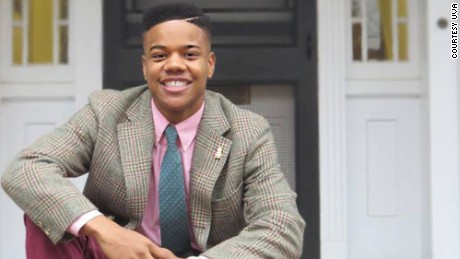 “As evidenced by both his academic and extracurricular achievements, Martese is a smart young man with a bright future,” attorney Daniel P. Watkins said. “I have spoken with him several times today, and he is absolutely devastated by yesterday’s events. Currently, we are preparing to investigate and defend this matter vigorously.”

The president of the University of Virginia urged anyone who witnessed the arrest, or who has information about it, to contact authorities.

“We have not yet clarified all of the details surrounding this event, but we are seeking to do so as quickly as possible,” said Teresa A. Sullivan.

“Today, as U.Va. students, faculty, and staff who share a set of deeply held values, we stand unified in our commitment to seeking the truth about this incident. And we stand united in our belief that equal treatment and equal justice are among our fundamental rights under the law.”