on Monday, seeking billions of dollars in penalties in the wake of an emissions-cheating crisis at the German auto maker.

The civil lawsuit, filed in federal court in Detroit, reaffirms allegations environmental regulators made last year that Volkswagen installed “defeat” devices to dupe emissions tests in 580,000 diesel-powered vehicles sold in the U.S. It significantly ramps up pressure on the company by putting the case before a federal judge and formally seeking court-ordered penalties.

The suit, filed by the Justice Department on behalf of the Environmental Protection Agency, seeks sanctions that could total more than $18 billion. Whether Volkswagen ultimately faces such a large penalty would be up to the judge.

While expected, the suit sent Volkswagen shares lower early Tuesday, trading down 4.0% at €121.30 each.

“The market reaction this morning is likely to be significantly negative given the outsize headline amounts,” ING said in a research note. “We [previously] assumed around €12 billion ($13 billion) in fines, we are not convinced yet that the number will be significantly above this when a final settlement is reached.”

ING analysts said they expect Volkswagen will seek to settle the matter out of court.

The car maker stressed Monday that it is working to ensure its vehicles will now meet legal standards. “Volkswagen will continue to work cooperatively with the EPA on developing remedies to bring the…vehicles into full compliance with regulations as soon as possible,” the company said in a statement.

The suit isn’t likely to be the final step in the U.S. government’s pursuit of Volkswagen, but rather could mark an opening move that paves the way for other actions. Monday’s legal action doesn’t involve criminal charges against Volkswagen or its executives, and federal prosecutors are in the midst of a separate criminal probe of the auto maker.

Volkswagen has held discussions with the EPA over how to fix the cars, but officials said those talks haven’t resulted in a deal, setting the stage for the new lawsuit.

“Recall discussions with the company have not produced an acceptable way forward,” said Cynthia Giles, the EPA’s assistant administrator for enforcement. “With today’s filing, we take an important step…setting us on a path to resolution.”

Experts said the lawsuit was an aggressive government effort to put auto makers on notice about defeat devices. “I think that is really meant to send a signal to the auto industry generally, but to VW specifically, that this kind of behavior will not be tolerated,” said Carl Tobias, a product liability law professor at the University of Richmond.

The suit is the latest in the flurry of legal actions world-wide enveloping Volkswagen, which admitted last year to using devices on diesel-powered cars that can cheat emissions tests in the U.S.

Volkswagen faces myriad lawsuits from consumers and dealers, as well as regulatory investigations in the U.S., Europe and elsewhere. The company has halted sales of affected vehicles in the U.S. and said it is cooperating with the probes.

The scandal cost former Chief Executive Martin Winterkorn his job and prompted Volkswagen to tap law firm Jones Day to investigate the auto maker’s emissions lapses. Volkswagen said in December the investigation so far pointed to a “chain of mistakes” leading to the cheating, starting with a diesel push in the U.S. in 2005, and a “culture of tolerance” for rule-breaking that allowed the deception to continue. 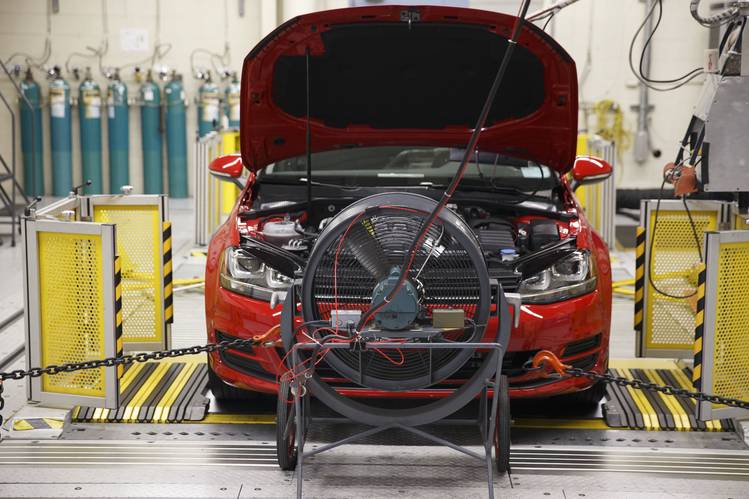 The Justice Department said it would seek to move the suit filed Monday to a federal court in California, suggesting it could be consolidated with related cases. That litigation includes scores of lawsuits by owners of diesel-powered vehicles—who in some cases spent $6,000 more than they would have for a gasoline-fueled model—seeking compensation for their car’s declining resale value.

The government’s lawsuit alleges that Volkswagen violated the Clean Air Act by making and selling vehicles that were designed differently from Volkswagen’s assertions in applications for certification to the EPA and the California Air Resources Board.

The complaint accuses Volkswagen of obstructing efforts by the government to “learn the truth about the emissions exceedances and other irregularities.” Volkswagen and Audi, the company’s luxury unit, made material omissions and provided misleading information, concealing facts that would have revealed the defeat devices, the lawsuit says.

Monday’s lawsuit is part of a civil case, but prosecutors are also investigating Volkswagen for potential criminal charges. Barbara McQuade, the U.S. attorney in Detroit, said Monday’s complaint marks only the “first stage” of the government’s efforts.

Write to Aruna Viswanatha at Aruna.Viswanatha@wsj.com and Mike Spector at mike.spector@wsj.com