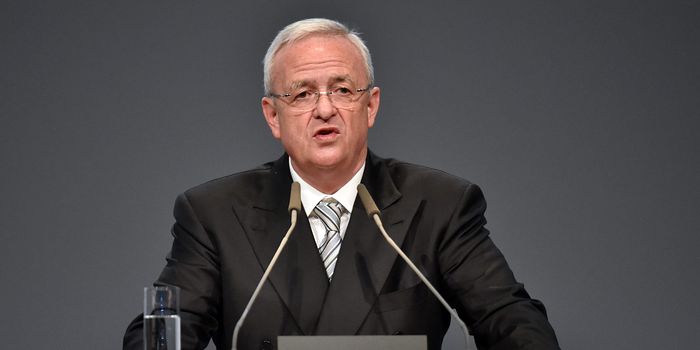 
said Sunday that it had commissioned an external investigation into allegations by the U.S. Environmental Protection Agency that the German car maker deliberately manipulated nearly half a million cars sold since 2008 to get around U.S. air-pollution rules.

The EPA’s move is a further step in an Obama administration crackdown on auto makers suspected of flouting regulations intended to reduce tailpipe emissions and comes at a critical time for Volkswagen, which is struggling to reinvigorate its flagging U.S. business.

On Friday, the EPA unveiled the allegations with the California Air Resources Board, alleging that Volkswagen used software, dubbed a “defeat device,” in the cars to make diesel-powered engines appear to have lower levels of emissions than they actually do. About 482,000 Volkswagen diesel-powered cars are affected.

“I personally am deeply sorry that we have broken the trust of our customers and the public,” Volkswagen Chief Executive Martin Winterkorn said in a statement issued by the company on Sunday, adding that Volkswagen is cooperating with authorities and has ordered an external investigation.

“We will cooperate fully with the responsible agencies, with transparency and urgency, to clearly, openly and completely establish all of the facts of this case,” Mr. Winterkorn said.

An EPA spokeswoman said the agency will be developing protocols to more efficiently screen for defeat devices.

U.S. officials said Volkswagen violated two parts of the federal Clean Air Act and could face sizable financial penalties of up to $37,500 per car, or more than $18 billion. It remained unclear whether the government would seek such an onerous penalty. The EPA in November 2014 hit South Korean auto makers Hyundai Motor Co. and Kia Motors Corp. with a record $100 million penalty for overstating fuel-economy claims and forced the companies to cough up another $200 million in regulatory credits.

No recall of the Volkswagen cars is currently under way, and the agency said the vehicles remain safe and legal to drive. Volkswagen might have to recall the cars and fix them, officials said, though that could take up to a year. The EPA is working with the Justice Department and an investigation is continuing.

The auto maker, Europe’s largest by sales, said in a statement that it “is cooperating with the investigation,” but declined further comment.

Officials alleged that Volkswagen used software that activates full emissions controls only during testing but then reduces their effectiveness during normal driving. The result is that cars can emit nitrogen oxides at up to 40 times the allowable standard, the agency said. Diesel-powered cars are a small part of overall U.S. car and light-truck sales.

”Using a defeat device in cars to evade clean-air standards is illegal and a threat to public health,” said Cynthia Giles, assistant administrator for the agency’s enforcement group. She later added: “These violations are very serious. We expected better from VW.”

Experts say that the software enables cars to get better fuel economy at the expense of higher nitrogen-oxide emissions, which was likely one reason VW was using them, according to Margo Oge, who recently retired as director of the EPA’s Office of Transportation and Air Quality after more than 32 years at the agency.

Volkswagen’s apparent motivations for fooling the emissions tests were unclear. An EPA spokeswoman said it would be “premature to speculate on why VW did this.”

A Volkswagen spokesman in Wolfsburg, Germany, said “We are now in the investigation phase and have no comment beyond what is in the statement that we published today.”

The cars include so-called clean-diesel vehicles marketed for impressive fuel economy without sacrificing driving performance. These cars have been a centerpiece of Volkswagen’s U.S. marketing efforts.

They include the Audi A3 and Volkswagen Jetta, Beetle, Golf and Passat with model years between 2009 and 2015. The vehicles have been sold in the U.S. since 2008.

The most well-known defeat-device case dates back to the late 1990s. The EPA and seven diesel-engine manufacturers, including Caterpillar Inc., Detroit Diesel and Cummins Inc., announced in 1998 a collective $1 billion settlement to resolve Clean Air Act violations similar to those the EPA alleged on Friday. Those companies faced $83.4 million of penalties under the law, at the time the largest U.S. environmental enforcement action in history.

The International Council on Clean Transportation, a nonprofit research organization that works with governments to cut air pollution from mobile sources, and West Virginia University researchers uncovered Volkswagen’s alleged use of defeat devices in research and testing over the last couple of years.

Drew Kodjak, executive director of the organization, said he doesn’t know of any other auto makers using such devices, but advances in technology may make it easier to use the software.

”Now that vehicles have electronic controls and are far more computerized than in the past, it is certainly possible that manufacturers can take advantage of this by installing defeat devices into their vehicles,” Mr. Kodjak said.

The publicized allegations against Volkswagen come amid an expansive push by the Obama administration to curb air pollution from an array of sources, including power plants, trucks and oil and natural-gas drilling. In August, President Barack Obama announced an EPA rule forcing power plants to cut carbon emissions. Earlier this summer, the EPA set new carbon rules for big trucks.

For auto makers, the EPA has coming emissions standards that require them to sell light vehicles averaging 54.5 miles a gallon by 2025.

”From an industry perspective it may set back diesel technology as a means for auto makers to reach the requirements for high fuel economy,” he said.

Auto makers are seizing on a coming 2017 review of the standards with regulators, including the National Highway Traffic Safety Administration, in the hopes of relaxing some requirements.

Consumer Reports, an influential magazine when it comes to car reviews, last week suspended its “recommended” ratings on the auto maker’s Jetta and Passat diesel-engine models after the EPA disclosed its allegations. Consumer Reports said the recommendations would remain suspended until it can retest the vehicles once they are repaired. The magazine said it would then assess whether the cars’ fuel economy worsened.

Falling gasoline prices have buyers flocking to gas-guzzling pickup trucks and sport-utility vehicles, and are calling into question whether car makers can meet the emissions and fuel-economy targets. Regulators so far have indicated they are reluctant to budge.

The scrutiny over emissions regulations adds to a broader unprecedented government pressuring of auto makers, including for safety transgressions. General Motors Co. admitted to criminal wrongdoing and agreed to pay a $900 million penalty in the mishandling of a defective ignition switch linked to more than 100 deaths in a settlement with the Justice Department unveiled Thursday.

The Justice Department also is probing safety-equipment maker Takata Corp. of Japan over rupture-prone air bags linked to eight deaths and more than 100 injuries that have forced auto makers to recall more than 19 million vehicles, among the largest such actions in history. Regulators, too, have been hitting auto makers with fines for safety lapses.

The emissions allegations come as Volkswagen already faces tough challenges in the U.S. Analysts say Volkswagen’s key U.S. vehicles are too expensive and out of step with consumer tastes. The brand’s sales are off 2.8% through August compared with the same period a year earlier, even as the wider market is sizzling. Industrywide sales are expected to eclipse 17 million light vehicles for the first time since 2001.

In recent years, Volkswagen has fallen behind auto makers it traditionally led in the U.S., including Fuji Heavy Industries Ltd. ‘s Subaru brand. The German auto maker spends among the highest amounts of money on sales incentives per vehicle sold, according to researcher Autodata Corp.

Volkswagen has been planning to unveil new products in coming years to stem share losses. On Monday, Volkswagen officials were planning to host media in New York for a Passat launch celebration. It is unclear now whether executives will keep to those plans.

—John D. Stoll and Sarah Sloat contributed to this article.