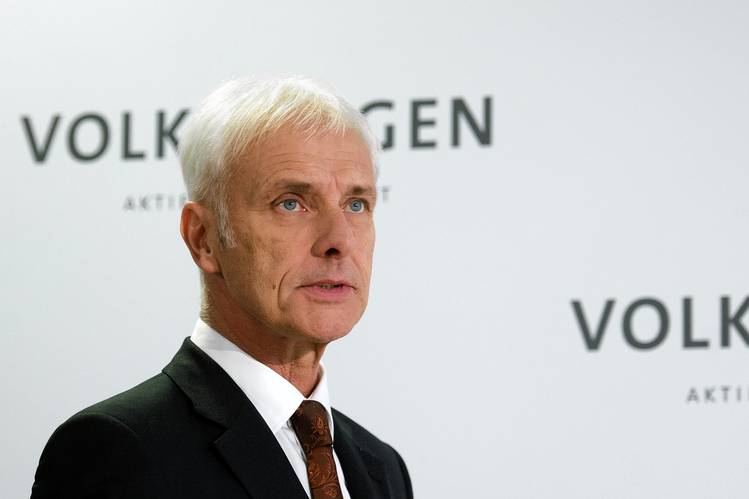 
said Sunday that its chief executive, chairman and top shareholders are in Qatar for talks with one of the company’s core investors, the Qatar Investment Authority, amid reports that the Qataris are calling for sweeping changes in the German car maker’s management.

Volkswagen is portraying the talks as a routine introductory visit by Chief Executive Matthias Müller and Supervisory Board Chairman Hans Dieter Pötsch, who assumed their posts in September.

They are joined by Wolfgang Porsche and Hans Michel Piëch, representatives of the Porsche-Piëch clan that controls Volkswagen, according to a person familiar with the matter.

“This is a normal introductory visit by the new management to one of the company’s most important partners, one of its most important shareholders,” Eric Felber, a Volkswagen spokesman, said.

Separately, Volkswagen confirmed that it has closed a deal for a €20 billion unsecured revolving credit facility with a consortium of 13 banks led by Citibank
C


Global Markets and UniCredit Bank. A person close to the German car maker said the company wanted to assure it had access to funds, but has no specific plans now to tap the financing.

Germany’s weekly Bild am Sonntag newspaper reported Sunday that Qatar is seeking to weaken the influence of the worker representatives on the board and in the company’s daily operations. Akbar Al Baker, CEO of Qatar Airways, and Hussain Ali Al-Abdulla, vice chairman of Qatar Holding LLC, represent Qatar on Volkswagen’s supervisory board.

Bild also said Qatar is calling on Volkswagen to push back against an erosion of demand for its diesel cars with a major initiative to push electric-powered cars in the U.S.

The sharp decline in Volkswagen’s share price since the emissions deception was disclosed on Sept. 18 has cost the company’s shareholders billions. Qatar holds about 17% of Volkswagen’s voting stock.

The Qatar Investment Authority didn’t immediately respond to a request for comment.

Under German law, which grants workers wide-ranging co-determination rights at major corporations, the labor representatives, including union functionaries, have half of the 20 seats on the company’s supervisory board. The works council, a body that represents workers inside the company but has no collective bargaining powers, has considerable influence over strategic decisions.

Volkswagen denied that the meeting with the Qataris was about labor issues.

“Neither the works council nor co-determination are on the agenda,” Mr. Felber said.

Volkswagen’s works council didn’t respond to a request for comment.

The talks in Qatar come amid growing frustration among Volkswagen’s outside shareholders with what is perceived as the slow pace of the company’s inquiry into who was responsible for years of deceiving environmental regulators about tailpipe emissions on its diesel-powered cars.

U.S. authorities in September disclosed that Volkswagen installed software on some diesel models of its cars in order to cheat on emissions testing. Volkswagen later admitted that nearly 11 million cars world-wide contained the software.

They and other investors have questioned whether veterans such as Mr. Müller and Mr. Pötsch are suited to change Volkswagen’s corporate culture to ensure that such a deception never repeats itself.

Until September, Mr. Müller was CEO of Porsche AG, the sports car maker owned by Volkswagen. Mr. Pötsch, a native Austrian with close ties to the Porsche-Piech clan, served as Volkswagen’s finance chief since 2002 until September, when he was appointed chairman in the wake of the emissions crisis.

—Robert Wall contributed to this article.