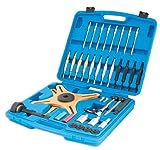 Volkswagen is recalling 8.5 million vehicles across Europe in light of the company’s ongoing diesel emissions scandal. The automaker hasn’t yet announced full details yet, but in a statement, Volkswagen said repairs “will begin in January 2016 — at no cost to our customers.” The recalled vehicles, including 2.4 million in Germany, contain “defeat devices” that optimize their engines to perform well during emissions testing. But out on the road, Volkswagen’s diesel cars have been spewing far more toxic emissions than regulations allow and are in violation of laws like the US Clean Air Act. Some 11 million cars worldwide are affected by the scandal, and Volkswagen faces enormous fines and lawsuits globally as a result.

On Thursday, Germany’s KBA automotive watchdog reportedly rejected Volkswagen’s initial suggestion of a voluntary recall. Volkswagen then expanded the mandatory recall to cover all of its diesel fleet across Europe. Volkswagen has until the end of November to present German regulators with a plan for fixing the mess it’s now embroiled in. In regards to a remedy for US Volkswagen owners, the company has said it’s working on a more extensive fix that will comply with stricter emissions standards. The Environmental Protection Agency expects to hear about one such fix next week, but wants to test it directly before formally ordering a recall.