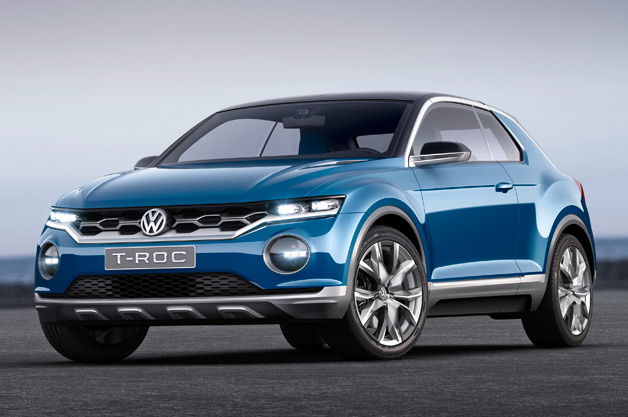 After being uncharacteristically flat-footed in reacting to the auto industry’s seemingly unquenchable demand for new crossovers, the Volkswagen brand is investigating a raft of new softroader models to build out its portfolio. At present, VW only offers its premium-minded Touareg and aging Tiguan, but more product is in the pipeline: the long-expected three-row CUV based on the CrossBlue Concept is expected to get a production home shortly, and the German automaker seems intent on marketing its Taigun subcompact in developing markets. If early language from Wolfsburg authorities is to be believed, we’ll shortly be able to add this new T-Roc Concept to the company’s slate of likelies, as well.

At its VW Group Night event in Switzerland ahead of the Geneva Motor Show, the people’s automaker rolled out its rakish T-Roc on its new MQB modular transverse matrix platform, underpinnings this showcar shares with the seventh-generation Golf. The blue, three-door concept, said to be a “step down” from the Tiguan, is powered by 2.0-liter TDI four-cylinder generating 182 horsepower and a useful 280 pound-feet of torque, with power routed through a seven-speed dual-clutch gearbox. However, in its presentation, VW was quick to note that the T-Roc could take advantage of any of the various powertrain configurations found in the Golf family, so theoretically that means gas, plug-in hybrid and pure electric versions are also possibilities.

Looking something like the VW version of Audi’s recent Allroad Shooting Brake showcar from the Detroit Auto Show, the T-Roc includes unique features like removable roof halves that store in the trunk along with cornering LED spotlights that help the front- and rear-mounted cameras cut through the darkness for night-time off-road maneuvers.

VW officials at the vehicle’s unveiling were remarkably candid about their hopes for the vehicle, saying, “We would like to build the T-Roc,” as it’s the “logical consequence of the Golf format.” While we’re not 100-percent sold on the ‘logic’ of coming to market with a three-door crossover, after looking over this one in person, we’d like to see the T-Roc get its shot at production.

VOLKSWAGEN GROUP EVENING IN GENEVA: WORLD PREMIERE OF THE T-ROC

Wolfsburg, 3 March 2014 – On the evening before the Geneva International Motor Show the Volkswagen Group traditionally presents its highlights. With the world première of the T-ROC concept car the Volkswagen brand is giving a preview of a possible SUV range. The striking features of the concept car include its progressive design, the front section with the LED headlights and two removable roof halves.

With the Tiguan and Touareg Volkswagen has in its model range two of the most successful SUVs (sports utility vehicles) of European origin. In the future, Germany’s largest car manufacturer will be expanding this spectrum appreciably with new models in a variety of classes. Coming up at the Geneva International Motor Show (4th to 16th March): the world première of the T-ROC, a Golf-format concept car positioned a step down from the Tiguan. Following the CrossBlue (USA), CrossBlue Coupé (China) and also Taigun (India) concept cars, Volkswagen is once again giving a look ahead to possible future SUV models.

The T-ROC follows a new design line and interior style, with the progressive design of the front section being particularly striking. The two-door vehicle also combines the talents of an all-wheel drive SUV – which doesn’t capitulate even when faced with rocky off-road tracks – with the summery airiness of a convertible. The middle section of the roof consists of two halves that with just a few flicks can be taken off and stowed in the boot. Front and rear cameras, which are backed up in the dark by LED headlights, extend the driver’s field of vision.

The vehicle body has been designed based on the Modular Transverse Matrix (MQB). Thanks to lightweight construction the SUV weighsjust 1,420 kg. Visually striking features include the relatively short overhangs and the multi-part 19-inch alloy wheels with size 245/45 tyres.