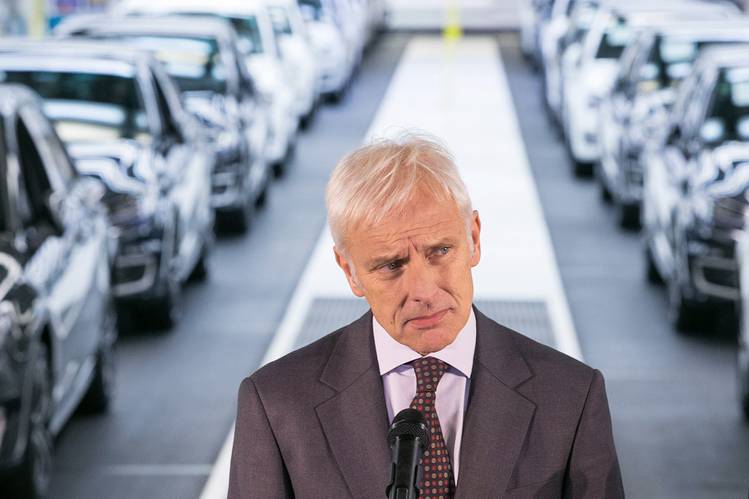 
’s world-wide sales shrank in November, hurt by steep declines in the U.S. and South America, illustrating the commercial impact of its emissions-cheating scandal.

Demand held up somewhat for its luxury Audi
NSU


brand, which Volkswagen increasingly depends on for profit, but even there growth slowed sharply last month compared with earlier this year.

“We are shouldering what is a very considerable challenge for the group,” said Chief Executive Matthias Müller.

The German auto maker’s overall sales fell to 833,700 vehicles in November, down 2.2% compared with the same month last year and a more pronounced decline than earlier this year. Deliveries fell 1.7% to 9.1 million vehicles in the first 11 months of the year compared with the same period in 2014. Its top-selling Volkswagen brand was under particular pressure, down 2.4% by units in November.

In the U.S., Volkswagen’s sales overall fell 15% in the second full month since the emission-cheating scandal broke despite overall buoyant demand for new cars which has put the U.S. market on course to challenge the 17.35 million sales peak reached in 2000. Volkswagen’s sales dropped 42% in South America. Sales in China and western Europe rose 5.5% and 2.6%, respectively, but weren’t enough to offset the declines elsewhere.

The latest evidence of the commercial strain Volkswagen is under comes after the auto maker on Thursday blamed its emissions crisis on a “chain of mistakes” that began with the company’s diesel push into the U.S. in 2005.

Top executives also cited a “culture of tolerance” for rule-breaking that allowed the deception to continue for a decade. They acknowledged that engineers introduced software that would lower emissions of nitrogen oxides in many of its diesel engines after realizing there was no legal way for those engines to meet tight U.S. emissions standards “within the required time frame and budget.”

“There wasn’t one single mistake, but rather a chain of errors that was never broken,” Chairman Hans Dieter Pötsch said on Thursday.

Volkswagen has replaced six executives since the beginning of the year and has switched leadership of seven of its dozen brands, which include Audi, other luxury marques Porsche and Bentley, as well as mass-market brands VW, Seat and Skoda.


as the world’s biggest seller of luxury cars, has so far fared better in the aftermath of the emissions crisis than the VW brand, Volkswagen’s biggest volume business.

“Sustained high demand for Audi models in Europe and our good global order situation continue to provide momentum for the months ahead,” said Audi sales and marketing executive Dietmar Voggenreiter.

In the U.S., Audi sales rose less than 1% in November, hit by a temporary halt to sales of some diesel models. Sales growth was particularly strong in Spain, Italy, Germany, Mexico and Brazil, Audi said.

Volkswagen’s deception was disclosed in September by the U.S. Environmental Protection Agency, which issued an official notice of violation saying that Volkswagen had installed a defeat device to circumvent emissions tests on about 500,000 diesel-powered cars in the U.S.

While offering few specifics, Mr. Müller and Mr. Pötsch on Thursday acknowledged that engineers introduced software that would lower emissions of nitrogen oxides in many of its diesel engines after realizing there was no legal way for those engines to meet tight U.S. emissions standards “within the required time frame and budget.”

Corrections & Amplifications:
Volkswagen’s Audi brand sales were 1.64 million in the first 11 months this year. An earlier version of this article incorrectly put the figure at 1.59 million (Dec. 11, 2015)

Write to Friedrich Geiger at friedrich.geiger@wsj.com