The very first thing Republicans will do in the 114th Congress is pass a bill to fast-track approval of the Keystone XL pipeline. President Obama will veto it. Republicans will vow to try again. And the pipeline fight will drag on, as it has for years.

But this time around, there’s a twist. Oil prices have been plummeting, with US crude going from $100 per barrel in June down to less than $50 today. The world is awash in cheap oil. And that’s led many people to ask: does the Keystone XL pipeline still matter at all?

In some ways, Keystone XL — which would carry crude from the oil sands of Alberta down to refineries on the Gulf Coast — still matters about as much as it ever did. The recent plunge in oil prices has made life a bit harder for Canada’s oil-sands industry, though only a bit so far. A few future expansion projects have been put on hold, but the industry is still producing plenty of oil and making plans to grow. (Oil-sands projects are basically big mining operations: once their steep upfront costs are paid, they can continue extracting oil at relatively low costs for decades.)

But even with low prices, Keystone XL is unlikely to make or break the oil sands one way or the other. “It still matters, but it’s not going to be black or white, where the industry either shuts down or the industry goes full speed ahead,” says Andrew Leach, an economist at the University of Alberta.

What falling oil prices could do, however, is shake up the politics of the pipeline. In recent weeks, President Obama has sounded far more skeptical about Keystone XL. And now that gasoline in the US is the cheapest it’s been in years, that could well give him cover to kill the project altogether.

The economics of Alberta’s oil sands — and Keystone XL 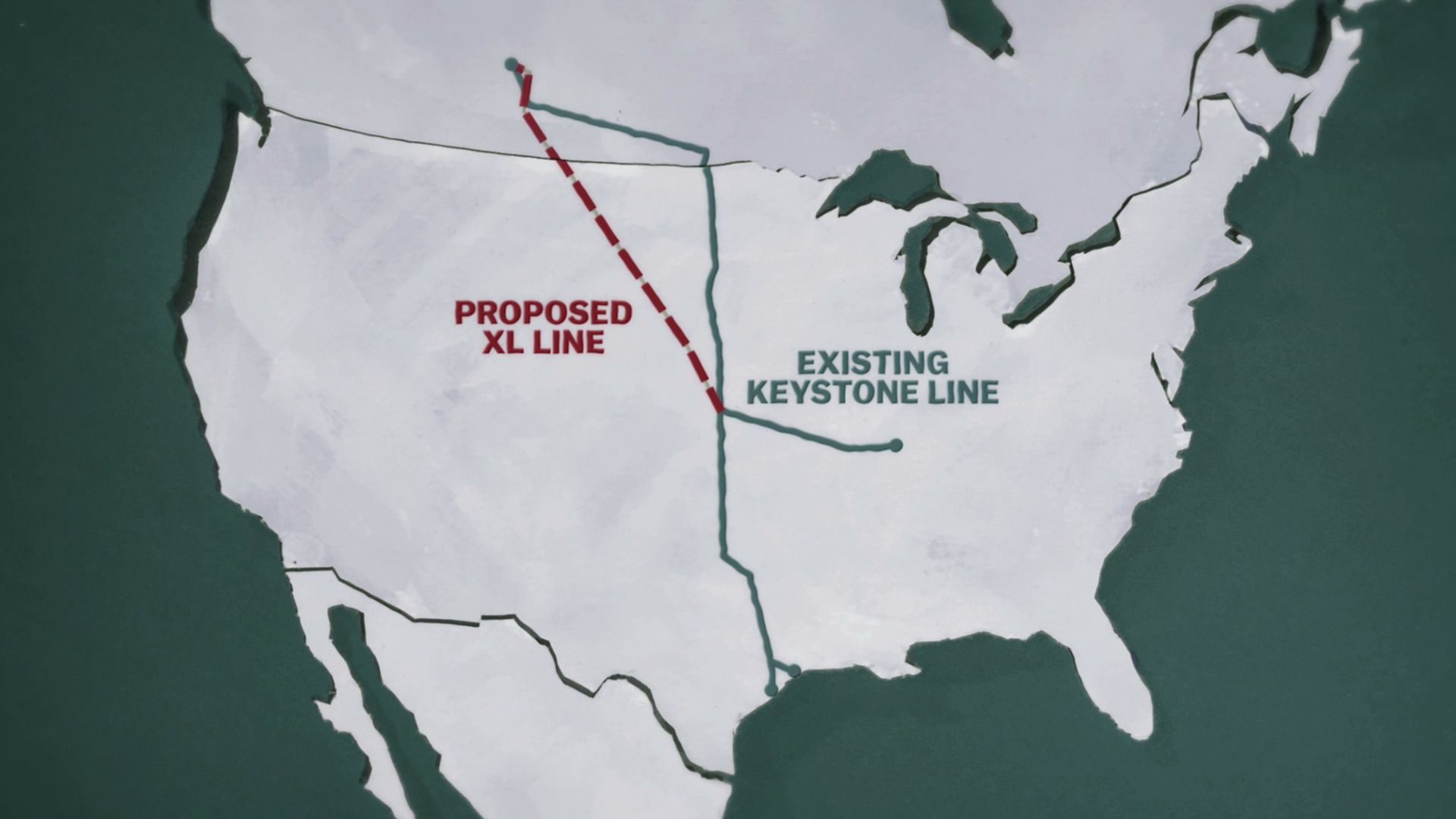 Recall the original logic behind Keystone XL. When oil prices rose sharply in the 2000s, companies found it profitable to extract oil from the tar sands of Alberta. This is an energy-intensive process: the sands have to be mined and heated with hot water and chemicals to extract bitumen, a gooey form of petroleum. But as long as oil was selling above $60, $80, $100 per barrel, it was worth it.

As oil-sands mining expanded, companies needed a way to get that bitumen to market. Keystone XL, first proposed in 2008, was meant to help with that: it would take 830,000 barrels per day from Alberta and North Dakota down to refineries on the Gulf Coast. Since the pipeline would cross the US-Canada border, the Obama administration had to approve it first.

In 2011, the pipeline caught the eye of environmentalists, who noticed that processing bitumen from the oil sands led to more greenhouse-gas emissions — and more global warming — than you got with regular oil. NASA climate scientist James Hansen warned that exploiting all of Canada’s vast oil sands would be “game over” for the climate. Activists pushed Obama to block the pipeline. Obama dithered. Republicans pounced. The debate was on. 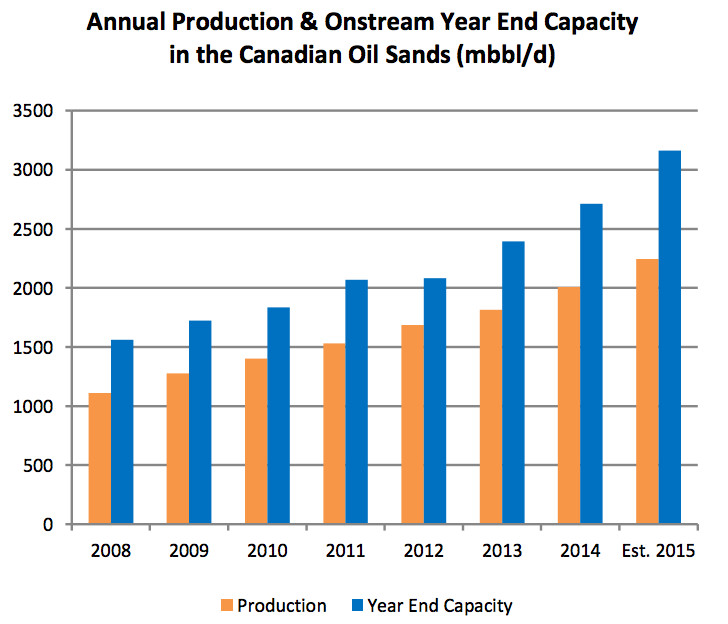 Note that estimate for 2015 is assuming that all projects planned to come online do. (Evaluate Energy)

Despite all this, some oil companies still wanted Keystone XL. After all, it’s cheaper to ship oil to the Gulf Coast by pipeline than by rail — a difference of $5 per barrel or more.

What’s more, if the oil sands kept growing indefinitely — in May, Alberta’s Energy Regulator was forecasting growth to 4.4 million barrels per day by 2023 — then companies would eventually hit infrastructure bottlenecks, especially by rail. (One analysis, by Maximilian Auffhammer of UC Berkeley, argued that blocking Keystone XL could force companies to leave up to 1 billion barrels underground by 2030.)

But for the past few years, at least, the Keystone XL delay hasn’t really stopped oil-sands production from growing. 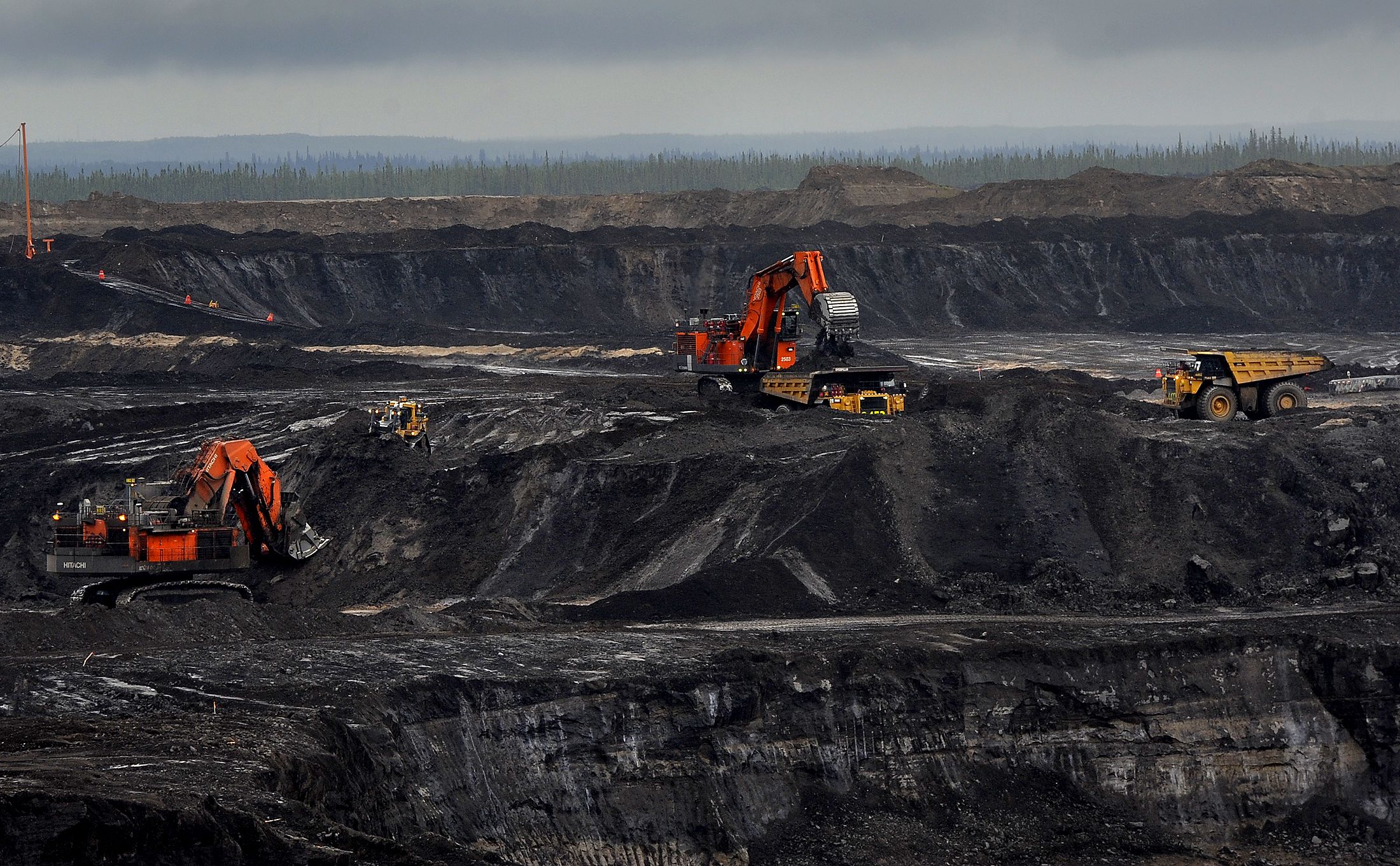 But now we’re in a world where oil prices are plunging below $50 per barrel. So far, that hasn’t severely crimped oil-sands production. The industry is still producing plenty of oil — and is still projected to expand again next year.

How can that be? One key insight here is that oil-sands production is very different from, say, fracking operations in North Dakota or Texas. With fracking, new wells tend to get depleted very rapidly, so companies constantly have to reinvest in drilling even more wells. When oil prices drop, activity tends to scale back fairly quickly (though there are complicating factors).

Oil sands projects are different. These are big mining operations that require very long-term planning. They often need a multibillion-dollar upfront investment, but can then operate relatively cheaply for decades after that. According to one estimate, mining projects that are already up and running can keep operating even if prices dip down to $45 per barrel. Newer in situ projects — where high-pressure steam is injected into boreholes — can operate at prices closer to $20 per barrel. For now, prices are above that.

Oil-sands companies have also been bolstered by a couple of less-noticed factors, says the University of Alberta’s Andrew Leach. The Canadian dollar has declined about 15 percent of late, making the country’s oil exports more competitive. The cost of natural gas has fallen, which helps oil-sands processors operate more cheaply. And the cost of diluent — which is mixed with the bitumen to ship it through pipelines — has fallen.

Where falling oil prices will really matter in Canada is in future investment and expansion. If companies expect oil prices to stay low for many years — below about $65 per barrel or so — then it’s probably not worth it to plow money into any more big new oil-sands operations.

But even here, Alberta hasn’t seen a dramatic impact yet. Back in September, Statoil said it would delay its Corner oil sands project. But there haven’t been any similar major announcements since. (Suncor may end up delaying its big Fort Hills project, which has been bedeviled by rising costs, though that hasn’t happened yet.) For the time being, oil-sands firms are moving forward with projects they were already working on.

“Even if everybody steps away from every project not materially advanced,” Leach estimates, “we could still see production grow for at least two years [due to projects already in motion]. After that, we’d likely see it flatten out.”

So does Keystone XL still matter? 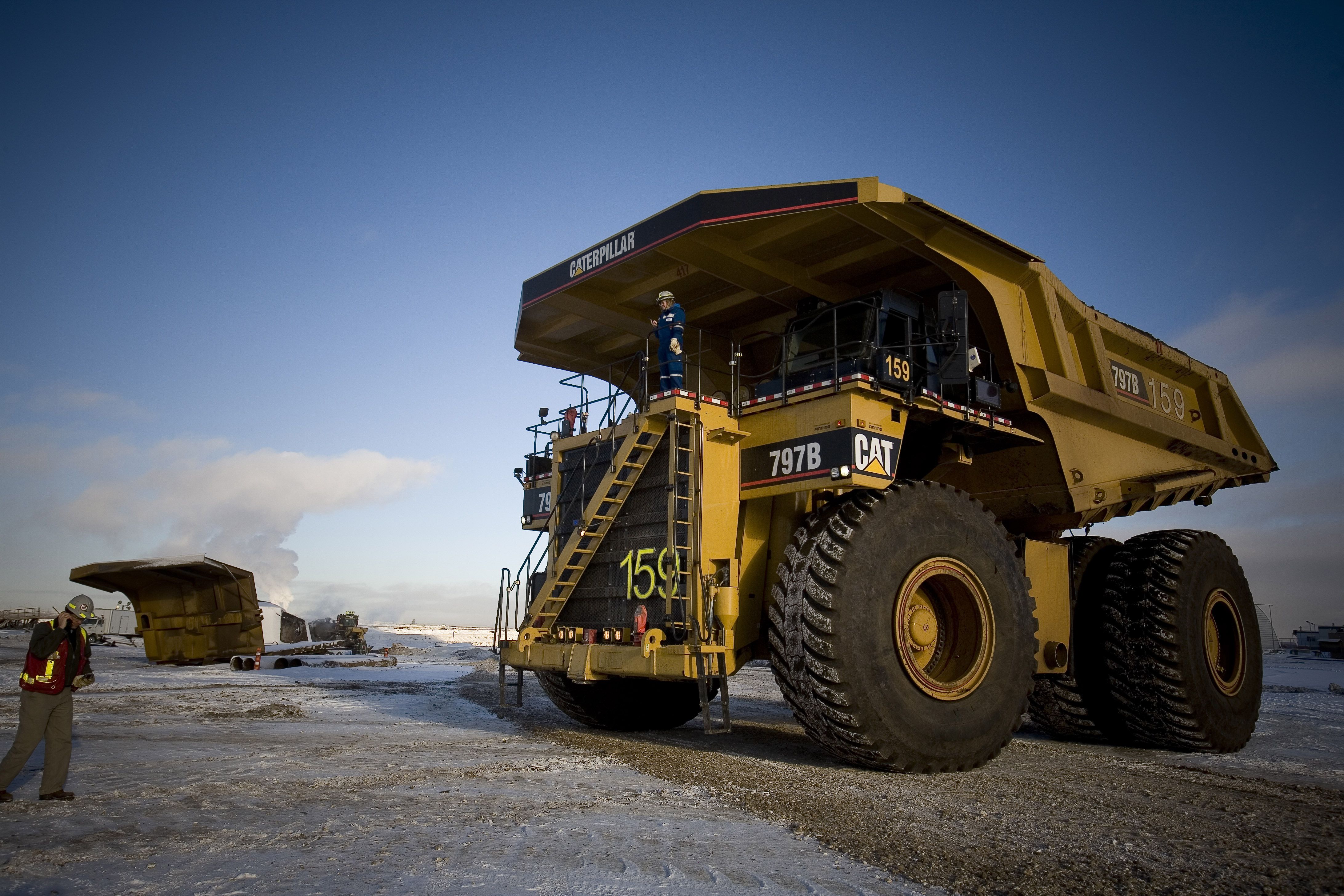 That brings us back to Keystone XL. And there are a couple ways to think about this.

On the one hand, it’s still marginally cheaper to ship oil by pipeline than it is to ship it by rail. So, all else being equal, blocking Keystone XL and forcing producers to ship by rail will hurt oil-sands producers at the margins. And, as a big State Department analysis pointed out, those extra transportation costs hurt more when oil sells for $50 per barrel than it is at $100 per barrel. So in that sense, Keystone XL matters as much as it ever did, maybe a bit more. (Though see Michael Levi for a much more thorough analysis of this point.)

But there’s another way to look at it, too: Right now, there are five major pipelines being proposed out of Alberta (in addition to what’s already there). There’s Keystone XL, there’s the Alberta Clipper to Wisconsin, the Transmountain and Northern Gateway to British Columbia, and Energy East, which would travel through Quebec.

Back in June, the Canadian Association of Petroleum Producers estimated that Canada would probably need all five of those pipelines, plus some rail expansion, to accommodate the most optimistic growth projections for oil (another 4.4 million barrels per day). So if you think oil-sands production can keep growing indefinitely, blocking Keystone XL would conceivably crimp that growth: 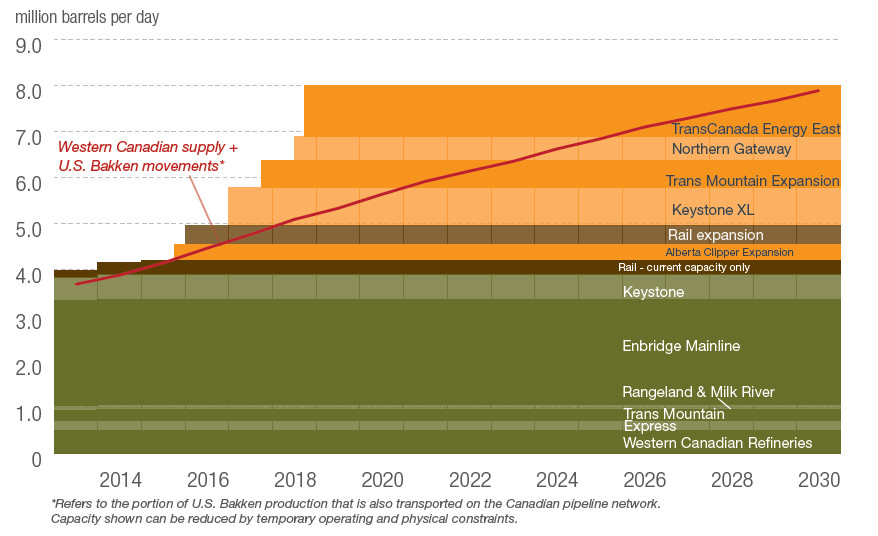 On the other hand, if you think oil prices are going to remain low for a long time, then oil-sands production probably won’t grow that rapidly. Maybe Canada will only add another 1.5 million barrels per day between now and 2030, instead of 4 million. In that case, it probably won’t need all those pipelines. (It’s worth noting that some of those other pipelines, like Energy East, are also facing opposition, and Keystone XL isn’t the only controversial one.)

So there are also scenarios where cheap oil could make Keystone somewhat less relevant overall. The unsatisfying answer is that so much depends on future oil prices — and those are incredibly hard to predict. 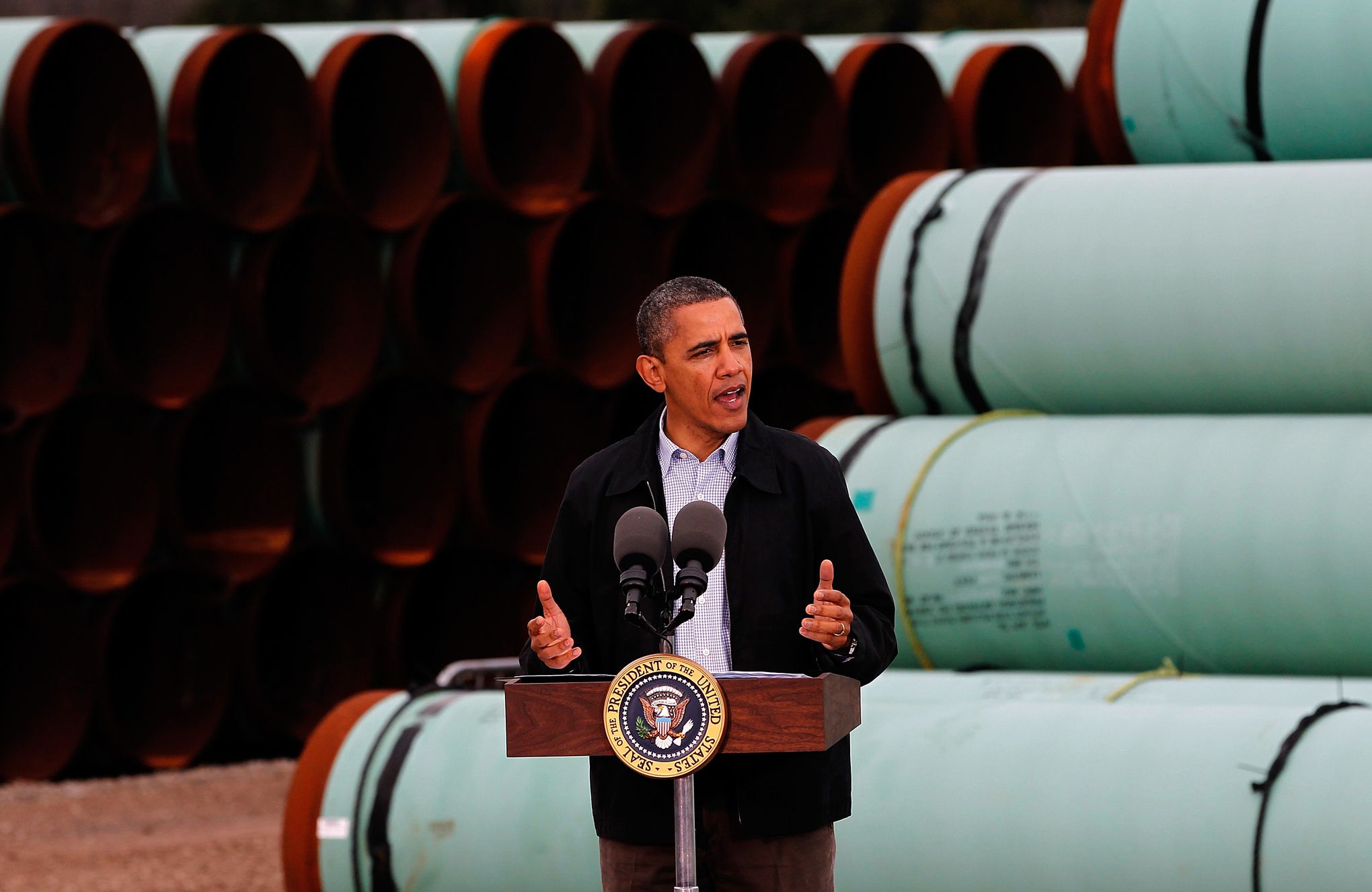 Where low oil prices might end up mattering most is in the political sphere.

In recent months, President Obama has sounded skeptical of Keystone XL. “We’ve got to make sure that it’s not adding to the problem of carbon and climate change,” Obama said about the pipeline in an interview with Stephen Colbert in December. “We have to examine that, and we have to weigh that against the amount of jobs that it’s actually going to create, which aren’t a lot. Essentially, this is Canadian oil passing through the United States to be sold on the world market. It’s not going to push down gas prices here in the United States. It’s good for Canada.”

But for years, Obama has been reluctant to kill the project entirely (he is currently awaiting the outcome of a Nebraska court case on the pipeline’s route). One countervailing factor is that Keystone XL is quite popular — polls have found that the broader American public was overwhelmingly in favor of the project. It also didn’t help that US gas prices have been high for most of Obama’s presidency. That allowed Republicans to turn Keystone into a wedge issue: they could argue that Obama’s environmental policies were making energy expensive for everyone.

Now things have changed. Gasoline in the US is now the cheapest it’s been in years. And, as many political onlookers have observed, that could upend the politics. “Democrats can probably hold [Keystone XL] up in the Senate without paying any real price,” writes Kevin Drum, “and even if they can’t, Obama can veto it without paying any real price. It’s lost its salience for the time being.”

In the end, that might matter far more than the economics of the pipeline itself.

— Why oil prices keep falling — and throwing the world into turmoil

— Elana Schor was one of the first reporters to write on the interplay between low oil prices and Keystone XL, back in December.