Workers use city vehicles for far-flung commutes – The Boston Globe

A Boston police canine officer commutes some 110 miles round trip from his home in Buzzards Bay in a Crown Victoria. A district fire chief makes an even longer journey, driving a Ford Fusion from Sandwich on Cape Cod to Boston.

They need not worry about the mileage — Boston taxpayers bear the expense for their cars, oil changes, and all other maintenance. The city even pays for thousands of gallons of gasoline the two men burn each year.

At the end of each workday in Boston, 106 municipal employees drive city-owned vehicles home to 52 suburbs, according to an analysis of data the Globe obtained under the public records law.

The perk goes to municipal employees who could easily afford monthly commuter rail passes: Workers driving city vehicles home to the suburbs were paid an average of $190,000 in 2015, according to payroll records. 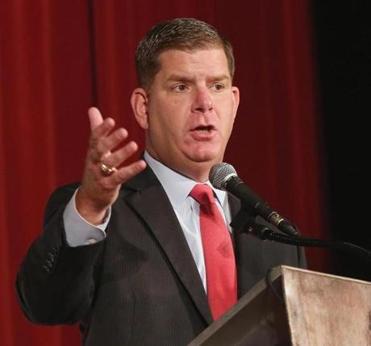 Almost all of the city’s collective bargaining contracts allow union members to move out of the city after 10 years of service.

“If the employee does not want to live in the city, then the taxpayers shouldn’t get stuck paying the bill for the gas, maintenance, and repair,” Flaherty said. “No one is that important.”

City-owned vehicles have been driven home to the suburbs since long before Mayor Martin J. Walsh took office two years ago. The costly, far-flung commutes are a symptom of a residency requirement for city workers that has been hollowed out by exemptions and loopholes, unevenly applied, and openly flouted.

According to data from the Walsh administration, take-home vehicles have been provided to 213 individuals. The Globe cross-referenced car assignments with payroll data and found that 107 of the employees live in Boston, while the rest commute from suburbs.

Take-home vehicles — which include Ford Crown Victoria police cars, Ford Explorer SUVs, and Dodge Caravans — are provided to employees whose jobs require them “to frequently be on call during emergencies and travel between different sites in the city,” said Bonnie McGilpin, a spokeswoman for the mayor. Employees are not allowed to use take-home cars for personal reasons.

The issue of take-home cars underscores the impact of Boston’s tattered residency requirement. The mayor has proposed changes to the policy that, McGilpin said, would usher in “a new era of consistency, enforcement, and fairness.” Walsh’s plan would require new appointees to the police command staff to live in Boston. Current members of the
staff have take-home vehicles, and most live in the suburbs.

But Walsh’s proposal would perpetuate one of the fundamental problems of a residency law that has long granted special treatment to favorite employees. One section of the proposal would create an exemption for a single employee: interim Public Works Commissioner Michael Dennehy, who lives in Milton and commutes at taxpayer expense in a city-owned Ford Escape filled with taxpayer-funded gasoline.

Other cities have similar policies allowing take-home vehicles to be driven to suburbs, including New York, Los Angeles, and Worcester. The City of Chicago, however, has a strict residency requirement and no take-home cars for commutes to the suburbs, according to Mayor Rahm Emanuel’s office.

Councilor Frank Baker, who served on the residency commission and calls himself a supporter of a strong residency rule, said many employees with take-home cars need them to respond to emergencies. “It’s a good perk for them,” Baker said, “but for most of those people, it’s about being able to rely on them to get back [to work].”

‘If the employee does not want to live in the city, then the taxpayers shouldn’t get stuck paying the bill for the gas, maintenance, and repair. No one is that important.’

The Boston Fire Department has assigned take-home vehicles to 38 employees, 12 of whom live outside the city. That includes District Fire Chief Gerard Cahill, who drives a Ford Fusion from Sandwich.

The command staff and inspectors get take-home cars, but so, too, do the department’s human resources director and two deputy commissioners overseeing finance and legal affairs. Those three take-home vehicles do not have emergency lights or sirens, and they have been given to employees whose jobs necessitate travel around the city, according to department spokesman Stephen MacDonald.

Dennehy and six other city workers drive vehicles to and from Milton.

The 60-mile round-trip commute from Marshfield is made by five employees in city-owned cars, including a Ford Taurus driven by Anthony Pomella, a mechanical engineer for Boston Public Schools who responds to frozen pipes, power outages, and other emergencies.

It is impossible to determine the total taxpayer cost of the suburban commutes. The city supplies millions of dollars’ worth of gasoline to pumps at police stations, firehouses, public works yards, and a school department facility. According to the Walsh administration, no one tracks how much fuel is burned on trips to and from work.

The workers who live outside the city burned 45 percent more gas than colleagues who reside in the Boston, according to the available data from the city’s departments. Last year, that cost taxpayers, on average, $531 more per employee. Among the 30 employees with take-home cars who used the most gas, the overwhelming majority drove back and forth to far-flung suburbs such as Berkley, Franklin, and Medway.

Cahill, the district fire chief commuting from Sandwich, declined an interview request. The Boston Fire Department does not track fuel consumption by individual employees, but the department spent $432,574 on gasoline in the most recent fiscal year. (All fire apparatus — engines, ladders, rescues, and fire boats — use diesel and would not be included in the gasoline total.)

Boston police canine officer Sean Scannell, who commutes from Buzzards Bay, burned more than 2,818 gallons of gas. That was 25 percent more last year than any other city employee who has a take-home vehicle and whose fuel consumption was tracked, according to the data. Scannell did not respond to an interview request.

A Police Department spokesman, Lieutenant Michael McCarthy, said Scannell is a canine officer who patrols all of Boston and needs his squad car to take home his dog. Canine officers use more gas because their cars serve as kennels and they often leave the engine running to keep dogs warm in winter and cool in summer. The department does not track how much gasoline Scannell and others consume commuting to work.

“Officer Scannell is not required to live in the city,” McCarthy said in an e-mail, nothing that union contracts allow city workers to move to the suburbs after 10 years of service.

“There are some positions where they do need their cars, but I think this may have expanded beyond the real need,” said Samuel Tyler, president of the Boston Municipal Research Bureau, a fiscal watchdog. “There really needs to be a careful review of policies.”