$85.00
Home › Blog › US Automotive News › After victory at Le Mans, we catch up with Ford to talk about its GT – Ars Technica

After victory at Le Mans, we catch up with Ford to talk about its GT – Ars Technica 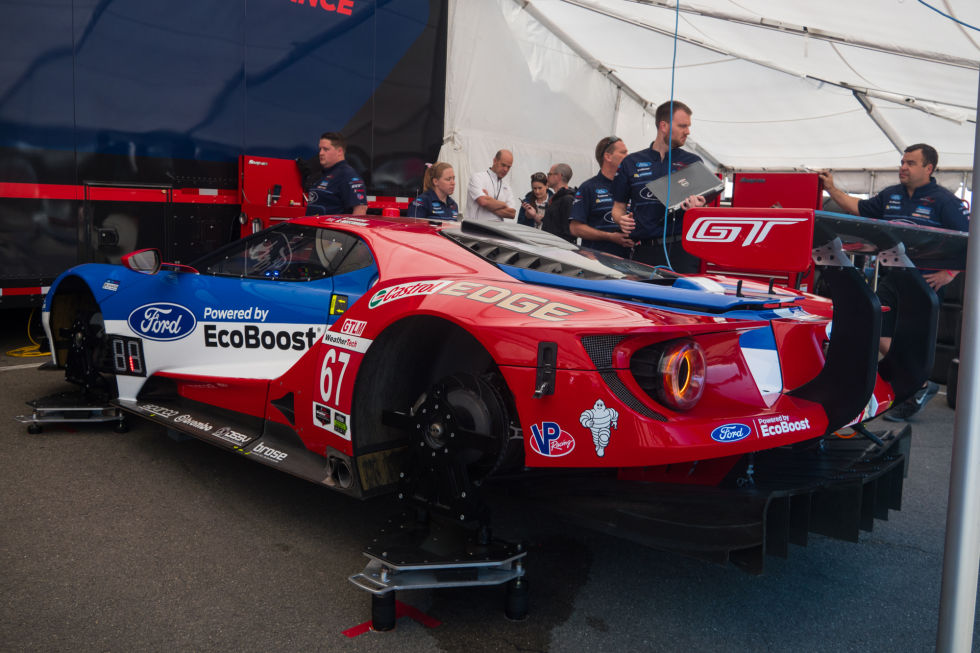 Ford mechanics and engineers prep the car for the six-hour race ahead.

Just as it was 50 years ago, the battle for sports car supremacy on the world’s race tracks this year has been between Ford and Ferrari. At this year’s 24 Hours of Le Mans, the two marques were head-and-shoulders ahead of their competition in the hotly contested GTE-Pro class (for racing versions of cars that you or I could buy). Ford emerged victorious, but the end of the race was somewhat acrimonious, with protests and counter-protests from both camps. We caught up with both teams at their next match up—the Sahlen’s Six Hours of the Glen at Watkins Glen in upstate New York—both to check out their machinery and also to find the hatchet well and truly buried.

Back in 1966, after Henry Ford’s attempt to buy the Italian car company was rebuffed, his company built the legendary GT40, beating Ferrari’s V12-powered cars at Le Mans and most everywhere else. To celebrate the 50th anniversary of that match up, Ford decided to build (and race) a new mid-engined supercar, the Ford GT. The road-legal Ford GT won’t actually appear until 2017, but Ford’s rivals all gave their permission for the Blue Oval to start racing the car this year—the rules insist on a minimum of 500 production cars built in order to be eligible to race.

Ford has been running a quartet of GTs on track, a pair in the WeatherTech Sportscar Championship here in the US, and another pair contesting the World Endurance Championship. The cars aren’t just racing for glory either; Ford Performance (the division of the company responsible for the GT as well as the Shelby GT350 and Focus RS) is using the experience to develop and improve the road car ahead of production. We met with Mark Rushbrook, motorsports engineering manager at Ford Performance, to find out more.

“Le Mans went really well,” he told us. “The goal was to go there and win the race.” Just two weeks had elapsed since the big showdown in France, which left little time to get ready for the return to the States and the rest of the WeatherTech season. “There’s been no physical development of the car or testing [since Le Mans] but we’re constantly running our simulations and analytical tools,” Rushbrook said. Ford took part in a test at the newly resurfaced Watkins Glen track a few weeks previously, though. “So we looked at our test data, ran some simulations to finalize our aero settings, our chassis settings, everything with the engine and shift points [for the gearbox] so there’s been a lot of work in the last two weeks.”

“There are two different downforce configurations, and this is the high downforce configuration, which has different dive planes to it and different wing angle settings, but we still have the ability to tilt the wing up and down,” Rushbrook continued. “We don’t have as much downforce here as we would for a track like Laguna Seca, but we do have more downforce than Le Mans. We’re planed out about halfway down on the rear wing. We looked pretty good in practice [the Fords topped the time sheets] so the testing paid off. Again, it’s a new car, we’ve continued to learn, even though we did a lot of development through the end of last year. Every time we race it learn something new about the car, and we keep getting better with it.”

We asked Rushbrook whether he was surprised by the GT’s performance during qualifying at Le Mans, where the cars suddenly started setting lap times that were 4-5 seconds faster than they had been during testing and practice. In fact, the sudden gain of speed by the Ford GTs and also the Ferrari 488s lead to much grumbling from other competitors and fans that the so-called “balance of performance” [where the organizers attempt to equalize the grid] had gone awry, the result of some extreme sandbagging during the preceding few months.

“Yes and no,” he said. “Specifically in qualifying, that was the first time the car went flat-out. In practice we were working on race setup, so double-stinting the tires [running the same set of tires for more than one run between pit stops], a full load of fuel, and knowing we wanted the tires to go two stints. So in qualifying that was the first time on that track that we had run a low fuel load with brand new tires. Definitely we went faster than practice, but it was a great back-and-forth with Ferrari on that first qualifying session—there was a lot of adrenalin!”

Whether by design or happenstance, Ford and the Risi Ferrari team (which came second at Le Mans) had been placed right opposite each other in the Watkins Glen paddock. Now, endurance racing is a sport with a lot more camaraderie than the cut-throat nature of something like Formula 1, but we had to ask—what was the mood like between the two rivals now?

“I’d say it’s a very good relationship,” Rushbrook explained. “I was over there talking to David Sims [Risi’s team manager] yesterday, we talked a lot after Le Mans, and we agreed that we’re competitors that are very respectful of each other, and that just continued yesterday. We want to race each other on the track, compete, and beat each other on the track, but we don’t want to do that off the track. We’ve got complete respect for those guys and I think they do for us.”

This was indeed confirmed by Sims, with whom we also met to get his take. “Things are not bad at all,” Sims told us. “When we heard they were going to protest us, the start was, “if [Ferrari] win, we’re going to protest you…” OK. Then they did protest us, for something the ACO [the organizers of Le Mans] weren’t not going to bring us in to fix. It wasn’t the number plate, it was the leader lights.” (Sims is referring to the LED display that lets spectators know what position each car is running in, which aren’t required to be working throughout the entire race, unlike the electroluminescent panels showing each car’s number.)

“So then Ferrari told us to protest Ford, and it went on and on,” he said. “I said to the Ganassi and Ford guys, ‘If you’ve never done this before, there isn’t going be a winner in this. It won’t end at Le Mans.'” Sims explained that the ACO told the teams that any post-race protests would be settled in the coming weeks in Paris, until which time the finish of the race would remain in dispute. “And nobody’s going to win that one. So we started talking. I said the best thing to is to be sensible because we work together, we know the guys, and the team boys didn’t want to protest, it was Ford Corporate. In the end the best thing to do was shake hands. You withdraw your protest, I’ll withdraw mine, it’s easy. The ACO were very happy with that—Ford you win, Ferrari you get second place. It was no good coming away with the protest still on, it would have been a taint of the whole race,” Sims told us.