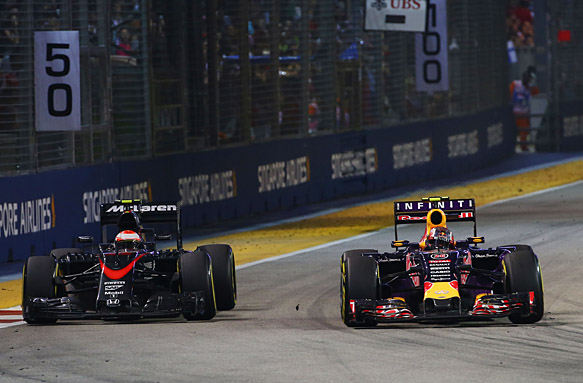 In its bid to acquire a power unit supply from 2016 after opting to ditch long-term partner Renault at the end of this season, Red Bull has turned to Honda after so far being spurned by Mercedes and Ferrari.

It has previously been claimed McLaren has no veto over Honda supplying another team, but Ecclestone has revealed Dennis does not want the Japanese manufacturer to join forces with Red Bull.

In a media briefing in the Austin paddock on Saturday, Ecclestone said: “At the moment it would appear Honda are happy to give them [Red Bull] an engine, and Mr Dennis thinks they shouldn’t.

“When Honda came in the FIA said to them if we let you into Formula 1 you’ve got to supply three teams.

“But they said ‘As we’re a brand new company, we don’t think we can do that’, so it was said to them to supply one team for the first year, two for the second and three for third.

“So Honda has an agreement with the FIA and myself that allowed them into F1 on the basis of supplying one team for the first year, etcetera.

“But they somehow made a commitment to Ron he had a veto, and he doesn’t want Red Bull. He believes they may be competitors.

“Ron has said definitely not [to a supply], as far as he’s concerned, but I don’t know if his veto will stand up or not.”

Asked as to how Dennis has a veto given the agreements with himself and the FIA, Ecclestone replied: “In fairness to Ron he probably didn’t know.

“I’m not blaming anybody. I said I’d tell you the facts and they are the facts.

“Red Bull could run Honda [engines] if Honda agreed, but they won’t agree to avoid having an argument with Ron.”

Suggested to Ecclestone that leaving Renault and being powered by Honda was effectively akin to jumping out of the frying pan into the fire, the 84-year-old said: “At the moment, but we don’t know what next year’s Honda is going to be like.”