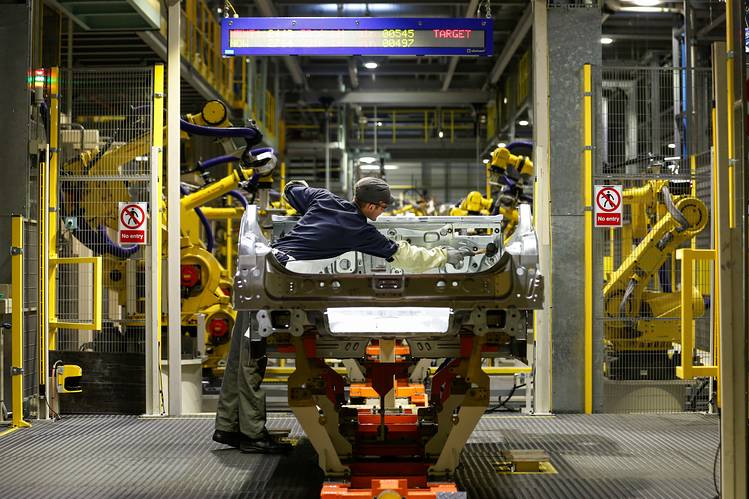 TOKYO—Concerns grew Monday over the impact on Japanese auto makers from Britain’s vote to leave the European Union, particularly Nissan Motor Co. because of its heavy investment in U.K. auto production.

Nissan shares fell 2.5% in Tokyo trading on Monday, after a decline of more than 10% Friday, when news of the British referendum result landed in the middle of Tokyo trading hours. Toyota Motor Corp. shares fell 1.7% Monday after a nearly 9% decline Friday.

Executives of Toyota, Nissan and other top Japanese companies huddled with government officials at the industry ministry in Tokyo to discuss “Brexit” scenarios.

“We will carefully analyze various aspects of the matter, given that there are still many uncertain factors,” said Shigeru Hayakawa, a Toyota senior managing officer, after the meeting.

Nissan, Toyota and Honda Motor Co. produce about half of all vehicles made in the U.K. each year. Most of the U.K.’s auto output is exported, and more than half of the exports go to EU nations, according to the U.K. automotive industry’s trade organization.

Nissan has invested £3.7 billion ($4.9 billion) in the U.K., where it has a plant in the northeastern city of Sunderland that produced nearly 500,000 vehicles in 2015. Toyota’s total investment is more than £2.2 billion. 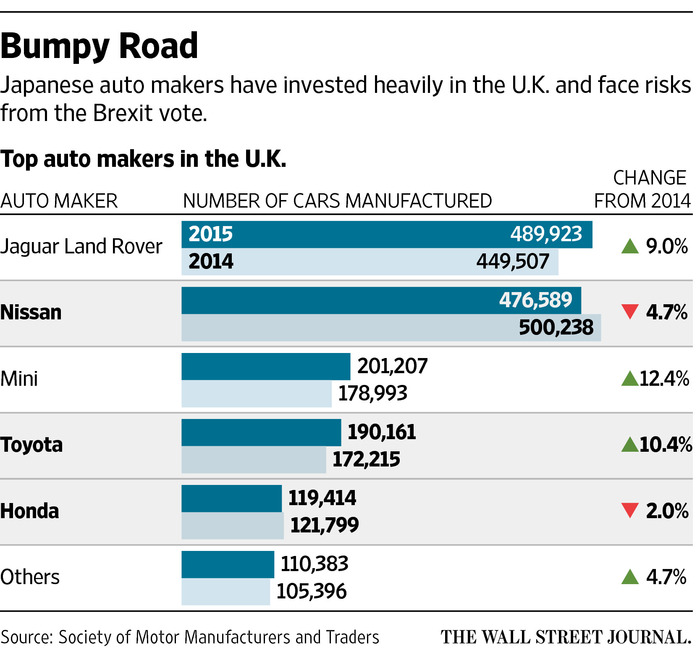 Nissan declined to comment on the referendum result, although it had been outspoken about its desire for the U.K. to remain in the EU. It took legal action when a group favoring “Leave” used the Japanese auto maker’s logo in promotional material.

Honda said it planned to produce a new model of its popular Civic within the country as scheduled. “We continue to prepare for the production launch of the 10th generation Civic from our Swindon plant,” it said.

The biggest danger for the Japanese auto makers, as with other companies that manufacture in Britain for export, is the possibility that Brexit would lead the EU to raise tariffs on British goods. Currently, plants such as Nissan’s in Sunderland enjoy preferential terms on exports to EU nations such as Germany because Britain is an EU member.

Japanese companies with European headquarters in the U.K. may transfer them to other European nations, or even wind down their European businesses altogether, said Daisuke Iijima, an official at market-research firm Teikoku Databank. Of 1,380 Japanese companies that have operations in the U.K., around 50 are in auto-related areas, he said.

Higher tariffs could force British auto plants to pay more to procure auto parts, said Daisuke Yamaguchi, a director at Japan External Trade Organization’s business research department overseeing Europe. And depending on the terms of Britain’s departure from the EU, Japanese auto makers might have to seek visas for immigrant workers from other EU nations who can currently travel freely to Britain.

The Brexit vote sent the yen sharply higher against the U.S. dollar and the pound, with investors viewing the Japanese currency as a haven. That is a particular problem for Japanese auto makers, which get most of their sales outside of Japan. They had seen profits surge on the weak yen in recent years, which inflated the value in yen of the dollars and euros they earned abroad.

However, Mr. Kunugimoto predicted Britain and the EU would agree to divorce terms that would limit the damage to Japanese auto makers. “We think the risk is relatively small given the high volume of automobile trading between the U.K. and the EU and the negative impact for both sides from higher tariffs and changes in regulations,” he said.

Write to Megumi Fujikawa at megumi.fujikawa@wsj.com