While the share price of General Motors Company (NYSE:GM) hovers around its IPO price, what are GM and its Board of Directors (the “Board”) doing to create value for shareholders?

Seemingly nothing. Or, at least nothing that is working.

Consider this simple fact: GM has the lowest price-to-earnings (P/E) ratio of any of the 500 companies in the S&P 500. The incumbent Board and management have failed to generate value for GM’s shareholders since its IPO, despite an equity bull market. We believe that more of the same thinking and the same capital structure is unlikely to lead to an increased valuation.

Despite these problems, the Board and GM’s management appear uninterested in fixing GM’s inefficient capital structure so that the capital markets can properly recognize the intrinsic value of GM. They are resisting both our recommended new directors, who would bring fresh thinking to the Board, and our proposal to split the common stock into two classes of common equity (the “Plan”), which has the potential to unlock tens of billions of dollars in value.

A vote on the GREEN proxy card is a vote for increased shareholder value. 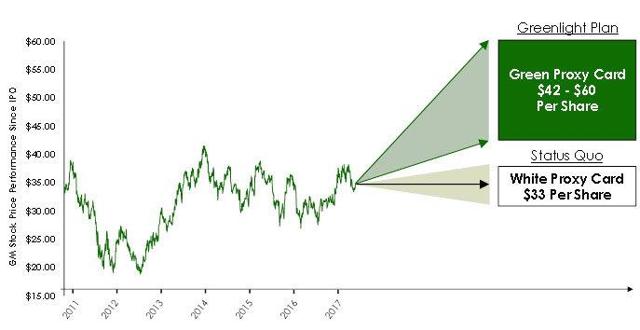 Why are the incumbent directors resisting our Plan and our nominees, given that GM’s current strategy has not created value for shareholders over nearly seven years? We can only assume the current directors are not concerned about GM’s languishing stock price.

Instead of properly evaluating a well-intentioned and carefully developed plan presented by one of GM’s largest shareholders, the Board is wasting more than $15 million of shareholder money to maintain the status quo by misrepresenting our Plan, distracting you from their track record, and defending the incumbent team. We think that the Board can come up with a better use for those $15 million, and we believe our Plan will unlock value within GM’s stated financial policy constraints without causing any harm to GM. Being against change is easy. It would be nice if GM actually had a plan to advocate for.