News 8 has learned that the squad processing vehicles at the Dallas police auto pound has fallen about 250 vehicles behind.
(Photo: WFAA)

It’s that it took five weeks to get it out of the Dallas police auto pound.

It’s happening because the nine detectives who normally do that work are now assigned to a task force rather than to their normal duties, which includes inspecting and authorizing the release of vehicles back to their owners.

News 8 has learned that the squad has fallen about 250 vehicles behind.

“It’s a material possession, so I don’t think it’s looked at as an urgency,” Bruton told News 8. 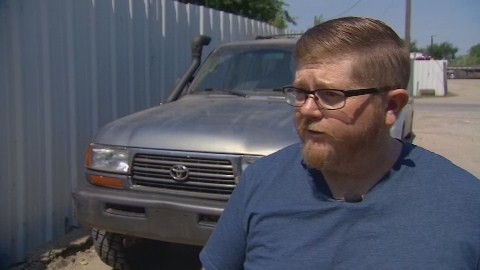 News 8 has learned that people have been repeatedly calling, trying to get their vehicles released from the pound only to be told that no detective is available to authorize the release of their vehicles. Some people have complained to their council members.

It’s an example of some of the work that is not getting done while detectives are assigned to task forces.

“This is what one of the ladies told me on the phone,” Bruton said. “‘If we have 30 cars coming in a day, we’re getting to look at five-to-ten of them a day, sometimes 15. So, that puts a deficit of 15 for the next day. So, they’re only covering day one by day three, and they’re moving on to day two, and it just keeps adding up.”

In response to a request for comment, the department acknowledged to News 8 that the auto theft salvage unit had been assigned to the property crimes task force.

“While their participation in the task force has proven effective in lowering the number of property crimes throughout the city, it has reduced the amount of time spent on administrative tasks, which has caused a delay in the release of some vehicles from the auto pound,” the statement said.

The statement added DPD would “temporarily reassign resources to work through any backlog of vehicles awaiting release.”

Auto thefts have actually gone up during the time the detectives have been assigned to the task force. The number of auto thefts was down by about six percent as of early April. They are now basically flat, or up slightly.

Consider what happened to Bruton. 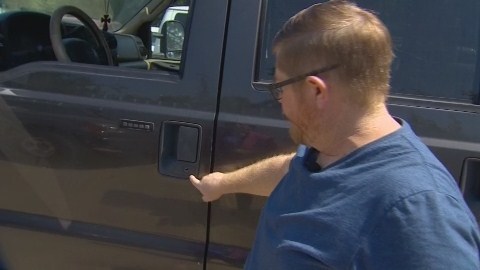 Kevin Bruton shows us the damage to his truck.

His truck was stolen on May 4. The thief busted out his passenger side window, busted his door lock, and broke his ignition. He even has a surveillance photo picture of the thief.

The truck was found the next day in Dallas.

He drove to the pound, thinking he’d be able to retrieve his truck.

They gave him a number to call. He called and they told him his truck wasn’t authorized for release. 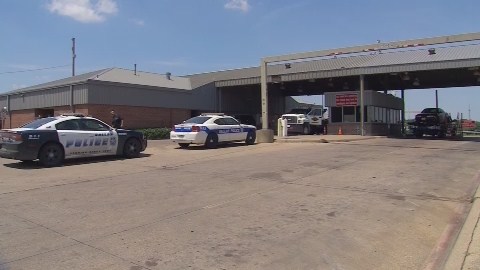 Bruton called the next day. He was told they would call him when the truck was ready to be released.

He says he was told the delay was because the VIN number had been pried off the dash and that an auto theft detective had to inspect the vehicle to confirm it was really his.

Two weeks went by, and his truck was still not released. Bruton called again and was told essentially the same thing — “don’t call us, we’ll call you” was the message.

Three more weeks passed. By now, he was irate.

Bruton called Police Chief David Brown’s office. He said the woman who answered the phone wouldn’t take his name or his number.

“As soon as I started telling her what was going on, she just said, ‘That’s out at the impound, that has nothing to do with us. You need to call out there, sir,’” Bruton said.

He called again to the auto theft unit, threatening to go the media. A police sergeant called that night, telling him it would be ready the next morning. He picked it up last Thursday.

It took only a few minutes for his truck to be inspected and authorized for release back to him. He says it just didn’t make sense that something that could be done that easily could take more than a month to get accomplished. 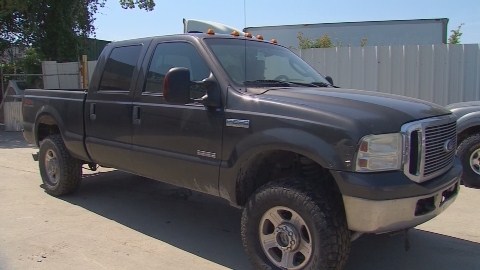 He says he’ll also end up paying hundreds more in rental car fees while he waits for the truck to be fixed.

He was also infuriated that the VIN number had not removed from his dash, as he had been told.

On top of that, Bruton’s truck had more damage to it than when it entered the pound.

Rain had poured in to it through the broken window during the time it was at the pound. The interior mildewed from all the rain.

He says he asked if he could put crash wrap around when the storms came and was told no.

“We had how many inches per hour, you know, during that storm,” he said. “I’m surprised I don’t got fish in there.”

Bruton says it’s not right for he and other vehicle owners to be further victimized by a system that just isn’t working.