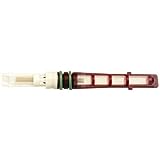 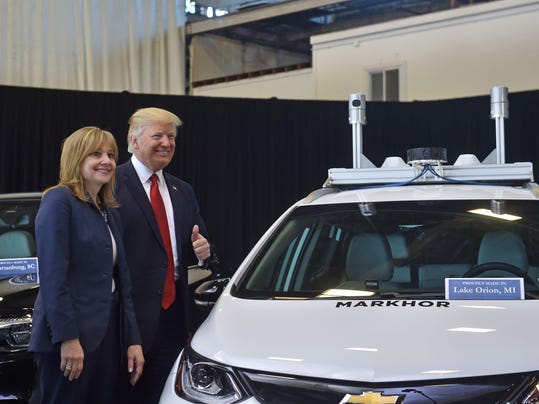 US President Donald Trump poses with General Motors CEO Mary Barra next to a Chevrolet Bolt, made in Lake Orion, Michigan, at the American Center for Mobility in Ypsilanti, Michigan on March 15, 2017.(Photo: NICHOLAS KAMM / AFP/Getty Images)

General Motors Co. plans to put as many as 300 more self-driving vehicles on the road, according to filings with the Federal Communications Commission.

Adding the test vehicles would give GM what would appear to be the largest fleet of self-driving cars in the United States. The automaker already is testing more than 50 Chevrolet Bolt EVs with autonomous technology on public roads in Detroit, San Francisco and Scottsdale, Arizona. The new additions would be tested in those locations as well.

Google-backed Waymo, considered another major player in autonomous testing, currently has 160 vehicles on the road.

On Friday, a GM spokesman declined to discuss details, but issued a statement to The Detroit News that said: “While we do not discuss potential future product plans, our plan is to launch our autonomous vehicle technology first in an on-demand ride-sharing network.”

The contents of the FCC documents were first reported Friday by IEEE Spectrum, the online magazine of the Institute of Electrical and Electronics Engineers.

GM officials successfully sought FCC approval last month for dedicating part of the radio spectrum for the company’s dedicated short-range communications that would allow GM cars to “talk” to each other and to sensors on roads. GM sought use of the 78-81 GHz range to allow partner Alps Electrics’ radar to work effectively.

Documentation from the lobbying effort provided a small glimpse of the automakers’ plans: Alps Electric officials sought to test its equipment in 300 vehicles.

“The plan is to conduct the experiment in private test facilities, roads, vehicle access-ways and parking facilities in metropolitan areas,” Alps Electric’s John Cabigao wrote in an April 4 email to an FCC official.

GM’s autonomous work with San Francisco-based Cruise Automation, acquired by GM last year, is bolstering its development of self-driving cars. Earlier this week, GM received an $8 million tax credit package from the state of California. Those credits will allow the automaker to invest $14 million in facilities for Cruise Automation and hire 1,100 more workers.

GM also is working with Lyft Inc. to develop a fleet of self-driving Bolts that would be used for ride-sharing.

Meanwhile, Ford Motor Co. announced late in 2016 that it would triple the number of its autonomous test vehicles in 2017, which would increase the size of the fleet to 90. Ford is testing the driverless cars in Michigan, California and Arizona; drivers are behind the steering wheel, ready to take over in an emergency. The company has vowed to have a fully driverless car without a steering wheel or pedals for braking and acceleration on the road in 2021.

In February, Ford also announced it would invest $1 billion over five years into a new artificial intelligence company, Argo AI, to develop the brains of its self-driving cars. In August 2016, Ford announced four investments and partnerships that it said would help it with its autonomous vehicle development.

The documents connected to GM’s push to secure space on the spectrum show company officials expressing confidence in their place in the push for autonomous vehicles. A March letter from GM to the FCC recapped an earlier meeting between GM and FCC officials that described comments made by John Capp, the carmaker’s director of global safety, strategy and vehicle programs.

“He explained that while GM is leading the industry with the deployment of the CTS, this technology is no different than others in… that in order to further develop the safety benefits, more testing must be done.”

A later passage in that same letter reads: “The (FCC) Chairman asked Mr. Capp and (GM’s Scott Geisler) if the other automakers are on the same aggressive timeline. They let him know that, while GM is ahead of others, GM believes that other, too, are also working on deployment…”