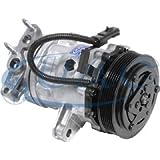 
In every possible quantifiable metric, the 2017 Ford F-Series Super Duty is better than before. Its body is lighter, its frame is stronger, it’s got enough torque to reverse the Earth’s rotation, and as much available luxury as a few certain European brands.


So why, then, after two days in the outskirts of Denver with Ford’s first ground-up redesign of the Super Duty since Bill Clinton was president, was I most impressed by something other than outright capability?


The 2017 Super Duty has brains as well as brawn, and that balancing act is arguably the most impressive feature – and the one that will likely help keep it on the top of the heavy duty pickup heap for more years to come.


Who needs a Semi when you’ve got a Super Duty?


“Best-in-class” might be the most popular phrase among new pickup brochures, but as it stands, Ford’s 2017 Super Duty can actually lay claim to the phrase – if not only for the fact that their heavy duty truck lineup is the newest.


With a maximum gooseneck towing capacity of 32,500 pounds on the F-450 with an optional package, just 1,500 pounds short of the maximum payload the government allows for a Semi towing a tandem axle trailer. RVs, boats, horses, other Super Duties, you name it – there are few things that the Super Duty can’t haul. This is good news for buyers, as Ford was keen to remind us that 90 percent of Super Duty customers they surveyed use their trucks for towing, many of whom do so on a regular basis.


Conventional towing is rated at a maximum of 21,000 pounds, and payload maxes out at 7,360 pounds, and what makes this all possible is the Super Duty’s brand new frame and overhauled optional diesel powertrain.


Using 95 percent high-strength steel, the Super Duty’s all-new frame is up to 24-times stiffer than the previous generation, adding increased towing and payload capability while also improving drivability. Ford was able to save weight to add back into the frame’s construction by using an aluminum body construction much like the F-150, but more on that later.


A tougher chassis wouldn’t mean a thing without a suitable engine and luckily for the Super Duty, Ford’s powertrain offerings are up to the task as well.


All Super Duty models come standard with a 6.2-liter V8 that makes 385 horsepower and 430 lb.-ft. of torque, but many buyers will choose to opt for the Power Stroke turbo-diesel V8 that’s available across the range. With 440 horsepower and a massive 925 lb.-ft. of torque, this potent power plant gets the same configuration in all models, from the base F-250 all the way up to a fully-loaded, dual-rear-axle F-450. Heavy Duty pickups are inching ever closer to that elusive 1,000 lb.-ft. mark, and Ford just made the biggest leap yet towards the finish line.


It can even handle its own off road, as evidenced by a hilariously-fun dirt course in Denver that featured massive boulders, hills with 25-plus percent grades, and an enormous mud pit to top it off, all of which the Super Duty handled with ease, naturally. The hill descent control and arsenal of exterior cameras made navigating treacherous terrain a breeze, and there are few things this truck is unable to climb over with 925 lb.-ft. at its disposal.


If there’s one glaring negative of all this performance, however, it’s the fact that the EPA does not require makers of heavy duty pickups to report fuel economy estimates, because they are classified as commercial rather than standard passenger vehicles. The reality is that the pickup market in the U.S. is larger than it’s ever been, and with fuel economy and emission regulations tightening up in every other segment of the auto industry, it’s time for heavy duty pickups to be held to the same standards.


As thoughtful a work truck as there’s ever been


Beyond the brute strength to tackle seemingly everything you could throw at it, the 2017 Super Duty lineup also provides some handy tools for everyday life with a pickup.


Ford also claims the center console can be used as a “mobile office,” a fact backed up by an engineer in the Mile-High City who set up a laptop on the armrest for reference, piled four more into the Super Duty’s various pockets, then used the Bluetooth to participate in a conference call with the Ford mother ship in Dearborn, Michigan.


The center console also features the most revolutionary change to cup holder design in the gadget’s history, turning two cup holders into four just by sliding a panel.In case anyone’s counting, that’s enough space for two coffees and two waters, a morning staple of trade workers everywhere. Throw in a warmer for bacon, egg, and cheese sandwiches on a roll and New Yorkers may not buy another truck ever again.


Power lifter and computer geek at the same time


So the 2017 F-Series Super Duty is as utilitarian as ever, but like I said, the optional technology is what left the biggest impression on me after all was said and done, namely the trailer-conscious driver assist technologies and arsenal of exterior cameras.


Adaptive cruise control has become available on many new cars and trucks in 2016, but the system in the Super Duty will account for your trailer as well, even on a gradual decline at 70 miles per hour, and even with 30,000 pounds out back. I got the chance to test the system on a dually F-350 with a 10,000 pound horse trailer, and it worked seamlessly to control all of the extra weight and length. Automatic engine braking is also available – just use the brake to set the speed at which you want to coast downhill, and the truck will keep you there no matter how steep.


With up to seven available cameras (including the camera mounted above the windshield for lane departure warning), the Super Duty allows you not only to see 360 degrees around the truck, but into the bed to check on your payload – or hook up a gooseneck trailer without hopping out multiple times to check if the hitch is aligned – and behind your trailer with a wired camera that can be mounted anywhere you like.


Using perspective distortion, you can view a 180 degree window of the front of the truck – perfect for parking in tight spots or seeing crossing traffic and pedestrians when creeping out of a tight New York City alleyway – and even line up your conventional trailer perfectly with the hitch, using handy stickers that Ford supplies with every Super Duty equipped with the camera system.


The sticker system also allows you to log different trailers into the Super Duty’s system, which can keep track of everything from weight information, miles travelled and even trailer tire pressure.


This system also includes trailer backup guidance, which uses the mirror-mounted cameras to show you a zoom view down the side of the trailer, and the tailgate camera to keep track of the trailer’s stickers to warn you when you’re in danger of jack-knifing. It will even project a steering wheel diagram on the screen that shows you how much steering and in which direction you need to turn the steering wheel to back your trailer up in a straight line.


There’s also a new adaptive steering system that helps manage the Super Duty’s otherwise massive turning ratio, using a small electric motor to help point the truck in the right direction with less turns of the steering wheel. For only an extra $650, it’s well worth the markup.


One benefit of releasing the Super Duty after the aluminum-bodied F-150 is the ability to share components, and even entire sections of the truck, which is why you’ll find little difference between the cabin of the F-150 and its much larger siblings. The Super Duty is almost equal in terms of interior dimensions, and uses many of the same materials, surfaces, knobs and buttons that the more consumer-oriented pickup does.


The result is a Super Duty cabin that can be exactly as luxurious as some of the higher-tier F-150 models like the King Ranch and Platinum editions, and an interior design that feels immediately familiar (and saves Ford precious manufacturing dollars, of course).


Have it your way


With three different models, three different body styles, two engines, two drivetrain configurations, and five trim levels to choose from, it’s easy to get lost in the complexity of the Super Duty range. From the base, vinyl bench seat-equipped F-250 XL (which starts at $32,535) all the way up to the F-450 Platinum (starting at $77,125), there’s almost a $50,000 price range of Super Duties to choose from, a figure unheard of from almost any other type of vehicle.


Whether you want no frills and the power and capability of the turbo diesel engine with four wheel drive, or a simple gas V8 and all the bells and whistles like Sync 3 infotainment, in-car Wi-Fi, massive 22-inch alloy wheels, leather seats, and real wood trim, there’s a Super Duty for everyone, and right now, the numbers just can’t be matched by the competition from Chevrolet, GMC, and Ram.

Did you find this article helpful? If so, please share it using the “Join the Conversation” buttons below, and thank you for visiting Daily News Autos.