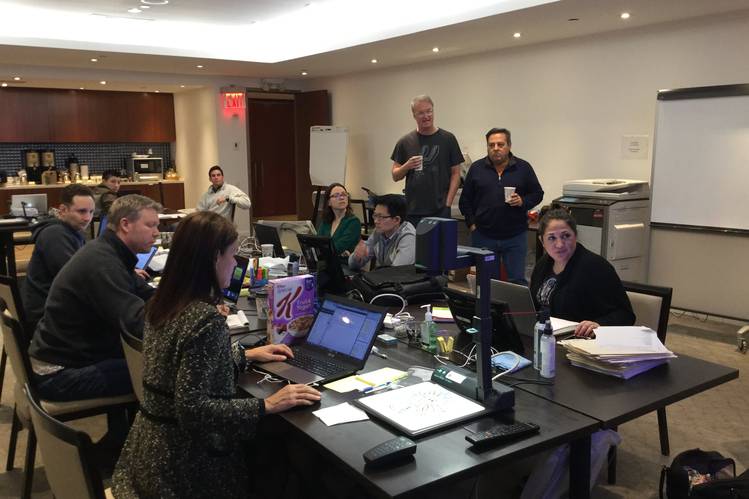 The trial begins the same day GM takes the stage in Detroit at the North American International Auto Show to highlight a future Chevrolet hatchback and electric car. The ignition-switch case, part of consolidated litigation in a New York federal court, will dredge up for a jury past safety lapses the auto maker has worked to put behind it for the better part of two years.

The trial is a reminder that GM still faces potential financial penalties over the faulty switch even after reaching settlements with the U.S. Justice Department, shareholders and thousands of consumers totaling more than $2 billion. Remaining lawsuits and additional government probes loom.

Monday’s trial in lower Manhattan stems from a May 2014 crash in Oklahoma. Robert Scheuer, 49 years old, alleges he suffered neck and back injuries because a defective ignition switch on his 2003 Saturn Ion prevented the air bag from deploying when his car crashed into a tree, according to court records. Mr. Scheuer’s Ion car, now destroyed, is among roughly 2.6 million older vehicles GM recalled in early 2014 for a faulty switch that can slip out of the run position, disabling safety features including air bags. The lawsuit also alleges the switch affected power-steering and braking when it slipped from the run position.

A GM spokesman said the company will show jurors the ignition switch in the Scheuer case didn’t rotate and that the vehicle’s air bags weren’t designed to deploy in the Oklahoma crash. The spokesman added that GM has already resolved “a large majority of the ignition-switch personal injury and wrongful death claims filed since the recall.”

The Scheuer case is the first of several “bellwether” cases this year aimed at setting a pattern for additional settlements between GM and plaintiffs. A federal judge is overseeing so-called multidistrict litigation that culled together widespread personal injury, wrongful death and economic-loss lawsuits tied to the defective switch.

Chief Executive Mary Barra and many other current and former employees have been deposed in the litigation. Jurors are expected to hear testimony from some of those depositions.

The Scheuer case is expected to last roughly three weeks and aims “to give everyone else a road map to get their cases settled and give GM some clarity on how much to pay in different types of cases,” said Bob Hilliard, a Texas lawyer representing Mr. Scheuer and co-lead counsel in the consolidated GM litigation.

Steve Berman, a Seattle lawyer at Hagens Berman Sobol Shapiro LLP, is co-lead counsel for aggrieved customers alleging declining resale values and is also working on the Scheuer trial. Messrs. Hilliard and Berman, along with dozens of other lawyers and legal assistants, are preparing for the trial in basement conference rooms at the Andaz hotel on Wall Street.

Tables are lined with strewed papers and laptops. Whiteboards with witness lists sit in corners. One wall features a sign emblazoned “GM’s Wall of Shame,” atop a series of photos of GM employees. A GM spokesman declined to comment on the display.

A Justice Department probe and a report GM commissioned by former U.S. attorney Anton Valukas found the auto maker failed for more than a decade to recall millions of older small cars equipped with the defective ignition switch despite internal evidence of a safety problem.

GM in September admitted to criminal wrongdoing and agreed to pay a $900 million penalty in a settlement with the Justice Department over mishandling the safety defect. The company in 2014 paid a $35 million regulatory fine and signed a consent order acknowledging the company failed to alert the National Highway Traffic Safety Administration to the ignition-switch safety defect in a timely manner as required under federal law.

In the New York trial and others like it, GM will contend the defective switch wasn’t to blame for the crash or resulting injuries. GM has already admitted the part itself is defective.

“Each plaintiff must prove to a jury that the ignition switch rotated during the accident, the timing of rotation prevented the air bag from deploying, and that plaintiff’s injuries were caused by the air bag not deploying,” the GM spokesman said.