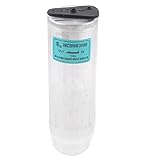 A Michigan State Police officer shoots at the doors of a Ford Police Interceptor vehicle during ballistic testing of doors against small arm fire at the Livingston Conservation and Sports Association in Brighton, Mich. Ford will soon be offering doors on its Police Interceptor sedans and SUVs that can protect against armor-piercing bullets.(Photo: Ryan Koehler, AP)

In a sign of the times, Ford Motor says it is upgrading protection in the doors of its police cruisers to defend against armor-piercing bullets.

With a greater danger that assailants will use high-powered or assault rifles with rounds that can easily punch through cars doors, Ford officials say it’s an improvement that police departments have been seeking.

Ford is a leading maker of police pursuit vehicles. After dominating the market for years with its Crown Victoria sedan, Ford successfully migrated many departments over to its Ford Explorer SUV, which it says is a best seller. Ford isn’t alone in noting the need for ballistic protection. Fiat Chrysler Automobiles says it has had protection against bullets in the police version of its Dodge Charger since 2012. General Motors says it has an aftermarket outfitter that adds protection to its Chevrolet Caprice police car.

Ford officials say they have been working on the bulletproofing upgrade for more than a year. It was accomplished by creating two layers of protection, including ceramic tiles and a Kevlar-type material known for stopping bullet strikes. From an engineering standpoint, it was a tricky challenge. Not only is there little room in doors for more panels, but the extra protection adds weight, says Randy Freiburger, Ford’s special vehicle engineering supervisor. The doors were tested on machines through more than 100,000 slams to make sure the hinges will hold up.

Michigan State Police officers tested the increased protection by shooting up doors with high-powered rifles. The goal was to meet what the Justice Department defines as level IV protection: the ability to resist .30-caliber armor-piercing bullets.

A former police lieutenant who was hit by bullets 15 times in a 2012 shootout with a white supremacist  says the protection is needed.

“If you are doing a high-risk (traffic) stop or felony stop,  you push that car door open, and you are yelling commands from a position of cover,” says Brian Murphy, who now consults for a bulletproof vest maker after recovering from his wounds and retiring from the Oak Creek, Wis., Police Department.  Many current door panels “really provide no protection.”

Entry holes through the outer skin of the door panel of a Ford Police Interceptor Utility vehicle during ballistic testing of doors against small arms fire (Photo: Ryan Koehler, AP)