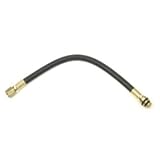 Ford is aggressively trying to achieve an average fuel economy for its fleet of 54.5 miles per gallon by 2025.

That might come as a surprise considering the company was one of several auto companies that pushed the Trump administration to revisit emissions standards earlier this year. But Fields told Business Insider that hitting the fuel efficiency standards on time is still very much its plan.

“Our intent is to meet the standard,” CEO Mark Fields told Business Insider.

In 2011, the auto industry and the Obama Administration EPA agreed to the 54.5 mile per gallon target and the 2025 timeline as part of the updated CAFE standards. However, the original agreement included a “midterm review” where all parties would meet in 2018 and reassess whether or not the target was realistic based on current technology and the economic climate.

But in late 2016, Barack Obama locked in the emission standards, which meant no evaluation in 2018.

Fields said Ford pushed the Trump administration to reinstate the midterm review because implementing these standards should be a data-driven process where things like consumer demand and the state of the technology are taken into account.

“I will just reiterate, that because we have asked for the reinstatement of the midterm review, which was the agreement when we agreed to the fuel economy requirements back in 2011, that doesn’t change our approach to sustainability. The goals are still the same and our commitment is still the same. We just want to make sure it’s aligned with market realities,” Fields said.

During the last few years, Ford has made some bold bets on the future of its business.

The automaker announced in 2015 it would spend $4.5 billion by 2020 to offer 13 new EV nameplates. The company has so far revealed several of the vehicles it plans to launch, including an F-150 hybrid, a Mustang hybrid, and a fully electric SUV with a range of 300 miles per charge.

But the auto giant is also expanding into new territory, mainly mobility services.

In September 2016, Ford bought Chariot, a shuttle service based in San Francisco, which will soon expand to more cities. The company is also working on level 4 autonomous vehicles, which it wants to use for a ride-hailing service. Ford aims to bring these vehicles to market by 2021.

But Fields said that all of these new areas of business are more than just a way to make money. These new ventures also help the company address sustainability problems facing the world today.

In an effort to promote its push for sustainability, Ford partnered with Vice to present the documentary “The Third Industrial Revolution: A New Story for the Human Family” at this year’s Tribeca Film Festival in New York City.

The film, which premieres April 22, features economist Jeremy Rifkin laying out a roadmap for how companies and consumers can address economic issues and climate change.

Fields said that he hopes the film sparks more conversation about the environmental issues at hand and is glad Ford could help bring the film to the festival.

“Being part and promoting the conversation around sustainability and mobility issues is evidence about how serious we are about this,” Fields said. “We are working really hard to start that conversation and show how Ford is bringing solutions, as opposed to just talking about the problem.”