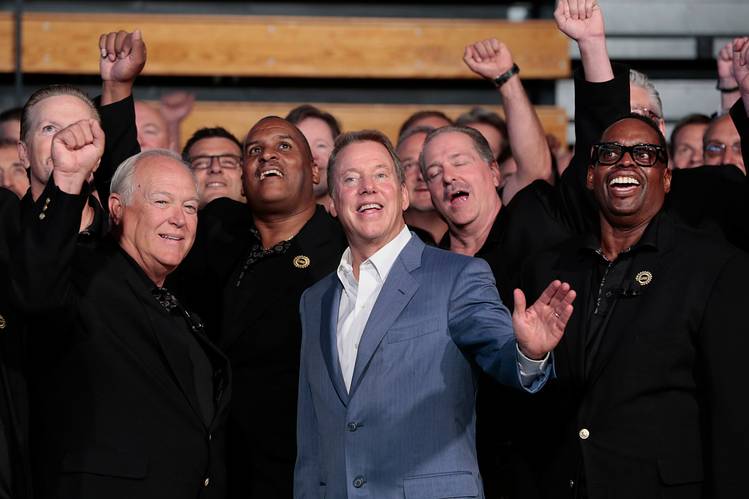 Dennis Williams, president of the United Auto Workers, front row left, Bill Ford, executive chairman of Ford Motor Co., center, and Jimmy Settles, UAW vice president, right, and others during the ceremonial start of labor negotiations in Detroit on July 23. Ford has since offered the union a rich labor contract, people familiar with the situation say.


is offering U.S. factory workers a hefty $10,000 in bonuses if they back a new labor pact reached on Friday with the United Auto Workers union, an agreement that is far richer than deals cut at rivals General Motors Co.
GM

Ford’s 52,900 union-represented workers will also get another $1,500 in a yearly inflation-protection bonus over the life of the four-year agreement, along with across-the-board pay raises and better health benefits for newer hires, say people briefed on the proposal.

The no. 2 U.S. auto maker is pledging $9 billion in new factory investments as part of the deal, a move that will create or retain 8,500 jobs, these people said. That is more than double the commitment made by GM in its agreement with the UAW.

Some workers at Ford will also be eligible for a $70,000 retirement incentive, the people say.

UAW officials are touting the Ford deal as one of its richest in the company’s history but declined to release specifics ahead of a private briefing with local union leaders in Detroit on Monday.

The $10,000 payout alone will cost Ford roughly $530 million, an expense the company expects to book in the fourth quarter.

The figure includes both a $8,500 signing bonus paid out if the contract is ratified and a $1,500 advance on the profit-sharing checks slated to be distributed early next year, say the people briefed on the contract details.

With U.S. auto sales tracking at the fastest pace in more than a decade, Ford has been posting record profit in North America off strong demand for its highly-lucrative trucks and sport-utility vehicles.

Workers’ expectations were high heading into contract talks this summer and UAW officials sought to get a slightly better deal at Ford, the only Detroit car maker to avoid bankruptcy during the recession.

On wages and benefits, the Ford deal largely mirrors the agreement struck at GM, with newer workers getting an eight-year path to a higher $29-an-hour wage and more senior factory employees receiving their first wage increase in about a decade.