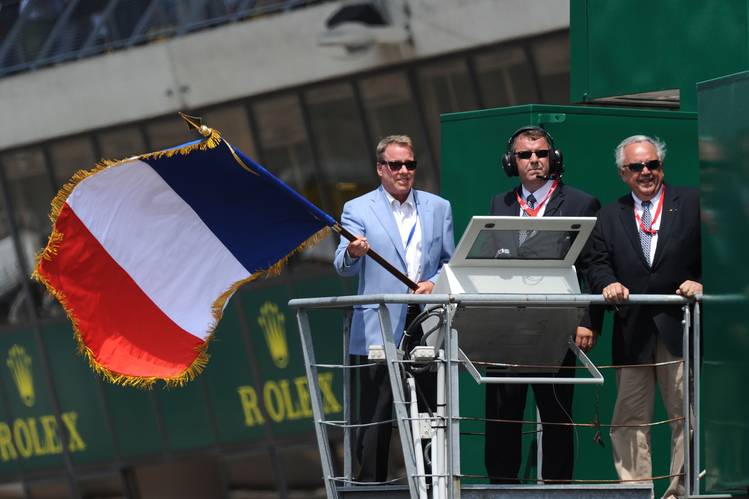 The biggest auto race in the world is also the biggest stage for auto makers. This past weekend hybrid prototypes from Porsche, the luxury sports car manufacturer held by VW Group,
VLKAY


screamed and whistled to a 1-2 victory over defending champions from Audi,
NSU


also owned by VW, at the 24 Hours of Le Mans. The sibling rivalry played out over the rolling countryside of La Sarthe, about 115 miles southwest of Paris, on the most perfect weekend since old Gaul, in front of a festival crowd estimated at over a quarter-million souls, and a global audience of about a billion, between one click and another.


Company wants in on the love. Ford announced here on Friday it will field a factory-sponsored team in next year’s race, 50 years after the company overwhelmed the Italian icon Ferrari in one of history’s greatest grudge matches. At 3 p.m. Saturday, Ford Executive Chairman William Clay Ford Jr. waved the French flag, an honor that can be taken as a sign of how keen race organizers ACO [Automobile Club de l’Oeust] are to have Ford back.

“Everyone has been so welcoming,” said Ford at an event before the race. “Not just the ACO but all of the manufacturers. And it’s really sincere.”

While Ford engineers said they had been in consultation with the ACO for some time regarding technical details, the approval of Ford’s new car, the Ford GT, was notably brisk (the ACO has been famously gnomic about its own rule packages in the past). “From the very beginning we knew we were going racing with this car,” Ford explained.

Ford will support a multicar team led by Chip Ganassi, not only at Le Mans but through the slate of races in the World Endurance Championship and the Tutor United Sports Car Championship.

OEM-friendly rule packages and the FIA WEC’s calendar of races in the growth markets of Asia have led to a record amount of auto maker participation. Next year’s Le Mans, with factory teams from seven established auto makers including Toyota and Nissan, will constitute a sort of championship of marques.

“I want everybody to know, we race to win,” said Ford. 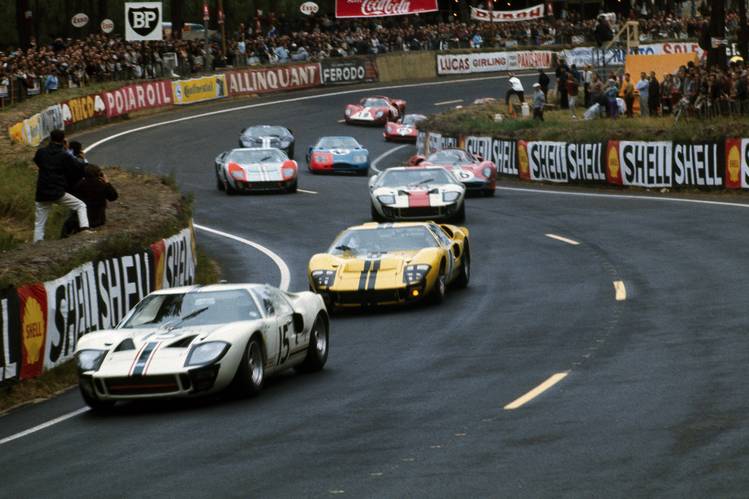 With an asterisk. Ford won’t be contesting the overall win next year against the state-of-the-art hybrid prototypes from Porsche, Toyota or Audi. The GT, a carbon-bodied mid-engine sports car powered by a production-based 3.5-liter turbocharged V6, will compete in the GT Endurance Pro Class, the third-tier class after the two prototype classes, with Aston Martin, Corvette and Ferrari. A top-tier prototype (LMP1) program, with multiple cars, has been estimated to cost as much as $1 billion.

There is not much appetite for such a number among Ford execs. “We win when we are properly resourced, and we’re not just showing up,” said Ford chief executive Mark Fields.

And while the 2016 race will reboot the Ford-Ferrari rivalry—which will likely be hyped to the moon—many Americans will be choosing up between Ford and GM’s Corvette.

General Motors’ vice president of global design, Ed Welburn, on hand for the race, gently avoided raising expectations. “I think Corvette is in some great competition this year, with Aston Martin and Ferrari,” Wellburn said.

Still, he understands people’s interest: “That crosstown rivalry between Ford and Chevy is something special.”

Porsche’s coronation as 24 Hours of Le Mans champions was anything but, with defending champions Audi finding an extra gear and keeping it close through the night. But by Sunday afternoon, it was clear that the pace and reliability of the Porsche 919 Hybrids wouldn’t be denied. The win by No. 19 car, driven by F1 ace Nico Hulkenberg, Nick Tandy and Earl Bamber, is Porsche’s 17th overall win and the first since 1998. This win snaps Audi’s five-year streak and is sweet revenge for last year, when Audi spoiled Porsche’s return to the top-tier of international endurance racing. 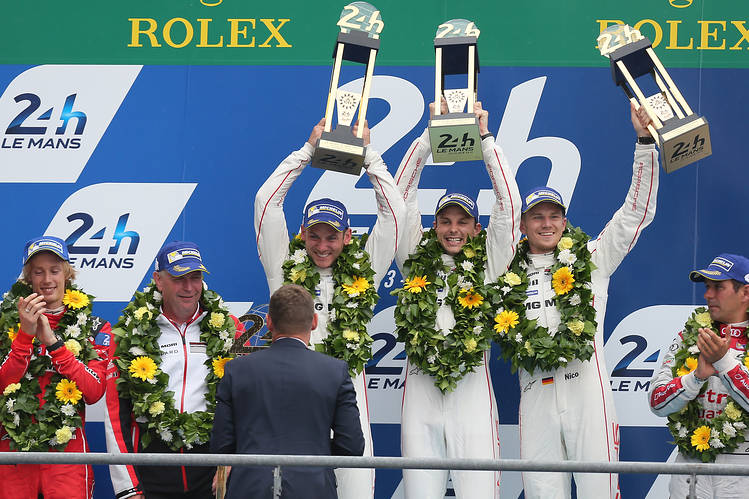 One lap behind, securing second, was the No. 17 Porsche driven by Timo Bernhard, Brendon Hartley and Mark Webber. The No. 7 Audi, helmed by last year’s winning team of Marcel Fassler, Benoit Treluyer and Andre Lotterer, rounded out the podium. Attempting to claw back after troubled minutes in the pits, Lotterer set the fastest race lap ever, a 3.17.4, averaging 154 mph on the 8.5-mile circuit.

In the LMP2 class, the No. 47 KCMG Oreca 05-Nissan car strode home after an almost flawless race, 37 laps behind the winning Porsche. In GTE Pro, the No. 64 Corvette driven by Oliver Gavin, Jordan Taylor and Tommy Milner were able to stay ahead of a gaggle of Aston Martins and Ferraris.

Speaking of heartbreakers: The No. 72 team of Dempsey-Proton Racing, with actor Patrick Dempsey as team principle and driver, just missed winning the GTE AM class in the Porsche 911 RSR, succumbing by a single lap to the SMP Racing Ferrari 458 Italia, driven by, well, people who aren’t famous actors.

Write to Dan Neil at Dan.Neil@wsj.com