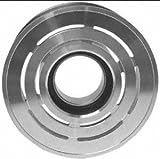 But the entire market was up Wednesday after the Federal Reserve hinted that interest rates will stay near zero. The Dow Jones Industrial Average rose 274 points, or 1.6 percent.

Ford’s early drop came after Morgan Stanley on Wednesday lowered its price targets from $16 to $14, citing potential issues with Ford’s new pickup, which is scheduled to hit showrooms later this year.

“As we understand it, virtually everything that makes physical contact with the vehicle in the production process has been replaced, retrained or substantially augmented,” analyst Adam Jonas said in a research note. “We may remind you that some of Ford’s recent (and far less complex) launches have been plagued with initial quality issues and high recall activity.”

Jonas said competition in the truck market from GMC and Ram will be fierce, saying, “it’s “Hunger Games’ in U.S. autos.”

Jonas said in his research note that, based on Ford’s updated predictions, Morgan Stanley is lowering its 2015 and 2016 profit estimates for the Dearborn automaker by 20 percent and 19 percent, respectively.

Ford stock fell 3 percent Tuesday to close at $14.10 a share, a few pennies off its then-low for the year.

General Motors Co. shares fell below $31 a share Wednesday for first time since May 2013. On Tuesday, the stock fell nearly 6 percent following Jonas’ warning to investors that he was cutting his profit outlook for the Detroit automaker — and his stock price target, to $27 a share from $29.

The stock falls come days before Fiat-Chrysler Automobiles NV is scheduled for its listing on the New York Stock Exchange and Italy’s stock market.