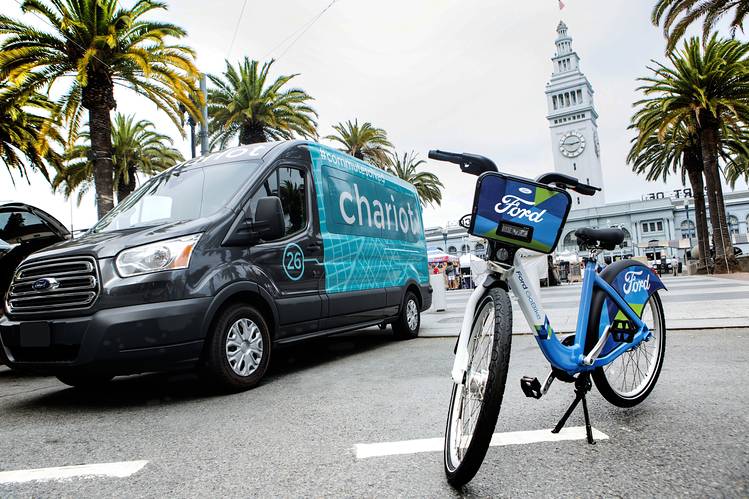 
unveiled on Friday the latest part of its vision for future: bicycles and buses.

The 113-year-old auto maker, whose Model T spawned a billion-plus horseless carriages, is racing other auto makers and upstarts such as Apple, Google and Uber toward a world transformed by innovations such as self-driving cars.

Chief Executive Officer Mark Fields on Wednesday announced the auto maker had agreed to acquire Chariot, a private shuttle service popular in the Bay Area, and that it would sponsor the city’s version of New York’s Citi Bike. Blue Ford GoBike bicycles will become ubiquitous starting next year as the San Francisco program run by Motivate ramps up to 7,000 bikes in 2018 from 700 today.

It also helps boost the company’s profile in Silicon Valley, where it wants to double its staff by the end of next year as it fends off tech companies that are looking to rewire the auto industry. That puts the Dearborn, Mich.-based auto maker in a fierce hiring battle for engineering talent.

“As we move from an auto company to an auto and mobility company, building our brand and being viewed like that is really important,” Mr. Fields said in an interview.

Ford created the Ford Smart Mobility subsidiary in March to explore emerging areas and announced in August plans to release within the next five years a fully autonomous vehicle—one without steering wheels or pedals. The company expects its vehicles to be used initially by ride-sharing and commercial operators.


, the largest U.S. auto maker, has invested $500 million for a stake in Uber competitor Lyft Inc., which is slated to begin testing GM’s self-driving Chevrolet Bolt electric cars this year.

Chariot, which was founded in 2014 and raised about $3 million in seed capital according to Dow Jones VentureSource, uses 100 Ford Transit vans to shuttle riders along 28 routes around the San Francisco Bay Area, charging users on average $4 a ride. It develops routes and stops from users’ home and work addresses, the shuttle company says.

Ford and Chariot declined to disclose the acquisition’s price.

“This is an ideal marriage of our core business and our emerging mobility businesses,” Mr. Fields said.

Chariot will expand to at least five additional metro areas within the next 18 months, Ford said. The service has grown as San Francisco commuters used it as an alternative to the city’s crowded public buses at peak hours.

Chariot differentiated itself from companies such as Uber by providing trained employees who riders see every day rather than contractors, said Stephanie Palmeri, partner at SoftTech VC, an investor in Chariot.

Motivate, the company that manages bike-share programs around the U.S., including New York’s, declined to say how much Ford paid in the companies’ seven-year agreement. All of the bikes will be accessible through the auto maker’s FordPass app.

“I’m not sure Mr. Ford quite envisioned that his company would some day sponsor a bike-sharing program out here in California,” Dave Cortese, chair of the Metropolitan Transportation Commission, told the audience. “He’d probably be saying: `Who would’ve thought?’”

Later, Mr. Fields said: “I’m sure if Henry Ford was alive today he’d take one of these for a spin.”

Write to Tim Higgins at tim.higgins@wsj.com and Tomio Geron at tomio.geron@wsj.com