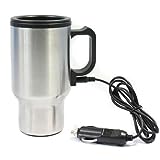 Britain’s biggest trade union demanded Thursday that the government protect the local unit of General Motors from the impact of leaving the European Union as the company discusses a possible sale to French carmaker PSA Group.

There are worries in Britainthat a takeover of GM’s loss-making European division, which includes the Germany-based Opel brand and Vauxhall in Britain, could threaten thousands of jobs in the U.K.

GM and PSA, which makes Peugeot and Citroen cars, have said they are in talks about “strategic alternatives” for GM’s European operations. A deal could include a sale to Peugeot or simply greater cooperation, but it has unnerved unions and governments, as PSA has a track record of focusing on cost cuts in recent years.

The news of the potential deal comes only weeks before Britain is expected to formally begin the process of leaving the EU. Automakers are concerned about losing a place in the EU’s single market because car parts go back and forth across borders, making them particularly susceptible to higher tariffs.

Nissan announced in October that it had received assurances from the British government that leaving the EU would not harm the competitiveness of its products. As a result, the company pledged to continue making its Qashqai and X-Trail models in England.

“It does seem as if Brexitis a factor in this decision as GM does rely heavily on its links throughout the EU supply chain,” McCluskey said. “Without a shadow of doubt, U.K. car plants must be offered the same assurances as those given by the government to Nissan.”

Vauxhall employs 4,500 people at plants in Ellesmere and Luton, which make the company’s Astra and Vivaro models. Tens of thousands of other jobs are connected to Vauxhall’s operations, including workers who make parts for the vehicles. Germany has also expressed concern about the impact on jobs of a possible takeover.

“There is some way to go in discussions between GM and PSA, but I was reassured by GM’s intention, communicated to me, to build on the success of these operations rather than rationalize them,” Clark said in a statement after the meeting.