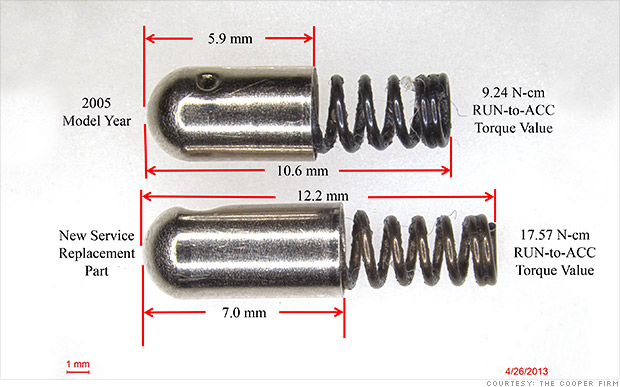 This is the 57-cent part at the center of GM’s recall crisis.

More crashes are now being attributed to faulty ignitions in General Motors vehicles.

GM (GM, Fortune 500) has raised the number of frontal-impact crashes linked to the problem ignitions to 47 from 32, according to company spokesman Greg Martin.

Because of the flawed ignition, key rings holding more than one key could cause the ignition to suddenly switch to the accessory or off position. That can lead to a loss of power — disabling power braking and steering and interrupting airbags from deploying in an accident.

GM says the number of deaths tied to front impact crashes stemming from this defect remains at 13.

The National Highway Traffic Safety Administration chided the automaker for the way it handled the recall and said that the number of deaths tied to the problem was likely higher.

“GM knew about the safety defect, but did not act to protect Americans from that defect until this year. The families and friends of those lost in the crashes have the deepest sympathies of everyone at NHTSA. They deserve straight answers about what happened to their loved ones,” NHTSA said in a statement.

“The final death toll associated with this safety defect is not known to NHTSA, but we believe it’s likely that more than 13 lives were lost,” NHTSA said.

GM spokesman Jim Cain said the automaker was aware of the NHTSA statement and that “if necessary we will adjust the number.”

Related: Steps to a recall nightmare

GM has come under fire for the way it handled the flawed ignition switch.

Company employees knew about the defect for more than a decade before a recall was initiated in February 2014. So far, the automaker has recalled 2.6 million cars worldwide due to the ignition switch.

The company has initiated 30 separate recalls covering 13.8 million U.S. cars and trucks, and 15.8 million vehicles worldwide, in 2014. That’s more cars and trucks than GM sold in the five years since emerging from bankruptcy protection in 2009.

So far GM has agreed to pay the maximum fine of $35 million to NHTSA for the delay in the ignition recall. And it will be subject to closer oversight by the regulator.

GM shares are down 18% this year, lagging behind rivals Toyota (TM) and Ford Motor (F, Fortune 500).