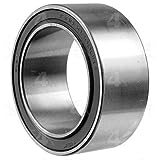 At least once a year, the parts makers can now renegotiate terms when hit by unexpected economic pressures, such as currency fluctuations, GM’s purchasing chief said Friday. The move, which is primarily aimed at suppliers based in the U.S. and Canada, comes as GM prepares to invest $5 billion over the next decade to develop a new group of Chevrolet vehicles to sell in Mexico and Brazil starting with the 2019 model year. Those vehicles are also destined for India and China.

The concession is unusual for GM, which historically fights for ironclad contracts that squeeze suppliers dependent on them for business. But the Detroit auto maker, which spends $85 billion annually as the world’s largest car-parts purchaser, needs to avoid production disruptions by ensuring suppliers don’t succumb to financial strain.

Economic turmoil in Brazil may be lessening GM’s leverage at a time when the auto maker wants to roll out cars there. “There is a lot of hesitancy by suppliers to invest there,” Steve Kiefer, GM’s purchasing chief, said in an interview. “But we are focused on the Brazil market, and we want to work together with our suppliers to make that work.”

Mr. Kiefer has been exploring new strategies for dealing with suppliers since taking the purchasing helm at GM in late 2014. A veteran of Delphi Automotive
DLPH

“What we have today are fixed, very rigid contracts and we tell the suppliers don’t bother us with the details,” Mr. Kiefer said. “On a very narrow band of business, that approach works. But when you have moving raw-material costs and currency rates, you find yourself spending too much time fighting over that.

“What we are trying to do here is take that all off the table by adopting a simple formula that is more predictable and allows both sides to share in the ups and downs of those costs.”

Scott Paradise, a marketing executive for GM supplier Magna International Inc., said the auto maker’s new contract deal shows a more collaborative approach that should aid the Canadian-based parts maker. “We now have a chance to recoup some of the costs you just weren’t planning on hitting your business,” he said.


of Japan took the top spot in the survey by Planning Perspectives Inc.

“I have never heard anything like this before,” said John Henke, president of the Birmingham, Mich.-based firm, referring to GM’s plan for renegotiated contracts. “It will be prudent for the other auto makers to quickly follow since about 70% of their revenue is spent on suppliers.”