GM: The Best Stock To Bet On Self-Driving – Seeking Alpha

By now, you’re tired of seeing news on how self-driving is about to arrive, and also how it may revolutionize car ownership and ride sharing. If you agree with those news, you’re probably thinking, “How can I profit?” and, “What’s the best stock for playing this?” This article will give you a possible answer, and this answer will be surprising.

In my view, the best publicly-quoted stock to play the self-driving revolution is… drum roll… General Motors (NYSE:GM). Yes, the General Motors dinosaur. Don’t throw those tomatoes yet. I will thoroughly explain why.

First, The Most Important: The Technology

Fortunately, we have at least a limited answer to that question: It got a leg up on the self-driving technology race. We know this because recently, the California DMV published the Autonomous Vehicle Disengagement Reports for 2016. These reports are the hardest data the market has on the relative positions of the players testing self-driving cars, even if they apply only to California’s public roads.

For sure, there will be lots more testing going around in private circuits, as well as in simulations. But remember, the ultimate objective is to have the self-driving systems performing on public roads. So testing on public roads is the closest we’re going to get to a valid sample of where each competitor sits. This is so even if we might still be comparing Granny Smiths to McIntoshes due to different disengagement definitions, different roads, different testing conditions. Ultimately, they’re all still Apples (to Apples).

These reports showed us a couple of things regarding General Motors’ competitive position. They showed that: 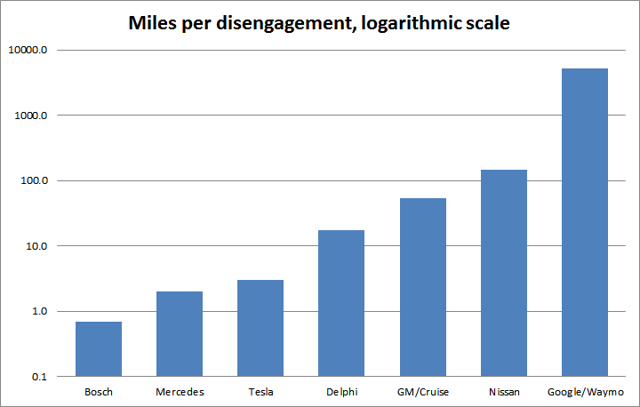 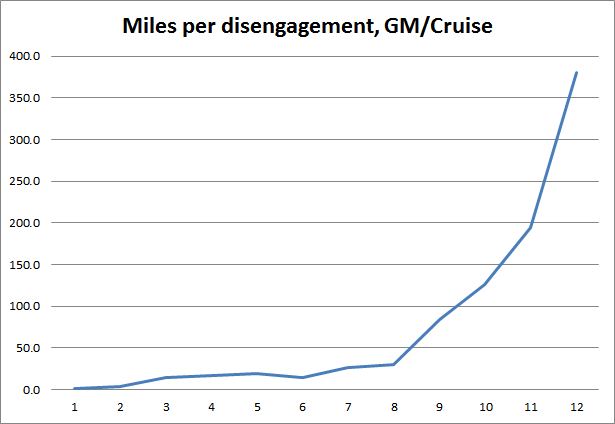 Moreover, in a devious way, General Motors’ testing also shows how able General Motors seems to recently be when approaching new technology spaces. You’ll notice that General Motors has been using Bolt EVs for its testing (after starting with Nissan (OTCPK:NSANY) Leafs).

Of course, the California DMV reports also showed that Google (NASDAQ:GOOG) (NASDAQ:GOOGL) remains ahead of all others, even if the relative advantage over General Motors is likely overstated by Google’s use in less-dense conditions. However, there’s some qualification needed here:

What this qualification implies is that General Motors is nearer Google/Waymo than it seems, though Google is still likely to be the leader in self-driving by a fair margin.

General Motors had already released a video of its self-driving Bolt in the middle of San Francisco:

This video, at the time, was probably seen as a demo video, akin to Tesla’s (NASDAQ:TSLA) much weaker demo for the Model X. However, General Motors has released another video, as follows:

Is this yet another “demo”? Not quite. Together with its release, we have some important commentary from General Motors, which goes as follows (bold emphasis is mine):

This video was captured from one of our autonomous vehicles during a series of back to back test rides. No advance planning was done, and this was captured in a single take. The operator selected a random destination using the Cruise mobile app, pushed a button, and the vehicle started moving. Rides like this occur hundreds of times per day across our test fleets.

Keep in mind, we actually already knew that General Motors already had the ability to run lots of faultless rides. We knew it because by November 2016, General Motors was running for 380 miles on average, between disengagement. But still, seeing is believing.

Another competitor that could arguably be ahead of General Motors would be Nissan. As we saw in the chart above, Nissan actually seems to be in second place when it comes to miles/disengagement. 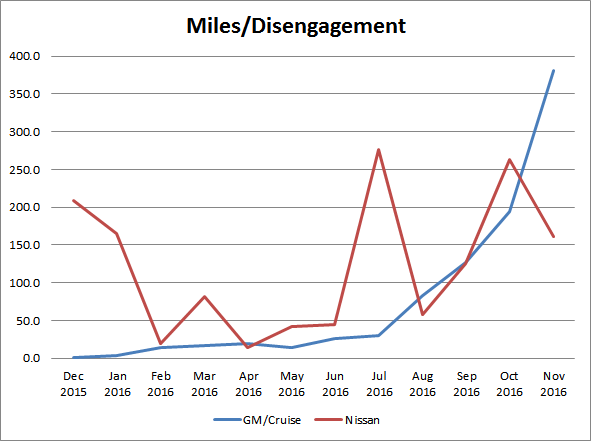 On top of this, GM completed 9,776 testing miles while Nissan completed just 4,099. Nissan is sure to be testing much more in Japan, but from what we see in its California testing and GM’s quick improvement, it’s fairly likely that GM is already ahead in its efforts.

Why General Motors As A Stock, Then?

With stocks like Google, the likely self-driving leader, or Tesla, the people’s favorite, why would I say that General Motors is the actual stock that could benefit the most from self-driving?

The reason is twofold:

This second point bears explanation. We can start with Morgan Stanley’s Adam Jonas and the value he ascribes to ride sharing when it comes to Tesla. When Adam Jonas recently raised Tesla’s price target, he ascribed ~25% of his $305 target to “Tesla Mobility,” which is the service Tesla supposedly will have once it attains self-driving ability.

Given these two items, we can say that if self-driving is worth an additional $14.2 billion to Tesla (on top of the cars it might sell because of having the capability), then it’s worth at least $14.2 billion to GM as well, which:

And if self-driving is thus worth at least $14.2 billion to GM (like it supposedly is to Tesla), then consider:

In fact, Google’s market capitalization is so much larger than GM’s that it requires us to believe Google will arrive at self-driving much sooner and wring a much higher value from it (for it to be a better choice “on self-driving”)!

Google has spun off its self-driving efforts into an internally separate company, Waymo. It’s conceivable that Google could IPO or spin off Waymo into a separately-listed company. Were this to happen,

For now, General Motors isn’t just a potential leader in self-driving. It’s also a huge automaker. As an automaker, it’s exposed to the vagaries of the cyclical auto market.

The auto market in the United States is arguably stretched and has relied on a lot of subprime lending in the last few years. At the same time, in China, the sunset of easier taxes on autos pulled forward demand into 2016 year-end which is now leading to weakness in early 2017 (sales fell nearly 10% year on year in January).

Given these two effects, it’s perfectly possible that the market will entirely ignore General Motors’ positioning on self-driving cars and instead pay attention to the current cyclical headwinds in the auto market.

General Motors is a strong contender for being the company that’s closest to deliver self-driving, though Google likely remains somewhat ahead. We now know another often-cited leader, Tesla, lags severely behind.

If General Motors is the first company delivering self-driving or is very close in doing so, as now seems likely, then General Motors will reap significant value gains from its leadership. For the same level of gains, General Motors is a better bet than Google, simply because it has a much lower market capitalization to begin with.

Does being a leader in self-driving assure near-term stock gains, though? Not necessarily. The auto market is highly cyclical and there’s arguably a financing bubble in the US. General Motors participated in that bubble, both because of its finance subsidiary and because it benefited from the resulting higher demand. So if the financing bubble comes home to roost and the auto cycle turns at the same time, GM could potentially suffer – self-driving or not.

Disclosure: I am/we are short TSLA.